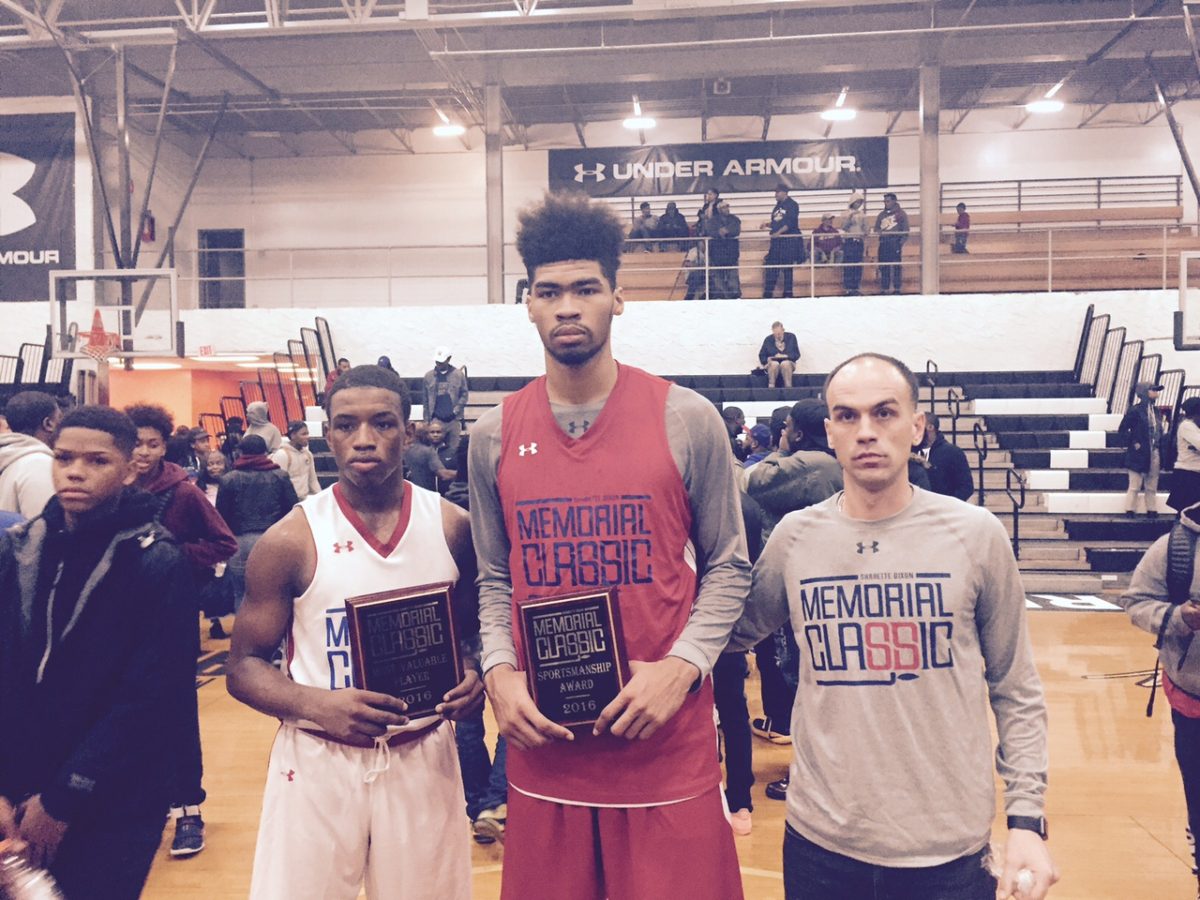 NEW YORK — After scoring 27 points and winning the MVP award at the Sharette Dixon Classic on Saturday night at the Gauchos Gym, Isaiah Washington was trailed by a small army of young boys who thrust their phones into his hand one by one. The younger boys were all awed by Washington’s highlight-reel performance in the game and wanted his cell phone number. One at a time, Washington took the phones and entered his digits, all while giving an interview to a reporter. “It’s a big accomplishment [to win MVP],” Washington, a senior at St. Raymond’s in The Bronx, said after leading the New York Upperclassmen to a 103-92 victory over the New Jersey Upperclassmen. “A lot of great players have played in here, and I just wanted to show I’m one of the best players here.” He added: “If it wasn’t for these people, I wouldn’t be the person I am today.”

A young crew has electrified NYC basketball like it hasn’t been in years.

Washington entertained the crowd all night, including one play where he bounced the ball off a defender’s face before draining a three-pointer to the crowd’s delight.

The 6-foot-2 Washington faced — and beat — his future Minnesota backcourt-mate Jamir Harris. The two chatted after the game and took a picture together. “He definitely played real well, got the crowd into it,” Harris said. “That’s what he does, so he did a real good job of making the crowd happy to be here.” Minnesota head coach Richard Pitino and assistant Kimani Young locked up both players this fall giving them a tough and confident backcourt for the future. “We’re going to be a force to be reckoned with,” Harris said. “I think a lot of people are sleeping on us and how good we can be together. Once we get down there, we’re going to show what we need to show and we’re going to open up a lot of things worldwide.” Said Washington: “We played against each other since we was young and playing against each other now is real good, and we just can’t wait to be on the floor together at Minnesota. “[We can do] a lot of damage. He can shoot the ball real good and I can pass real good.” Longtime New York recruiting expert Tom Konchalski said Washington showed out in the Sharette Dixon game, but will need to be more of a distributor — and less of a scorer — once he gets into the Big Ten Conference. “This is his game, there may not be a better showtime player for this stage than Isaiah Washington,” Konchalski said. “His role is going to be different. He’s not going to be scoring 27 points at the next level. And if he is the Golden Gophers aren’t going to be winning games. Your point guard has to make everyone around him better. Not that he won’t score, he can be a double-figure scorer. But if he’s their primary scorer, they’re not going to do well in the Big Ten.” Meantime, Harris is a natural shooter and scorer, even if he’s a bit undersized for future levels. “It will be a small backcourt, like two 6-1s, but it’s a good backcourt,” he said. ” Washington is the leader of the “Jellyfam,” a group of players who got the nickname because of their ability to score in unique ways. He goes by @Jellyfam_Dimes on Twitter and is the first athlete to hit one million views on Overtime. That group includes Washington, Leondre Washington, Jordan Walker, Jahvon Quinerly, Sid Wilson and Milicia Reid, the only female member of the group. “In order to be in Jellyfam, you gotta do three jellys on somebody in one game,” Washington explained. “A jelly’s a finger roll.” He added: “If the people complete the task, then they could be in the jellyfam” What about Harris? “I don’t really jelly, that’s a skill honestly,” he said. “Only a few people got the knack to do it like Jordan over here.” Asked if he wants to be a member, Harris smiled and said, “No, I’m good, that’s not really my thing.”   Follow Adam Zagoria on Twitter And like ZAGS on Facebook