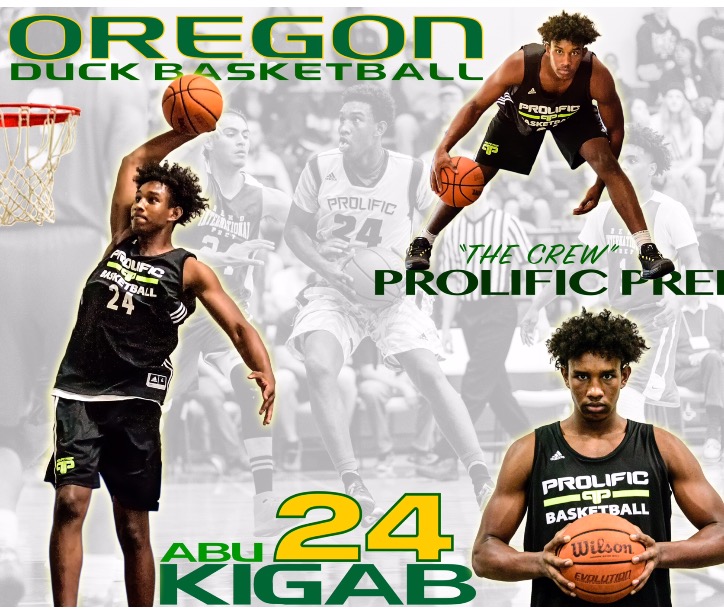 Abu Kigab, the 6-foot-7, 215-pound forward from Prolific Prep (CA), verbally committed to Oregon over Illinois on Friday, he told ZAGSBLOG. Kigab was born in Sudan in 1998 and moved to Canada in 2008 as he was turning 10. “I will be attending the University of Oregon for the upcoming season,” he said by phone. “There were many reasons, but mostly I really liked the vibe, the people there, the coaching staff, the players. Overall I just had a very good vibe when I went there. I’m really looking forward to attending school there next year.” Kigab visited Oregon Sept. 10 and Illinois Sept. 16, but said he fell in love with the Oregon campus. “It was just a great visit,” he said. “I went there when it was pretty calm, there weren’t that many students and I went through the campus, saw everything. I really liked what I saw. There’s no way you can’t be successful at the University of Oregon because they got everything you need to succeed and now it’s all up to you to complete the mission so it’s going to make me grow as a person. I’m kind of doing my own thing where I’m going to be more comfortable for the things that I do.” Kigab joins point guard V.J. Bailey in Oregon’s Class of 2017 class. Bailey committed last week. “They’re looking for me to us my versatility,” Kigab said. “I can guard 1-4. I can also score the ball, play 1, 2, 3, 4. They’re really looking to use my versatility and putting me on the court and having me be a matchup problem, a defensive nightmare for teams.” Kigab continues Oregon’s strong Canadian connection. They have Dillon Brooks, Chris Boucher and Dylan Ennis on their current roster and were also close to landing former Kentucky star Jamal Murray. “It’s a good connection,” he said. “Oregon started a pipeline to Canada and I want to be one of those players in that great dynasty. It’s going to be really great. One of my really close friend Dillon Brooks went there. He’s kind of like a big brother to me, so I talk to him about everything. I told him a little while back that I really wanted to come there.” Brooks could be gone to the NBA by the time Kigab arrives. He is one of three Oregon players projected in the 2017 Draft by DraftExpress.com. “I don’t know, man,” Kigab said. “He had a heck of a season last season and I’m expecting nothing less from him season. Most likely I don’t think he’s going to be there but if he’s there we’re gonna jell. It’s gonna be fine.” Oregon remains in the mix for several Class of 2017 stars, including Trevon Duval, Troy Brown, Ira Lee and Canadians Lindell Wigginton and O’Shae Brissett. Kigab was the second Prolific Player to commit on Friday, following point guard Paul Scruggs to Xavier. “Abu has the tools, toughness and mindset to be a elite lock down defender at the next level,” said his AAU coach Dwayne Washington of UPlay Canada. “He is able to shoot the three at a high level as well. He has the package and intangibles to max out as a Draymond Green-type player.” And like ZAGS on Facebook

At Big Blue Madness, Kentucky Breaks Out Former Stars in Hopes of Landing New Ones