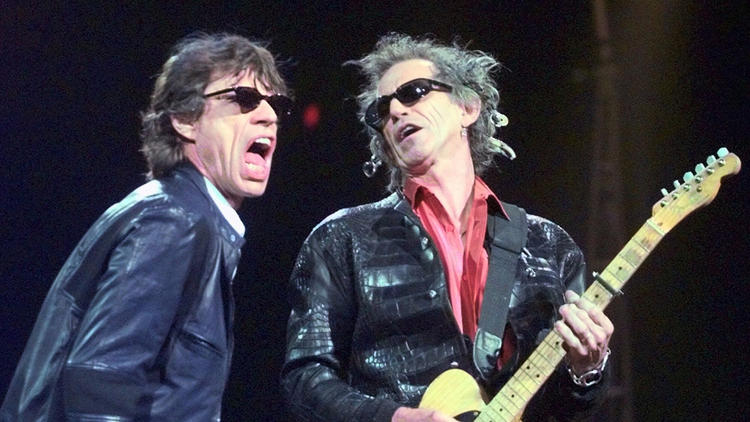 Mick Jagger and Keith Richards are expecting some musical “cross-pollination” at the “Old-Chella” festival in October. And history could be made in the process. “One would hope there would be some cross-pollination,” Jagger told David Fricke last week on The Spectrum. “There could be some interesting combinations,” Richards told Fricke. With two three-day bills including Bob Dylan, The Rolling Stones, Paul McCartney, Neil Young, Roger Waters and The Who set to perform Oct. 7-9 and Oct. 14-16 in Indio, California at the Empire Polo Club, the potential for musical permutations at the event billed as Desert Trip is extraordinary. (Unfortunately, Led Zeppelin will not reunite at the event for the first time since their critically acclaimed 2007 performance at London’s 02 Arena because Robert Plant is opposed to getting the band back together.) Dylan and The Stones are set to play full sets on the Fridays, with McCartney and Young on Saturdays and Waters and The Who Sundays. Fricke never directly asked Jagger or Richards if they planned to remain at the event beyond the first Friday, but now with two weekends set, the performers will likely stick around through the week, making cross-pollination even more likely. “Bobby Dylan, Paul, The Who, Neil Young … None of these guys have been in the same town on the same day,” Richards said. Jagger said Dylan is the only other performer on the bill with whom the The Stones have shared a stage. In 1985, I was a 16-year-old rising high school senior at Live Aid in Philadelphia when Dylan played ‘Blowin in the Wind’ with Richards and Ronnie Wood. Dylan and The Stones (with Mick) also did “Like a Rolling Stone” together in Rio. Richards told Fricke he’s already begun to think about songs The Stones might play to open their post-Dylan show as a way of linking the two acts. “Like a Rolling Stone” anyone? Would McCartney and The Stones possibly play a song or two together? That could be the highlight of the weekend. John Lennon once played with the supergroup “The Dirty Mac” that included Richards, Clapton and Mitch Mitchell. Lennon put the group together for The Stones’ 1968 TV special Rock and Roll Circus. Though rivals in their early years, the Beatles and the Stones remained friends, and Jagger ultimately inducted The Beatles into the Rock ‘n’ Roll Hall of Fame in 1988. Jagger then helped Dylan, members of The Beatles and others like Billy Joel and Bruce Springsteen do “I Saw Here Standing There.” Meantime, Neil (like everyone else) was heavily influenced by The Beatles and inducted McCartney into the Rock ‘n’ Roll Hall of Fame in 1999. “I think he’ll be remembered hundreds of years from now for the work he did,” Young said of McCartney. A duet between the two on Oct. 8 doesn’t seem too far-fetched. In 2009, they played “A Day in the Life” together in Hyde Park. Old friends Dylan and Young have shared the stage on several occasions, including in this 1975 version of “Helpless.” They also played together at the “Bob-fest” event at Madison Square Garden in 1993 (along with Eric Clapton, George Harrison, Tom Petty and Roger McGuinn.) Dylan and Young could do a back-to-back of “Hurricane” and “Like a Hurricane” and trade licks on each other’s songs. As for Sunday’s possibilities, Richards and Fricke joked that all the other acts could come out and place a brick in “The Wall” during Waters’ set, which Waters said is likely to be heavy on Pink Floyd classics. Who knows what musical cross-pollination we might see at “Old-Chella,” but it sure sounds like some is in the works. Follow Adam Zagoria on Twitter And like ZAGS on Facebook