Harry Giles Commits to Duke, Says He Will Be 'Fine' After ACL Tear | Zagsblog
Follow @adamzagoria

Harry Giles Commits to Duke, Says He Will Be ‘Fine’ After ACL Tear 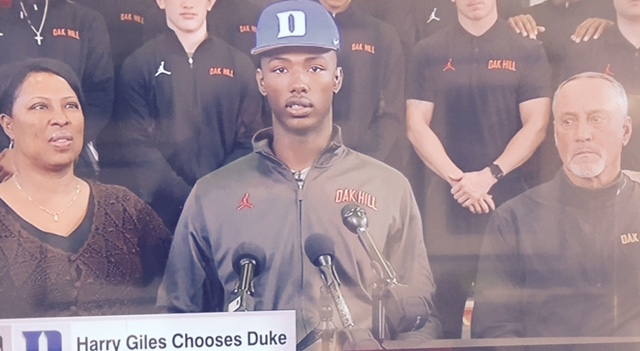 One day after it was revealed that he had suffered his second torn ACL, Harry Giles got his college situation squared away by pledging to Duke on ESPN. The Blue Devils had long been considered the favorite for the 6-foot-10, 230-pound Oak Hill Academy (VA) power forward and his ACL injury on Tuesday night obviously didn’t change things. “I felt like Duke was the place for me,” he said on ESPN. “Every time I go to Duke it feels like home. Every time I sit down and talk to Coach K it’s a special feeling. Every time we talk, it’s always the same feeling, it feels great. Not different vibes every time we talk, it’s always the same thing. So I felt like family was at Duke and I just felt comfortable there.” Duke won out over Kentucky, Kansas and Wake Forest after North Carolina had been dropped from consideration. As for the ACL injury to his right knee which followed an ACL/MCL tear in his left knee during his sophomore year of high school, Giles was asked if he considered skipping college, rehabbing and going straight to the NBA in 2017. “No, I just gotta take it slow,” he said. “It’s unfortunate that it happened, but I look forward to rehabbing and getting back so I’ll be fine. Just going to take it step by step.” ESPN injury analyst Stephania Bell said there’s no reason to think he won’t recover completely from his second ACL injury. “He recovered well enough from the first one…there’s no reason to think he won’t recover just as well  from this one,” she said on ESPN. “And Duke has a fantastic rehab team. They were the first Division 1 sports fellowship in the country so they know how to do rehab and they know how to do basketball, so I think he’ll be just fine there.” Bell also pointed out that Nerlens Noel and Jabari Parker, who also underwent ACL surgery, are “thriving” in the NBA. After Giles recovers from his ACL injury (which generally takes 6-9 months), Giles will team up with his close friend and USA Basketball teammate Jayson Tatum to form a potentially deadly combination at Duke. Tatum and Giles are projected as the No. 1 and 2 picks in the 2017 NBA Draft by DraftExpress.com, meaning they likely won’t be on campus long. “[Tatum] knows I’ve gotta do what’s best for me the same way he did, but Duke is a school that’s high on my list and if it works out like that it’s gonna be a problem!” the 6-foot-10 Giles wrote recently on his USA Today blog. Giles also joins point guard Frank Jackson and forward Javin DeLaurier in Duke’s 2016 class. Giles and Tatum could be the latest one-and-dones to Duke, following Jahlil Okafor, Justise Winslow and Tyus Jones last year and Jabari Parker and Kyrie Irving in recent years. “Obviously, it’s not ideal for him to miss another full year of development at such a crucial age,” Jonathan Givony of DraftExpress.com told SNY.tv of Giles. “But ACL tears today aren’t what they were 20 or even 10 years ago. “He’s young enough that he can definitely make a full recovery from it and regain his status as a top prospect for the 2017 NBA Draft. Some teams may be wary, but a lot will come down to what their doctors think. In particular, what is the liklihood of him staying healthy long-term? Not all ACLs are the same. Some are worse than others. He has 19 months to build himself back up before the 2017 NBA Draft. That’s a very long time. If he rehabs the right way and shows he heals accordingly, I think he’s still a very strong candidate to be picked extremely high.” Of course, it’s also possible Giles could spend two years on campus because of the setback of missing one year with the injury. “It might mean that he’s going to take himself out of the position of being a one and done and now he’s going to be a two and through,” longtime New York recruiting expert Tom Konchalski said. Konchalski believes Giles — who averaged 14 points and 10.6 rebounds last summer as the USA U19 team won the World Championships in Greece — will come back strong from the injury but will have to play “catch up.” “He missed the year so he’s going to have to play catch-up,” he said. “However, when he came back from his torn ACL [and MCL] which knocked out his entire sophomore season, he came back 100 percent.”