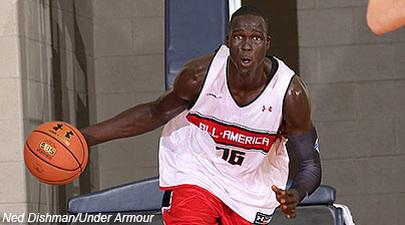 Thon Maker will choose a college in the spring and is planning official visits to two schools at this point, Ed Smith, Maker’s guardian, told SNY.tv on Thursday. The 7-foot Maker will take officials to Arizona State and Notre Dame, Smith said. Indiana and St. John’s are among the other schools involved, but officials to those schools aren’t definite. Maker is slated to take the SAT on Saturday and can’t take officials until then. “As the season goes on, that’s what we look forward to do,” Maker recently told SNY.tv. “Last year I got a chance to take a few visits on the road so I really want to do something like that again. I know I’ll definitely take a few, if not all my officials on the road also, but I don’t know any particular dates.” Maker had originally considered spending only half of this season at Orangeville Prep in Ontario, but now plans to spend the whole year there before heading to college in the fall of 2016. He is currently projected as the No. 24 pick in the 2017 NBA Draft by DraftExpress.com. The NCAA early signing period runs Nov. 11-18.

Jayson Tatum Replaces Harry Giles as Projected No. 1 Pick in 2017