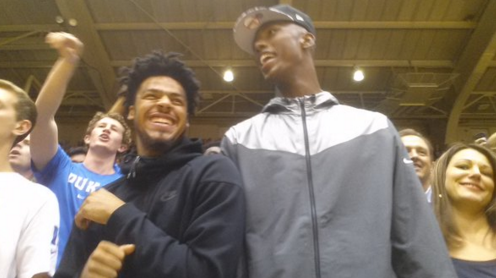 By JACK LeGWIN DURHAM, N.C.- The Cameron Crazies did their best on Friday night to convince Harry Giles to be the next great Blue Devil. With Emmitt Smith, Quinn Cook, Nolan Smith, and many others in the crowd to watch the Blue Devils in their exhibition opener against Florida Southern, the Crazies Chanted “Harry Giles, come to Duke,” as well as “Harry Giles, sit with us,” to which, he eventually did.  Ranked No. 1 in the nation by 247 Sports, Giles is projected to be the No. 1 overall pick in the NBA Draft in 2017 by DraftExpress.com. Duke has already received commitments from Giles’ good friend Jayson Tatum, Frank Jackson and Javin DeLaurier.  He is also considering Kentucky, Kansas and Wake Forest and is expected to announce during the early signing period. Photo: Blue Devil Nation Follow Jack on Twitter