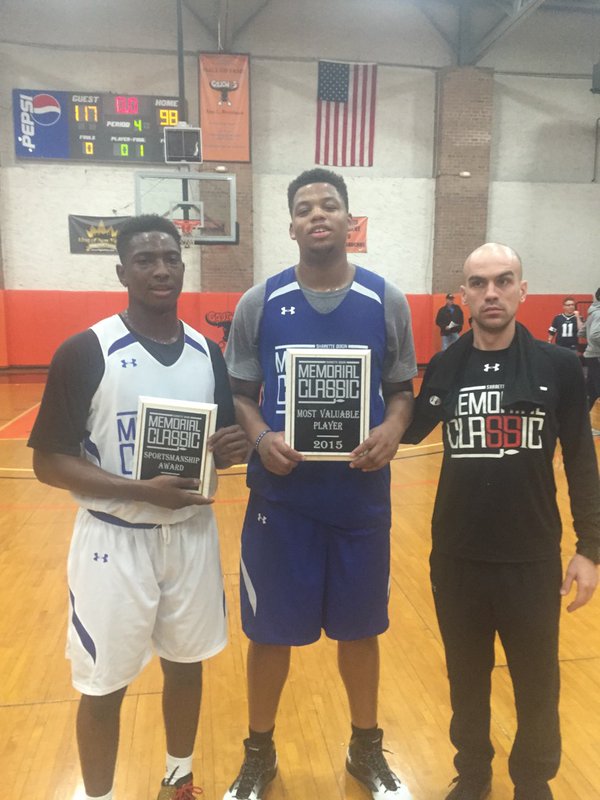 NEW YORK — A year from now, Omari Spellman will be playing in the Big East Conference and T.J. Gibbs will be on display in the ACC. On Sunday night at the Sharette Dixon Memorial Classic, both players gave an advanced preview of what they will be bringing to college next year. The 6-foot-9, 270-pound Spellman, who has committed to Villanova for the Class of 2016, went for 24 points as the New York upperclassmen beat New Jersey, 117-100, at the Gauchos Gym. The 6-3 Gibbs, who is headed to play at Notre Dame, scored a game-best 26 points in the loss. Former Seton Hall assistant and current Lincoln coach Tiny Morton coached New York to the win, while former Rutgers coach Mike Rice coached New Jersey in the loss. 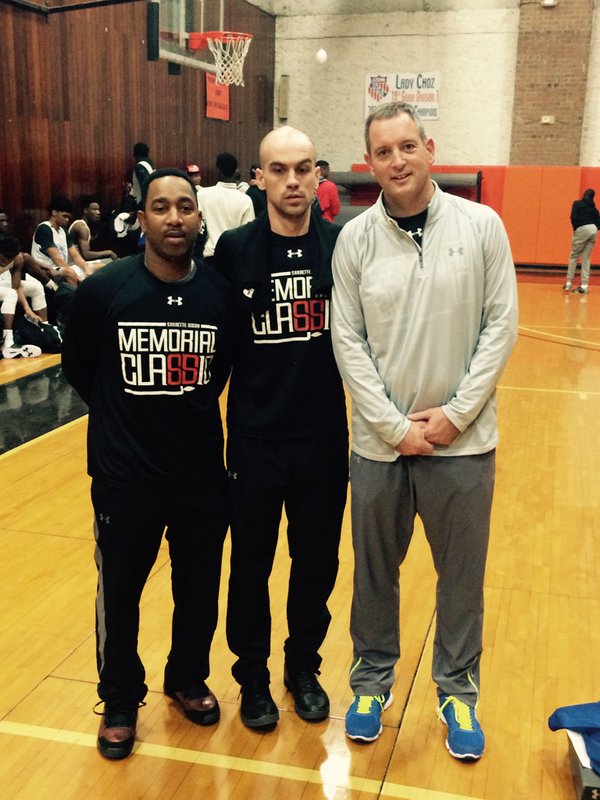 “It just felt good to be back in New York,” said Spellman, who pledged to coach Jay Wright’s team back in February. “I haven’t played here in quite some time after transferring to school [in Ohio], but it was just good to be back and get the MVP.” Spellman, who runs with the PSA Cardinals AAU program, was born in Cleveland but then moved back to New York with his father. He transferred over the summer to St. Thomas More in Oakdale, Conn. He is still working his way back after sustaining an injury that “messed up my ankle real bad” at the Peach Jam and sidelined him for the rest of the summer. “I’m just trying to get back in shape, man,” he said. “Before I got hurt I was probably in the best shape of my life. I”m just trying to get back to there and better.” Spellman said he wants to get down to 250-255 pounds as his ideal weight. He looked like a force in the paint, throwing down five dunks, and at one point taking 6-11 Patrick School junior Nick Richards off the bounce on the perimeter for an easy layup. “I know I didn’t shoot it well today but that’s a part of my game, being able to put the ball on the floor, post up, just being an offensively versatile player and play defense as well,” Spellman said. With a year at St. Thomas More before he gets to the Big East, Spellman will play for coach Jere Quinn, who has coached numerous high-major D-1 and pro players. “Just fine-tuning some things,” he said. “I know Nova has some things they want me to do, but I’m really mostly worrying about the defensive end and being able to guard at that level.” Spellman could end up staying at Villanova for less than four years if he’s able to continue working on his body and his game. “The whole key here is conditioning and he’s in much better shape,” longtime New York recruiting expert Tom Konchalski said. “He gets up and down the floor, he doesn’t take plays off. He played aggressively around the basket and he’s healthy, and that’s the whole key. “He’s a load inside. He has great hands, he can really rebound. He can score inside and he can step back and shoot 3’s. In the past he’s been too 3-point oriented for his size, but he played very impressive.” Gibbs was also impressive in the loss. “He plays for result, not for effect,” Konchalski said of the Seton Hall Prep guard who chose the Irish in May over Oklahoma, Providence, Georgetown and Boston College. “He’s not pretty, he doesn’t do all these fancy things, the one-on-one moves. He goes hard to the basket, finishes plays, defends, plays both sides of the ball. He’s going to be an outstanding guard at Notre Dame.”   FREE THROWS For New York, Keith Williams of Bishop Loughlin and Jahlil Tripp of Lincoln scored 15 points apiece, while Monmouth-bound Ray Salnave of Cardozo and Virginia commit Ty Jerome of Iona Prep scored 14 each. For New Jersey, uncommitted Roselle Catholic junior Nate Pierre-Louis scored 18 points and Georgetown-bound guard Jagan Mosely of St. Anthony’s had 15…St. John’s commit Shamorie Ponds did not make the game for New York because of injury (turf toe).

T.J. Leaf Enjoys UCLA Visit, No Timetable on a Decision