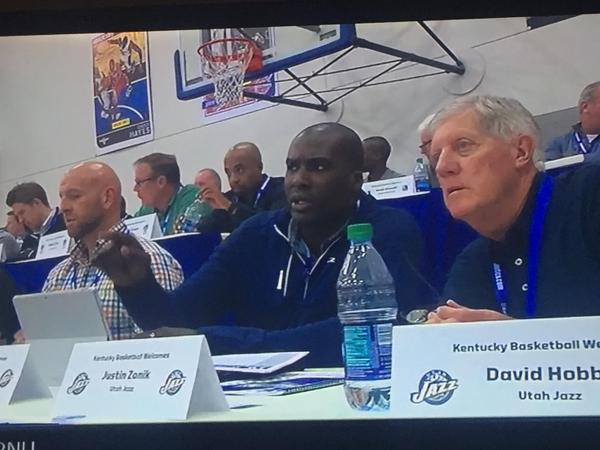 All 30 NBA teams were in attendance Sunday night for Kentucky’s Pro day, which was televised on ESPNU. According to DraftExpress.com, Kentucky features players projected to go No. 1 (Skal Labissiere), No. 6 (Jamal Murray), No. 18 (Isaiah Briscoe), No. 28 (Marcus Lee) and No. 58 (Alex Poythress) in the 2016 NBA Draft. The 6-foot-11 Labissiere has not yet been cleared by the NCAA because of an amateurism issue, not an academic one, ESPN’s Andy Katz confirmed on air, presumably because of what has previously been reported about his guardian, Gerald Hamilton. DraftExpress.com also has sophomore point guard Tyler Ulis at No. 38 in the 2017 draft, though many think he may come out after this season. Kentucky coach John Calipari has produced 27 NBA players while at Kentucky, and a Top 10 pick for eight years in a row. LSU will run its combine this week as well, but it’s not expected to be televised. LSU features 6-foot-10 forward Ben Simmons, the projected No. 2 pick who many feel should go No. 1, the projected No. 29 pick in Tim Quarterman and freshman guard Antonio Blakeney.

“UK has more depth which makes a combine much more interesting,” one veteran NBA scout said. “LSU has three top prospects but lacks depth for a quality combine.” A year ago, all 30 NBA teams attended Kentucky’s initial combine, and six Wildcats were selected in the 2015 NBA Draft. AAU programs like the Albany City Rocks and PSA Cardinals then followed suit and held their own combines for college coaches.