In North Jersey, Three Schools Boast 24 Division 1 Basketball Prospects, Much to the Delight of College Coaches

JERSEY CITY, N.J. — One afternoon early last week, Georgetown assistant coach Kevin Broadus pulled his rental car into the parking lot at the Community Education and Recreation Center in Jersey City — the St. Anthony’s High School practice facility known as the CERC. Once inside the gym, Broadus was one of several Division 1 assistant coaches watching an open gym featuring the Friars, the program run during the season by legendary Naismith Hall of Fame coach Bob Hurley. Georgetown already has one player committed from St. Anthony’s in senior guard Jagan Mosely. And the Hoyas probably wouldn’t mind adding a few more, either. St. Anthony’s has a lot of options for college coaches to choose from these days: 10 of their players hold Division 1 scholarship offers. Ten. Two days after his trip to St. Anthony’s, Broadus visited nearby New Jersey powerhouses St. Patrick’s and Roselle Catholic and watched open gyms there, too. Again he was not disappointed. St Pat’s features another seven players with D-1 offers, and Roselle Catholic also has seven. 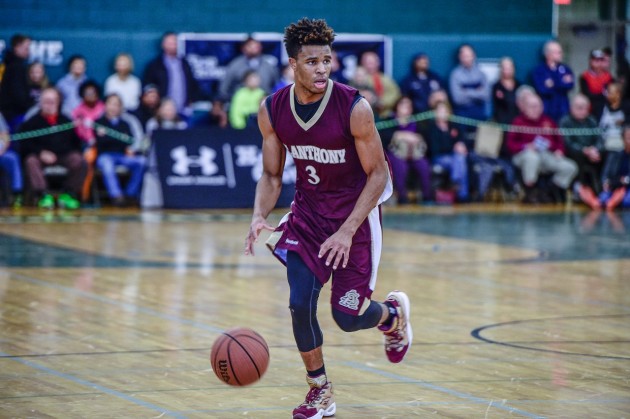 All told, that makes 24 players with Division 1 scholarship between the three schools. And of those 24 players, only two –Mosely and Rhode Island-bound forward Cyril Langevine of St. Patrick’s — are committed, meaning there are plenty of talented, young, uncommitted prospects at the Big 3 North Jersey schools. Those three schools, which will mostly run roughshod over their public school brethren in New Jersey, are within a 20-mile radius of one another. And they all compete in the brutal New Jersey Non-Public B state tournament bracket. Between them, St. Anthony’s, St. Patrick and Roselle Catholic have enough D-1 talent to fill nearly two college basketball rosters — or to have five different five-on-five teams that could hold their own in most gyms in the country. That does not even include other North Jersey powers like St. Benedict’s Prep, Blair Academy, Seton Hall Prep, Hudson Catholic, Pope John XXIII and St. Joe’s-Metuchen, which recently added Syracuse-bound guard Tyus Battle via transfer from Gill St. Bernard’s. “You can see as much [talent] as anywhere in the country there, what I’ve seen in the last week,” Broadus, speaking generally about talent in North Jersey because he cannot comment on specific recruits, told SNY.tv. “It’s been like that forever here in D.C. But it seems like Jersey has caught up talent-wise with everybody in the country. That’s one thing I will say. It’s not like you can just go to California or D.C. or Georgia. Jersey’s on par with everybody now.” Broadus isn’t alone in this realization either. This week alone, Duke associate head coach Jeff Capel, Kansas assistant Norm Roberts and St. John’s assistant Barry “Slice” Rohrssen stopped though St. Patrick’s to see 6-foot-11 2017 forward Nick Richards, a native of Jamaica who has only been playing organized ball for three years. Syracuse coach Jim Boeheim and assistants from Arizona, Indiana and Boston College watched — and were wowed by  — Richards — in recent days, too. Roberts also stopped at Roselle Catholic on his trip through North Jersey. Most of the players, of course, adore the attention. “I love it,” Andre Rafus, a 6-10 forward who transferred from Baltimore St. Frances to Roselle Catholic because of the violence in his hometown, told SNY.tv. “It gives me goose bumps. And honestly I just have to represent Baltimore and show everybody what I can do and what I’m made of.” St. Pat’s, the Elizabeth, N.J., school which has produced NBA players Kyrie Irving, Michael Kidd-Gilchrist, Al Harrington and Samuel Dalembert, isn’t just about Richards, either. The current roster features several players 6-8 or bigger like recent Rhode Island pledge Cyril Langevine as well as Africans Bul Ajang  (offers from Georgia Tech, West Virginia, Washington, Auburn and Pittsburgh) and Buoy Koka, a 7-footer awaiting his first college offer. The size of their front line would make some NBA teams jealous. As for their guard crew, it includes Bryce Aiken, who will soon decide between Seton Hall, Miami and Harvard, along with Jamir Harris, Marcus McClary and Mike Sagay, all of whom have multiple D-1 offers and should add more as time passes. “With this much talent at these three programs and others in the area, Northeast New Jersey is to college basketball coaches what the SEC West has become for NFL scouts,” St. Pat’s coach Chris Chavannes said. “Newark Airport is a mandatory stop for all top programs.” 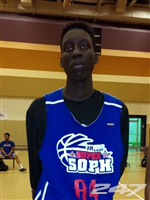 Over at St. Anthony’s — the longtime rival of St. Pat’s when Kevin Boyle coached the Celtics — Hurley’s club has 10 players with D-1 offers, including three African big men who should be piling up more offers in coming months and years: 6-10 Daniel Mading (who holds offers from Florida, UConn and Arizona State, among others), 6-11 Oscar Okeke and 6-9 Akuwovo “Savior” Ogeneyole. Mading and Okeke are members of the Class of 2017, while Ogeneyole is 2018. They join the Georgetown-bound Mosely, 5-foot-11 transfer Asante Gist, 6-7 wing Kaleb Bishop and 6-foot guard Shyquan Gibbs to give the Friars a nucleus of strong talent. The Friars are also expecting Marial Mading, Daniel’s younger brother and a talented point guard, to arrive soon from Australia. “They’ve become a refreshing change here late in coaching,” said Hurley, the coach who has won 27 state titles and is more than 1,000 game over .500 for his career. “The African kids that are here — Oscar, Savior and Daniel — you can’t get them out of the gym. They’ve been amazingly capable of taking any classes. They’re immigrants. This is an opportunity for them. So they’re making some of the other guys look bad and it’s making some of these guys really pay attention to how they’re approaching things. Is everybody on the same page? Absolutely not but I think it’s going to be fun with this group.” At Roselle Catholic, the Lions are re-loading under head coach Dave Boff after winning the New Jersey Tournament of Champions last year when they were led by current Kentucky freshman guard Isaiah Briscoe. 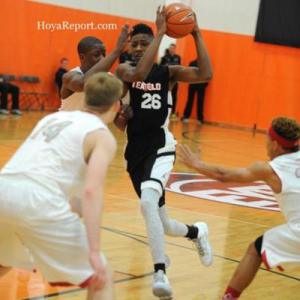 They added several transfers, including the 6-10 Rafus (pictured), 6-3 junior point guard Nate Pierre-Louis and 5-11 junior Leondre Washington to a group that already included 6-11 sophomore big man Naz Reid and 6-4 senior guard Matt Bullock. Louisville coach Rick Pitino and Kansas’ Roberts are just a couple of the coaches who have recently been through the school for studs like Reid and Rafus. “It is almost absurd how many D-1 kids are going to come out of those three schools,” Boff said. “I can’t imagine that there’s another hotbed in the country where within a 15-mile of radius of where you’re going to land you can see over 20 D-1 prospects in three schools.” What makes the situation even more remarkable is that all three schools are in the same state tournament bracket – Non-Public B — which means only one of the three can win the Non-Public B state title and contend for the Tournament of Champions crown. “This also makes the state tournament as anticipated and exciting as it has ever been,” Chavannes said. “People often talk about the old winner-take-all Indiana state tournaments, but there is nothing like the chase for the T of C in New Jersey. “Part of the reason that there are so many top D-1 players in these programs is because kids want to come to places where they can compete against the best players in the country both in practice, in regular season games and then again in the states. Each of these programs and several others owe much of their success to the presence of the other programs in such close proximity that force them to take it to the next level just to compete in conference play, in county tournaments and in state sectional finals. The current state of affairs is great for the players, the programs , the fans and the state .” And, it turns out, college coaches, too. *** Photos: Hoya Report, Shoresportsnetwork.com