At 68, Bob Hurley is Discovering the Internet and Thriving at St. Anthony's | Zagsblog
Follow @adamzagoria

At 68, Bob Hurley is Discovering the Internet and Thriving at St. Anthony’s 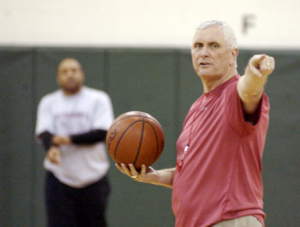 JERSEY CITY, N.J. — It turns out that you can teach an old dog new tricks. Or in this case, a legendary basketball coach. After avoiding the Internet like a plague in recent years, St. Anthony’s coach Bob Hurley now owns an iPad and is familiarizing himself with email, YouTube, Twitter and various news Websites. The continuing Web-education of the Naismith Hall of Famer means that his basketball team could be even more potent in coming years as he expands his (seemingly endless) knowledge of the game and imparts it to his players. And after more than 1,100 wins, 27 state championships and 12 New Jersey Tournament of Champions titles, the 68-year-old Hurley isn’t going anywhere anytime soon. “He has a passion for the game,” St. Anthony senior guard Jagan Mosely, who has committed to Georgetown, said Monday. “Every day he wakes up and thinks about basketball and family. He’s a family man, but he’s also definitely a basketball mind.” That basketball mind is now being expanded via the Internet, which allows him to search topics like the “Princeton Offense” on his iPad and encourage his players to learn from it as well. “It’s probably about two years I’ve been watching film up on YouTube,” Hurley said Monday. “The way I found YouTube was two years ago we went on vacation to Italy and we were staying in Bedonia and we didn’t have the amenities, so the couple my wife [Chris] and I were with said, ‘Why don’t you go look for jazz and [Frank] Sinatra [on YouTube] and see what you come up with?’ So I came up with music at night for after dinner and that was my introduction to YouTube. I did a bunch of things that give us a little mood stuff.” When he’s at home in Jersey City — where he’s coached at St. Anthony since 1972 and was recently installed as school President — Hurley spends most of his time running the tiny Catholic school and fundraising to keep it alive. He says he and Chris — whom he calls his “Chief Volunteer Assistant” — now have more time to devote to St. Anthony because their grandchildren are all in school and they don’t have babysitting chores anymore. After winning four mythical national championships and serving as the subject of a book (“The Miracle of St. Anthony” and a documentary film (“The Street Stops Here”), you might not think there is anything more Hurley can do with, or learn about, basketball. But with his free time, he now pokes around YouTube for still more hoops knowledge. He said he reads the Daily News, the New York Post and ZAGSBLOG every day on his iPad to keep up on the news. He also gets The Star-Ledger delivered. “I bring the iPad to school with me so I do some school stuff,” Hurley said. “I’ll respond to emails at St. Anthony’s. If it’s things relating to the school I’ll spit them out in the offices at school. My little iPad, for the world that I’m in, gets everything done for me.” Both of Hurley’s sons — Rhode Island coach Dan Hurley (8,400 followers) and Arizona State coach Bobby Hurley (32,800 followers) — are well-versed in social media and are active on Twitter, yet Bob Sr. has yet to fully enter the Twitterverse. He says the @BobHurleySr. Twitter account is not his and that he prefers to work through the official St. Anthony Twitter, which has only 800+ followers, as opposed to having his own personal Twitter the way other high-profile high school coaches like Oak Hill’s Steve Smith and DeMatha’s Mike Jones do. “Then they’d have to rely on me though,” he said. St. Anthony assistant Dan Murphy actually runs the St. Anthony Twitter, and is working to beef up its social media presence. Murphy will sometimes post quotes from Hurley on the St. Anthony Twitter.

//platform.twitter.com/widgets.js As he heads into his 43rd season at St. Anthony’s, Hurley is still having plenty of good days coaching basketball. He appears revitalized this year by the addition of three big African players — 6-foot-10 Daniel Mading (who holds offers from Florida, UConn and Arizona State, among others), 6-11 Oscar Okeke and 6-9 Akuwovo “Savior” Ogeneyole. Mading and Okeke are members of the Class of 2017, while Ogeneyole is 2018. They join the Georgetown-bound Mosely, 5-foot-11 transfer Asante Gist, 6-7 wing Kaleb Bishop and 6-foot guard Shyquan Gibbs to give the Friars a nucleus of strong talent. The Friars are also expecting Marial Mading, Daniel’s younger brother and a talented point guard, to arrive soon from Australia. “They’ve become a refreshing change here late in coaching,” Hurley said. “The African kids that are here — Oscar, Savior and Daniel — you can’t get them out of the gym. They’ve been amazingly capable of taking any classes. They’re immigrants. This is an opportunity for them. So they’re making some of the other guys look bad and it’s making some of these guys really pay attention to how they’re approaching things. Is everybody on the same page? Absolutely not but I think it’s going to be fun with this group. “I wouldn’t acknowledge myself as a chef of any kind but there’ s pretty good ingredients here. The phrase that Dwyane Wade talks about all the time is when you get a group of people tighter, you’re trying to develop championship habits. So getting the group together where they can function a little bit as a group and we can work on saying, the potential that’s in the room, we should be trying to develop championship habits because we would have a puncher’s chance against anybody to play right now.” Mosely is especially excited about playing with the new bigs. “We’ve been lacking a lot of big men play my past three years so I think it will bring a lot of energy to the big man spot and just a lot of versatility to the team,” he said. St. Anthony isn’t alone in adding transfers, of course. St. Joe’s-Metuchen picked up Syracuse-bound guard Tyus Battle. Roselle Catholic, the reigning TOC champion and the team that ousted St. Anthony’s from the Non-Public B state championship game last year, added Nate Pierre-Louis, Andre Rafus and Leondre Washington to help offset the loss of Kentucky freshman guard Isaiah Briscoe and South Carolina freshman forward Chris Silva. In New Jersey, St. Patrick’s, St. Benedict’s, Blair Academy and Pope John XXIII have all added (and lost) players, too. Hurley said 18 students transferred out of St. Anthony’s last season and 14 transferred in, including several of the basketball players. “But that wouldn’t be surprising because if there’s 150 boys in school, 50 play basketball,” he said. Armed with a new team and an expanding knowledge of the Internet, Bob Hurley is ready for yet another year at St. Anthony’s. And it doesn’t look like he’s going anywhere anytime soon.