Djokovic Could Face Nadal in US Open Quarterfinals, Federer Enjoys a Great Draw

NEW YORK — Novak Djokovic could meet Rafael Nadal in the quarterfinals of the US Open, while Roger Federer appears to have a clear path to a potential semifinal meeting with Andy Murray. Those were the two biggest takeaways when the men’s draw came out on Thursday. The US Open begins on Monday. Nadal, whose ranking has fallen to No. 8 in the world, was seen as a dangerous floater coming into the draw, and Djokovic wound up with the Spaniard in his quarter. Djokovic, the 2011 US Open champ, is attempting to win his third Grand Slam title of 2015, having already won the Australian Open and Wimbledon, where he beat Federer in four sets in last month’s final.   Nadal, the 2010 and 2013 champion, leads Djokovic 22-10 in their head-to-head series, having met in eight Grand Slam finals, but Djokovic won their last match in the Roland Garros quarterfinals. Nadal will first need to get past talented teenager Borna Coric, who beat him in the 2014 Basel quarterfinals. “I think I would still put Novak there at the top of the list [of favorites],” reigning US Open champ Marin Cilic said Thursday. “He’s had an unbelievable year and at the Grand Slam events it’s a little bit different story than at the other events even though that Andy showed in the last 6-12 months that his tennis has gone so much up and he’s very, very motivated to do well. I think it’s definitely going to be very interesting to see.” In addition to Djokovic/Nadal, the potential quarterfinals include No. 4 Kei Nishikori against No. 7 David Ferrer; No. 3 Murray against No. 5 Stan Wawrinka; and No. 2 Federer against No. 6 Tomas Berdych. If form holds, the semis would pit Djokovic against Nishikori, last year’s surprise runner-up to Cilic, and Federer against Murray. Murray, the 2012 champion, is pitted to meet controversial Australian Nick Kyrgios in his first match. 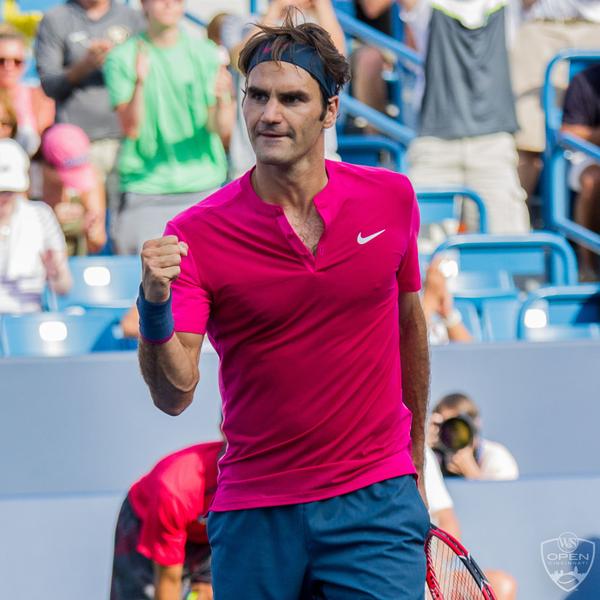 Overall, Federer has to feel confident about his draw going forward since he’s 14-6 all-time against Berdcyh and has won his last five matches against Murray, including in the semifinals of last week’s event in Cincinnati, where Federer beat Murray and Djokovic back-to-back in a best-of-3 sets situation to capture his seventh crown there. “Roger is always going to be a contender here and at any Grand Slam,” Cilic said. “I think especially the way he was playing in Cincinnati, I think it’s great for everybody to see.” “A confident Roger Federer is fun to watch, and that’s what we have at the moment,” ESPN’s Darren Cahill said. Federer, who hasn’t been to the final here since 2009, starts his bid for an 18th Grand Slam championship crown against Leonardo Mayer, who memorably failed to convert five match points against the Swiss in last year’s Shanghai Rolex Masters second round. Federer, a six-time US Open finalist between 2004 and 2009, has a 72-10 match record at the final Grand Slam championship of the year. “The way he played in Cincinnati was just remarkable, to see what he was doing there,” Patrick McEnroe said. “I would be very surprised to not see Federer at least into the semifinals, based on his draw and who’s in his section.” Still, Djokovic remains the favorite in Cahill’s eyes. “He is the man to beat, he’s had an incredible year,” Cahill said. “He for me is the player to beat.”

As She Pursues the Grand Slam, Serena Says She Doesn't 'Have Much at Stake'