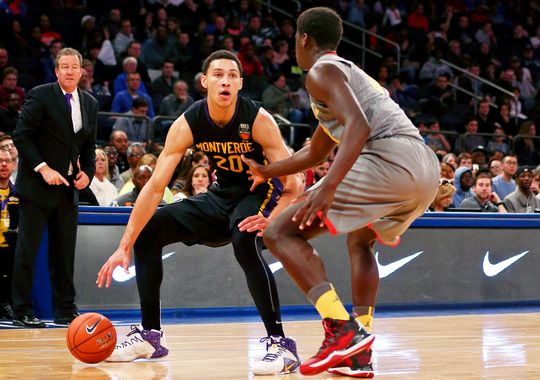 LSU just returned from playing five games in Australia and Ben Simmons did pretty well for himself. The 6-foot-10 Australian point forward averaged 20 points, 9 rebounds, 5.4 assists and 3.6 steals, while also committing 25 turnovers in five games, according to ESPN’s Jeff Goodman. NBA scouts will be watching Simmons and the Tigers in every game this year. “Simmons is clearly going to be the most talked about freshman coming into this college season,” one veteran NBA scout told SNY.tv. “LSU is really building him up. He has great all-around talent. He is the closest thing to demonstrating Magic Johnson-type passing skills along with having the size similar to Magic. He needs to become a more consistent perimeter shooter and learn how to enjoy the game. His approach is almost Kobe Bryant-like which I believe may turn off his teammates at LSU. He goes 1 or 2 in the draft unless he goes back for his sophomore year.” CBSSports.com recently conducted a poll of college coaches in which they were asked, “If you could pick any Division I player and put him on your team for this season, which player would you pick?” Providence’s Kris Dunn came in first with 26 percent, while Simmons was second with 21 percent. “He’s better than [Jahlil] Okafor,” one coach told CBS of Simmons. “He goes into a pick-up game at LSU, doesn’t take a shot, and he won’t lose for seven games.” Better than Okafor? OK, so let’s get those “Tank Slogans” going. How about, “Win Less Than 10 for Ben” or “Don’t Win 10 for Ben.” Josh Newman adds, “Less Zen for Ben.” Multiple mock drafts have Simmons projected at No. 1 in 2016, while DraftExpress.com has Simmons at No. 2 behind Kentucky freshman big man Skal Labissiere. Dunn is projected at No. 8, while four of the top seven will be playing in the SEC in Labissiere, Simmons, No. 6 Jamal Murray (Kentucky) and No. 7 Malik Newman (Mississippi State). As for Kentucky, Simmons’ brother told USA Today that Ben would “love nothing more than to go into Kentucky and beat them.” The NBA scout, meantime, isn’t the only one who has compared the left-handed Simmons to the great Magic Johnson. “You don’t want to put the whammy on him by comparing him to Magic Johnson and LeBron and Tracy McGrady, but he’s going to be a positionless star,” ESPN’s Fran Fraschilla told USA Today. “You’re going to be able to put him on the court anywhere essentially at LSU, and he’s going to be successful. He is a quintessential point forward. He’s going to be Johnny Jones’ coach on the floor. He’s a marvelous talent, excellent athlete, great basketball instincts. “It would be absolutely stunning to me, barring injury, if he’s not the No. 1 pick in 2016.”