The Ultimate Goal: Getting James Zagoria Into the 2028 Olympics | Zagsblog
Follow @adamzagoria

The Ultimate Goal: Getting James Zagoria Into the 2028 Olympics 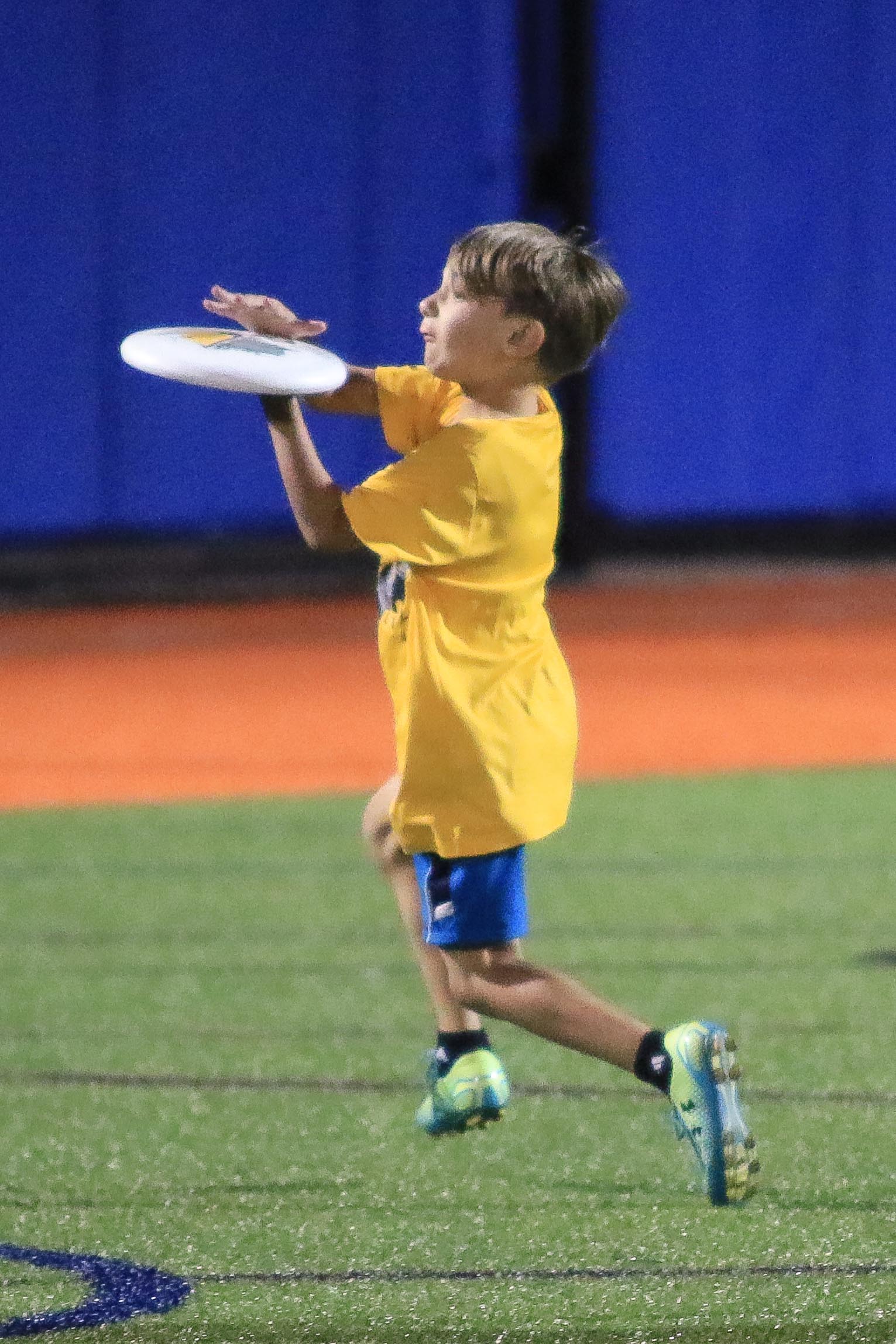 NEW YORK — This was one day recently after Ultimate Frisbee had been officially recognized by the International Olympic Committee and I was driving with my son James to a summer league Ultimate game at SUNY Purchase. We had developed a nice little summer routine where the two of us swam in our friend’s pool for a few hours, then stopped by the Capricchio II restaurant in Croton-on-Hudson, N.Y., for a quick plate of penne and chicken before the 7 p.m. start of the game. (James did most of the eating, I drank water and nibbled a few bites of chicken.) Soon we were at the fields, tossing the disc in warmups up with the Gold team and James was excitedly throwing his forehand with my teammate Matt Tracy and our friend Arnold Sanchez. For a 7-year-old, he’s got a pretty mean forehand that he can throw with accuracy up to about 20 yards.  (His backhand is still a work in progress.) Anyway, once the game began two things became clear. No. 1 was that we didn’t have all of our best players and in fact only had five of the 13 men on our roster. And No. 2 (largely because of No. 1) we were probably going to lose to a pretty strong Purple team. So at a certain point in the first half, I decided as captain that it couldn’t hurt to put James into the game (even if strictly speaking he wasn’t on the roster or covered by the league’s insurance policy). He was on the sideline wearing an extra Gold jersey that we had and was champing at the bit to get into the game, even if he admitted to being “scared.” He had even put on size four cleats that we had borrowed from friends, so he was ready to go. I told the opposing captain that James might play and then informed my team. Then on an offensive point when we were already down a few points, I called him into the game. His little face lit up and he stood with me and the other five players on the line as we called out our offensive set. Basically I told him to run deep and look to catch a goal. Sure enough I got the disc on the ensuing offensive play and saw him streaking into the corner for a long backhand. I let it fly about 30-40 yards and watched with everyone else as he streaked toward the disc. I think his defender may have laid off a bit, but whatever the case, James ran it down and caught a goal, pancake-style with two hands, for his first ever “official” goal in an Ultimate game. “I like catching goals a lot,” he told me with a big smile. A wave of pride came over me and everyone on the field seemed genuinely happy for him. 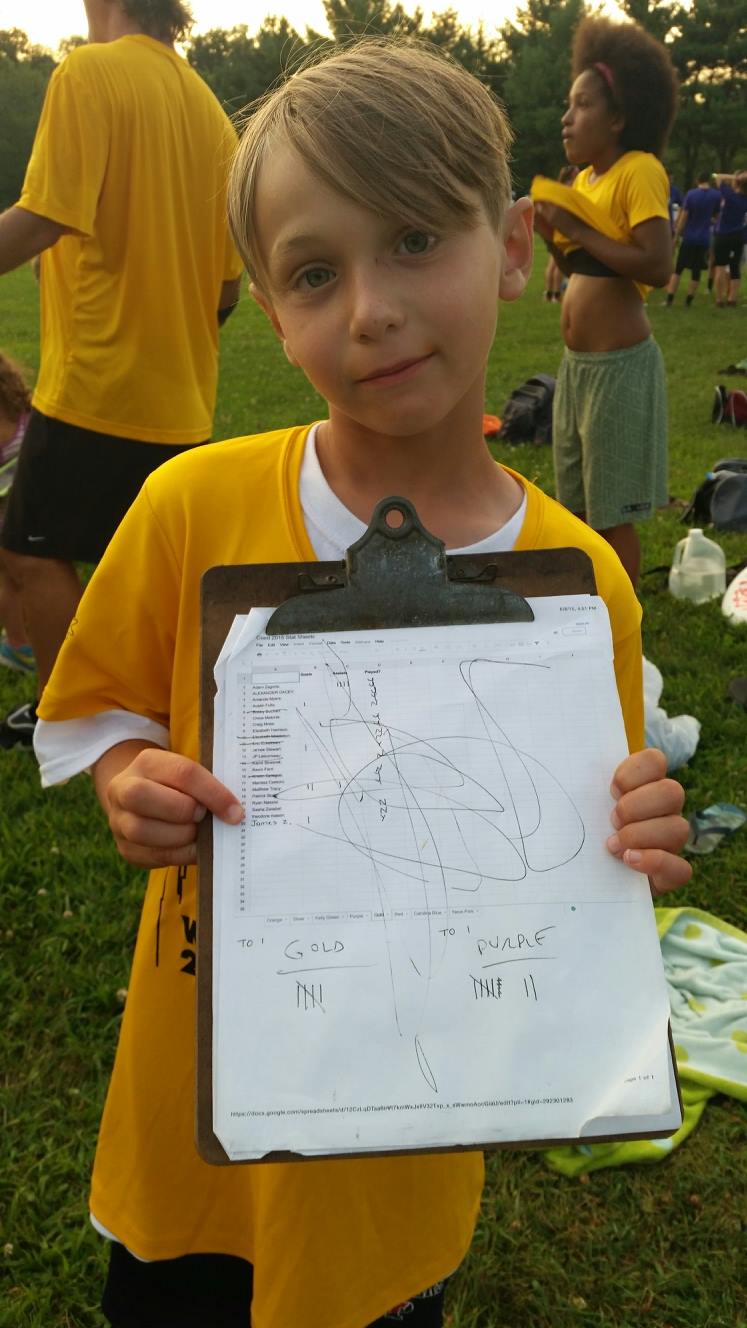 Soon enough, my teammate Liz Middleton snapped a picture of James holding up the stat sheet which she had registered with his first-ever summer league goal. James played a few more points in the game and nearly caught a second goal from Daddy, but the forehand I threw him was a little high (up near his head) and he couldn’t quite hold on. I’m sure the other team thought it was a little weird that this 7-year-old kid was playing in the game, but everyone handled it pretty well and nobody said anything to me. In fact, Matt “Pippin” Auletta of the Purple team “covered” James on defense several times and was very supportive and encouraging, telling him where to cut on offense and how to position himself on defense, all of which is in keeping with Ultimate’s “Spirit of the Game,” which relies upon “a spirit of sportsmanship which places the responsibility for fair play on the player.” After the game, James admitted that he now had a more positive view of Pippin, a very talented pro player whom James had previously been scared of because of some of his less-than-Spirited moments on the field. We ended up losing 15-7 but I left the game with a tremendous sense of pride, feeling that my son had enjoyed himself while acquitting himself pretty well in a game against adults. A couple of my teammates and I later joked that James had done more positive things for our team than at least a couple of the other Gold players. In a broader sense, the night caused me to reflect a little bit. I have been playing in the Westchester Summer League since the summer of 1988, long before some of the current players were even born. That first summer, I was painting houses with my high school buddies, spending each night after work unwinding by drinking beers at my friend Jon Fair’s house as we all listened to Appetite for Destruction by Guns N’ Roses. My first year in the league, I was a 19-year-old college sophomore coming off my first year playing competitive Ultimate at Wesleyan University. I joined the team in the spring of ’88 with my best friend in college, Mike Scully, and soon we were part of a team that qualified for UPA College Nationals in Santa Barbara. That was a good time. We traveled with about 25 guys and I couldn’t believe college kids lived in stilted houses on the beach at Santa Barbara. Anyway, by that summer I was fully hooked on Ultimate and showed up at the Westchester Summer League. That was long before I got married, had kids and turned into some form of “adult.” (I’m still working on that one.) It was long before I co-wrote a book on the history of Ultimate, played in various National and World Championships or watched as not one, but two, professional Ultimate leagues emerged. I’ve played in the league every year since 1988 sans one — 27 years and counting. 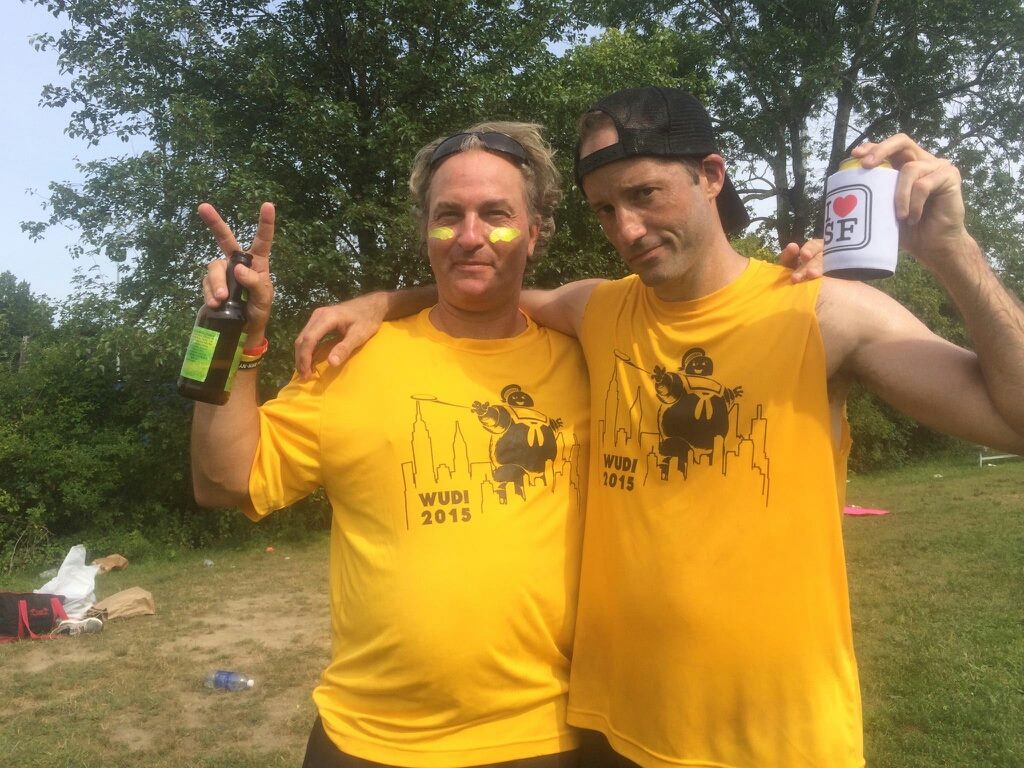 But summer league is about more than competition to me. It’s about spending summer nights with friends like Matt Tracy and Eric Eckelman, enjoying camaraderie and cookouts and, mostly, the beauty of Ultimate on a summer night. “When a ball dreams, it dreams it’s a Frisbee,” goes the old phrase. Anyway, on this night that James played I had come full circle in a way. Here I was playing Ultimate in my favorite environment alongside my 7-year-old son, who was doing it pretty well. A few nights later, there was an All-Star Game under the lights and on the turf at SUNY Purchase for all the captains, MVPS and Spirit winners. I asked the league’s coordinator, Seth Canetti, if James might be able to play in the game for a bit and Seth graciously said yes. 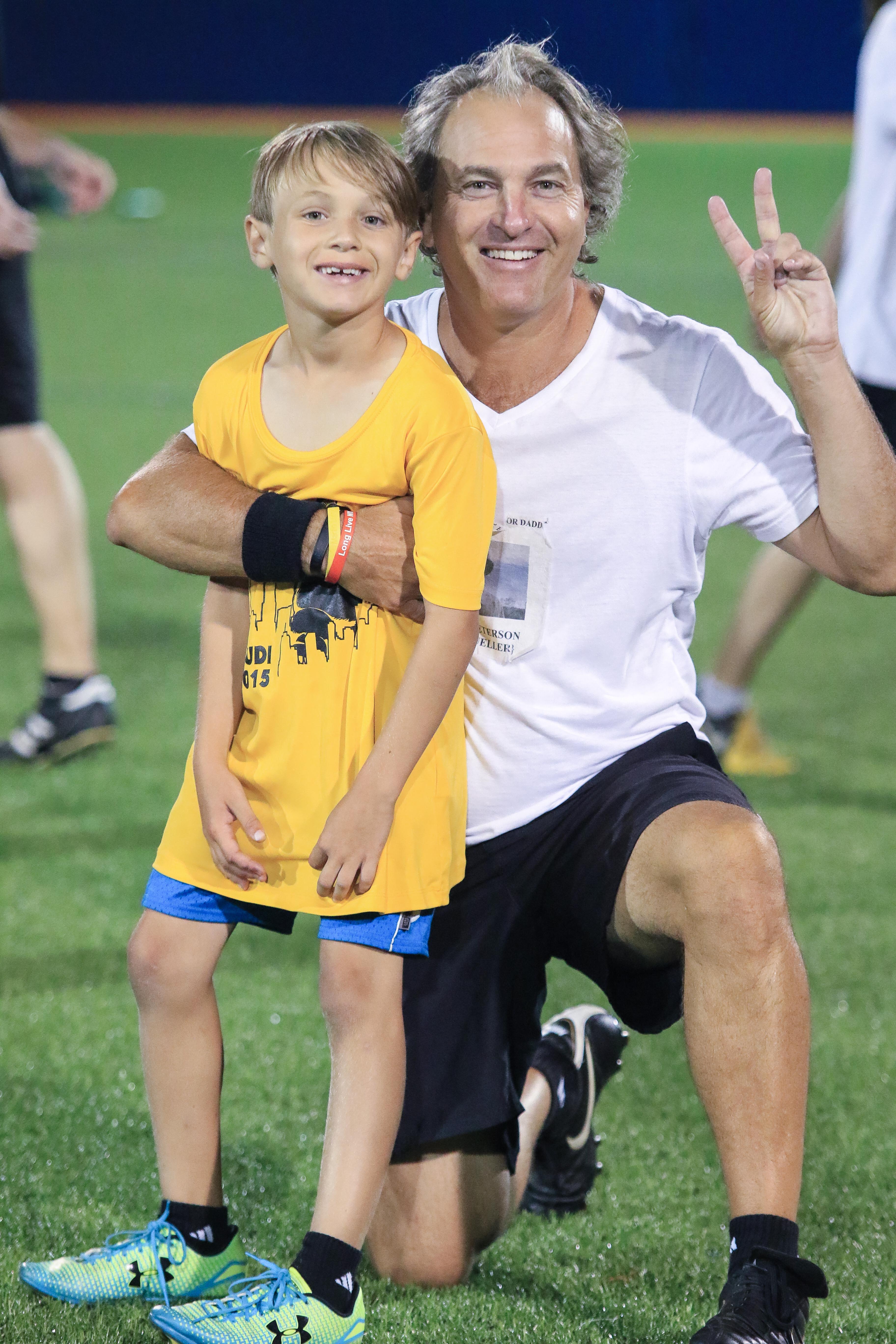 Celebrating with James after his catch in the Showcase game at SUNY Purchase on Wednesday, August 5, 2015. © 2014 Sandy Canetti for UltiPhotos. All Rights Reserved.

The night of the All-Star Game, we lost our last regular-season game to fall to 5-12 on the regular season. James didn’t play in that game because we had more than enough guys, but he was really amped up for the All-Star Game. When the time came for the game, we both went in on an offensive point and again he caught a goal, this time on a shorter pass from a woman. Sandy Canetti, Seth’s father and a professional Ultimate photographer, caught the goal on film — and also snapped this gem of me and James celebrating afterwards. James and I played a few more points on offense (although probably not enough for his competitive spirit), including one where he nearly got run over by our All-Star captain John “Shockey” Palmer, who runs about 6-foot-4 and didn’t see James cutting under his legs. I’m pretty sure our team won the game, but whatever the case, James and I celebrated afterward with a couple of hamburgers at the cookout. Once again, I left feeling great pride and he seemed genuinely pleased that he had played. 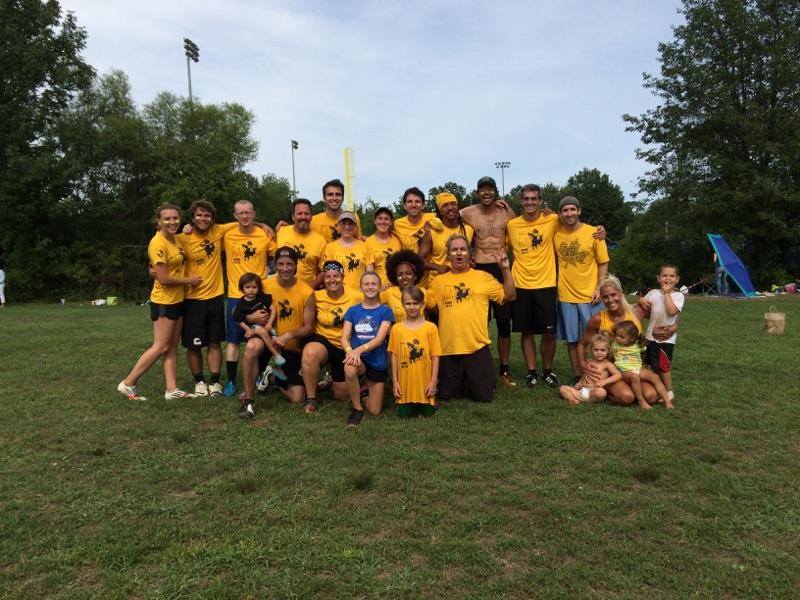 Last Saturday, the Gold team made an impressive run to the summer league finals despite being the No. 7 seed out of eight teams. We took out the No. 2 seed Silver in the quarterfinals, 15-6, and then beat No. 6 Orange, 15-8 in the semis. The final was a tough match against Shockey and top-seeded Red, and we came up on the losing end, 15-12, but everyone enjoyed a terrific day in which we surprised a few teams — and maybe even ourselves a bit. James didn’t play in the playoffs, but he and his sister and mother were there to root on the Gold team and pose for this photo after the final. *** Throughout most of my life, I’ve had to explain to people what Ultimate — my great sporting passion alongside tennis — was all about. “It’s a 7-player team sport that combines elements of football, basketball and soccer and requires athleticism, field sense and disc skills,” I would say in a frustrated yet patient tone. Now, I don’t even bother when people — including many Division 1 college basketball coaches who should know better — ask. I simply tell them that the College Championships are on ESPNU and that the pro Ultimate highlights are featured on SportsCenter at least once or twice a week during Ultimate season. In fact, it’s been the No. 1 player on SportsCenter. (And no, Michael Wilbon, this play wasn’t scripted. It’s as athletic as any you’ll find in sport.) You should know what it is by now. If not, you’re some kind of sports idiot. Karl-Anthony Towns, the No. 1 pick in the NBA Draft, played Ultimate in high school and at Kentucky along with his basketball teammates, and the NCAA runner-up Wisconsin basketball team also trained using Ultimate. My old friend Robert “Nob” Rauch, head of the World Flying Disc Federation (WFDF), believes we could have Ultimate in the Olympics within the next decade. “It’s fun to watch a Frisbee sail through the air,” Rauch told the New Yorker in this excellent piece. “You see it bouncing off the wind, you see a good thrower use that wind to curve it in at the right place. Our hope is that we’ll be in a position, in 2017, to make a credible pitch to put forward the mixed gender division of Ultimate as a viable candidate for the 2024 Olympics.” I’ll be way too old by then, but James will be 16. He’ll be 20 by the 2028 Olympic games. And he’s already getting ready.   **Across an Ultimate career that has lasted almost 30 years, Adam Zagoria has competed in College, Open, Mixed, Masters and Grandmasters Nationals. In 2013, he captained the Westchester Ultimate Summer League championship Gold team. His team also won the WSL title in 2011. Zagoria is the co-author, along with Tony Leonardo, of “ULTIMATE – The First Four Decades.”