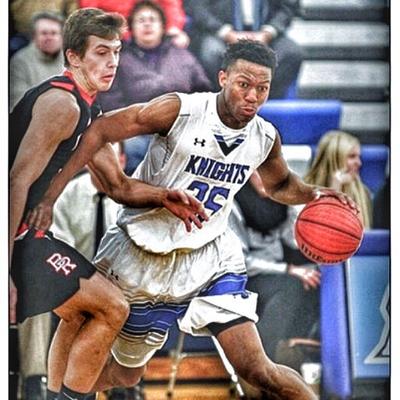 After returning from his official visit to Michigan Saturday night, Tyus Battle was all set to commit. His father told him to sleep on it, and when he woke up on Sunday Battle still felt the same way. So on Monday he Tweeted out his decision and the result is that Michigan is getting the No. 4 shooting guard in the Class of 2016 according to 247Sports.com. The Wolverines beat out a Who’s Who of other big-time programs for the 6-foot-6, 200-pound Battle, including Duke, Syracuse, Kentucky, Louisville and Ohio State. “I just felt comfortable and I really enjoyed the school when I was out there,” Battle told SNY.tv by phone on Monday. “The mixture they have of academics and athletics, you don’t find many places. I just felt really comfortable at the school and I loved the school.” Battle, out of Gladstone (N.J.) Gill St. Bernard’s, also likes what Coach John Beilein has done in terms of developing players and feels he can help Battle get to the NBA. (The picture at left is of Battle calling Beilein to inform him of his commitment.)

“You can see they have a track record of developing the guys, such as Caris LeVert, Nik Stauskus and [Tim] Hardaway [Jr.] so that was a key thing for me,” Battle said. Beilein told Battle he would play him “kind of in Caris LeVert’s role.” LeVert returns for the 2015-16 season but will be gone to the NBA when Battle arrives. New York recruiting expert Tom Konchalski said Battle is the “quintessential John Beilein player because he can shoot the ball.” “He’s a  big guard, he has skill, he has athleticism,” Konchalski said. “The only thing he has to do is get stronger. He’s terrific shooter, he’s tailor made for their system. He’s a major get for them, to beat out the people who they did beat out. John Beilein’s one of the best coaches in the country and he’ll really develop under John Beilein.” Battle said he considered several other schools, including Duke, which many had thought he would pick. “I really liked the visit when I went out to Duke,” he said. “It’s a great place, great staff, great academics there, but I just felt really comfortable at Michigan.” Battle is still recovering from a foot injury that sidelined him for the end of the 2014-15 season and said he hopes to get back on the AAU circuit this summer. “I’m trying to get back as soon as possible,” he said. As far as his senior year, Battle plans to stay at Gill St. Bernard’s and “win as many games as possible,” he said. “Go to the TOC [Tournament of Champions] and just try to compete and have fun,” he said.   For previous updates on Battle, click HERE. **For more on Tyus Battle, watch our SNY.tv documentary “The Battle Plan” here.