Cheick Diallo Wins MVP in Losing Cause at Jordan Classic, Kentucky Signees Recruiting Him to Lexington 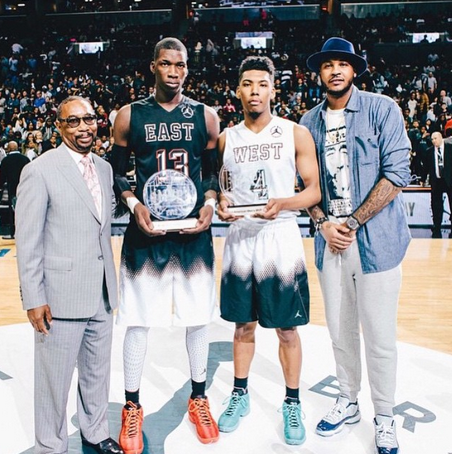 NEW YORK — It’s been quite an exciting few weeks for Cheick Diallo. The 6-foot-9 forward from Centereach (N.Y.) Our Savior New American won MVP honors last month at the McDonald’s All-American Game in Chicago. Just last week he helped the World Team win the Nike Hoop Summit in Portland, Ore. And on Friday night, Diallo put on a show in front of Michael Jordan, Carmelo Anthony, Victor Oladipo, Victor Cruz, Worldwide Wes, more than 300 fans from his high school and a capacity crowd in the Jordan Brand Classic at Barclays Center. Diallo went for 26 points on 12-for-16 shooting and 11 rebounds in a losing effort as the West beat the East, 118-116. Arizona-bound guard Allonzo Trier poured in 28 points on 11-for-16 shooting for the West.

“There were a lot of fans here,” said the Mali native who began playing basketball in 2011 after growing up playing soccer. “I am just so excited to be in New York. That’s my state, that’s where I live, so I’m so excited.” Diallo’s play excited the NBA personnel on hand, which included Knicks GM Steve Mills. “He’s a high-energy guy,” one NBA scout told SNY.tv of Diallo. “Great athlete. Does the dirty work. Rebounds and blocks shots. Runs the floor for easy baskets. Knows his role.” In the coming days or weeks, Diallo will make a college decision, too. He is down to St. John’s, Kentucky, Kansas, Iowa State and Pittsburgh. On Saturday, he will meet with new St. John’s coach Chris Mullin, associate head coach Barry “Slice” Rohrssen and assistant Matt Abdelmassih. He also met late Friday night with Kansas coach Bill Self according to Evan Daniels of Scout.com and will meet soon with Kentucky coach John Calipari. “Nobody knows where I go to college,” Diallo said. Diallo did not want to field recruiting questions, but the three Kentucky signees on the East team all said they would love to have him come to Lexington. Skal Labissiere, the projected No. 1 pick in the 2016 NBA Draft, was roommates with Diallo at the Nike Hoop Summit and speaks French with him. “Cheick was my roommate at the Nike Hoop Summit and I’ve been hanging out with him a lot this week, so we talk about it,” Labissiere, who went for 11 points and 12 rebounds in the loss, told SNY.tv. “I don’t know what they are going to do.” What’s Labissiere’s message to Diallo? “He can help us and the way he plays, he’s going to play right away because he has so much energy when he plays, so he can help us right away,” Labissiere said. English is not Diallo’s first language, and he appreciates speaking French with Labissiere. “I’ve known Skal a long time,” he said. “It’s not even now. Ever since I came here [from Mali] I know Skal. Nike Hoop Summit, was the same roommate so we always talking French.” Isaiah Briscoe, who nearly brought the East to the win en route to 22 points, 6 rebounds and 6 assists, doesn’t speak French, but would love to have Diallo join him at Kentucky. “I would like for Cheick to come to Kentucky, I mean that would be good,” Briscoe said. “Skal, Cheick, me, Charles [Matthews] I think that’s a good class.” Will he work on his French a little? “Not happening,” Briscoe joked. He added: “I’m not the recruiting type, I might add one or two little, ‘Yo, you really should come to Kentucky.’ I’m just out here just having fun, just enjoying my time out here.” Matthews, who went for 6 points and 4 assists in the loss, also said he’d love to play with Diallo but is not actively recruiting him. “Man, he’ll be a big help a lot,” Matthews said of Diallo. “I really love him. He plays super hard. He’s very selfless so I would love to have a player like him. “I’ve been trying to [recruit him] but that’s not really how I recruit players because I don’t want to keep harassing them, saying, ‘Come to Kentucky, come to Kentucky.’ It will be more based off spending time with him, getting to know him as a person, just building that bond with him because at the end of the day that’s what they’re going to want to play with. They’re not going to want to play with us because they think we’re just like annoying people.” FREE THROWS Jaylen Brown, Luke Kennard and Henry Ellenson all sat out for the East with injuries.   Photo: Andrew Slater/ 247 Sports Follow Adam Zagoria on Twitter And Like Zags on Facebook