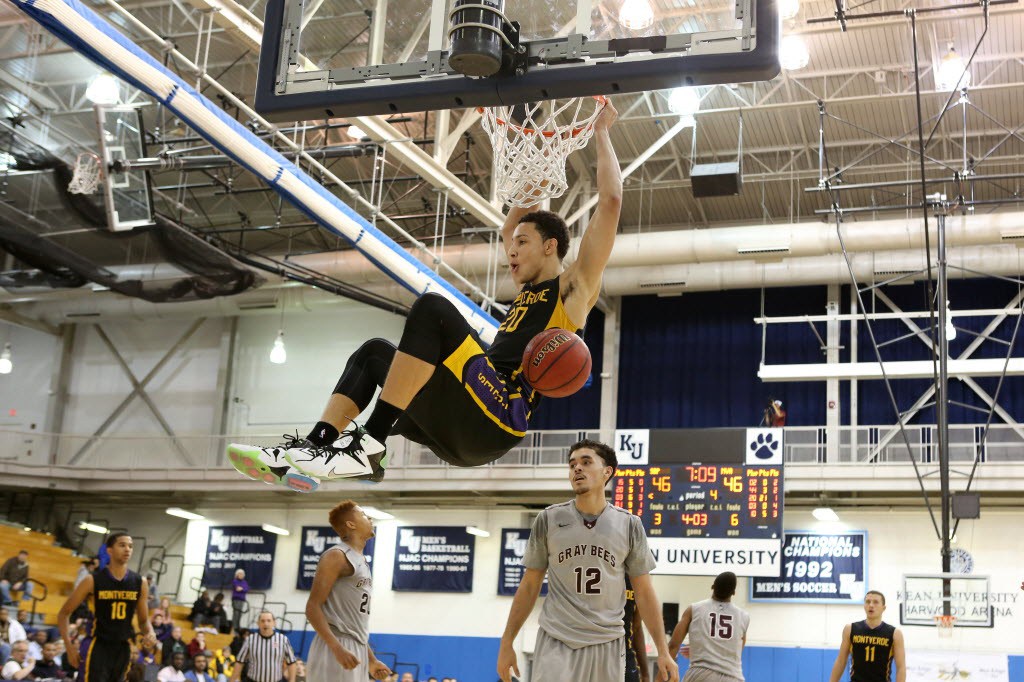 If there were no one-and-done rule in the NBA, LSU-bound forward Ben Simmons would be a lottery pick in this year’s NBA Draft, multiple experts told SNY.tv. “Oh, he’d go in the Top 10, top eight [in 2015],” one veteran NBA scout who attended the McDonald’s All-American Game scrimmage on Tuesday told SNY.tv. Asked how many of the 24 McDonald’s All-Americans could go straight to the NBA now, the scout added, “He would be the only one that I could see for sure.” The 6-foot-10 LSU-bound Australian forward will have several chances to showcase his skills to the nation in the coming days. The McDonald’s All-American Game airs Wednesday night at 9 p.m. on ESPN, and then Simmons will fly to New York early Thursday morning to meet his Montverde (FL) Academy teammates for the Dick’s Sporting Goods High School Nationals. Montverde plays its first game on Thursday at 4 p.m. at Christ the King. The tournament airs on ESPNU. “He’s scary, man, he really is,” the NBA scout said of Simmons. “He doesn’t shoot it great, he probably doesn’t even have a true position right now. But he is so athletic, and the game just comes so easy to him, you can just tell.” Simmons, who committed to LSU as a junior in part because LSU assistant David Patrick is his Godfather, has already won the Naismith, Gatorade and Morgan Wootten National Player of the Year awards. He is averaging 29 points, 12 rebounds and 4.4 assists a game this season. “He’s winning just about every National Player of the Year so he’s a terrific player,” Montverde coach Kevin Boyle told SNY.tv on The Four Quarters Podcast. “He’s terrric, multi-skilled, makes other people better and I think there’s no question that if he came out this year he would be a lottery pick and probably very high. There’s a lot of mock drafts that have him projected No. 1 or 2 in the following draft.” Boyle knows a thing or two about top draft picks, having coached players picked No. 1 (Kyrie Irving), No. 2 (Michael Kidd-Gilchrist) and No. 3 (Joel Embiid), as well as projected Top-5 pick D’Angelo Russell. “I do projecte and anticipate [Simmons] to be one year and done because of his ability to pass and handle the ball for a guy his size,” Boyle said. “I think most people think he’s going to have a pro career…There’s no question that Ben Simmons is right there with those guys or ahead.” DraftExpress.com has Simmons projected as the No. 2 pick in 2016 behind uncommitted wing Jaylen Brown of Marietta (GA) Wheeler. “I have no idea where [Simmons] would go in this draft, honestly,” Jonathan Givony of DraftExpress.com told SNY.tv. It doesn’t really matter since Simmons will spend at least one year at LSU before going pro. “It just depends on how the season goes,” Simmons told ESPNU in November. “If I’m ready to go to the next level then definitely I’ll look at my options. But I’m focusing on this season right now. We have my last high school season [at Montverde Academy] so I really just want to do as well as I can for the team and my coaches here.” That season will wrap up this weekend as Montverde shoots for its third straight Dick’s Nationals title. After that, Simmons will play for the World Team in the Nike Hoop Summit on April 11 and in the Jordan Brand Classic April 17. He and fellow LSU commit Antonio Blakeney are spending their time now trying to recruit Malik Newman to come with them to LSU. Newman is also mulling Kentucky, N.C. State, Mississippi State, Ole Miss and Kansas. “LSU is trying, Blakeney and Simmons are trying to corral [Newman] there as well,” the NBA scout said. Whatever happens with Newman, NBA teams may soon be tanking to get Simmons the way some (cough, the Knicks and Sixers, cough) look to be tanking this year for Jahlil Okafor and Karl Towns. So get your tanking slogans ready. Here’s a couple to start, courtesy of our own Josh Newman: “Win Less Than 10 for Ben” and “Play Without Zen for Ben.” Photo: AP Follow Adam Zagoria on Twitter And Like Zags on Facebook

Ivan Rabb Down to Two, Not Ready to Commit Just Yet (UPDATED)