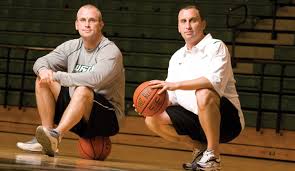 SYRACUSE — The Hurleys are heating up as the coaching carousel turns. Brothers Bobby and Danny Hurley are in play for several high-profile positions and will have some tough choices to make in the coming days and weeks. With Steve Lavin out at St. John’s, sources told SNY.tv that Danny and former St. John’s legend Chris Mullin will be the top two targets for the now-vacant Big East job, with Minnesota’s Richard Pitino, Manhattan’s Steve Masiello and Iona’s Tim Cluess also on the radar. Bobby Hurley is not in the mix at St. John’s at the moment. The younger Hurley currently makes $700,000 – $800,000 at Rhode Island, which he guided to a 23-9 mark and an NIT appearance this season. He would stand to make significantly more than that at St. John’s. Still, Rhode Island could be the preseason favorite in the Atlantic-10 next season with the return of NBA prospect E.C. Matthews and junior forward Hassan Martin, as well as the potential addition of Memphis transfer Kuran Iverson, who is seeking a waiver to play immediately. Meantime, as previously reported here, Bobby Hurley will interview Saturday at DePaul, and is thought to be among the leading candidates for that job along with Valparaiso’s Bryce Drew. Former DePaul coach Oliver Purnell made over $2 million, sources said. That at least raises the theoretical possibility that both Hurley brothers could be coaching in the Big East next season, with Bobby in Chicago and Danny in New York. Bobby has also had preliminary conversations about the Arizona State opening, which opened when Herb Sendek was fired this week. Buffalo’s boosters this week helped Bobby to get a raise where he would become the highest-paid coach in the Mid-American Conference – surpassing Ohio’s Saul Phillips, who makes $550,000 annually. Still, Hurley has yet to sign the deal and will continue to examine his options, with some tough choices ahead. “It’s nice that people acknowledge what you’re doing,” Bobby told me recently for this story. “I think Dan and I both took over programs that didn’t have a ton of tradition, and in Rhode Island’s case it was in really bad shape when he took over and he’s brought them to a 13-win conference record. And in my case this program before I got here was 0-for-14 in chances to go to the NCAA tournament and we’re in a position where we’re two games away so it’s nice that people acknowledge what we’re doing but I think we both have a lot of really good young players and there’s a lot of positives surrounding both our programs from both our fan bases.” Photo: SILive.com