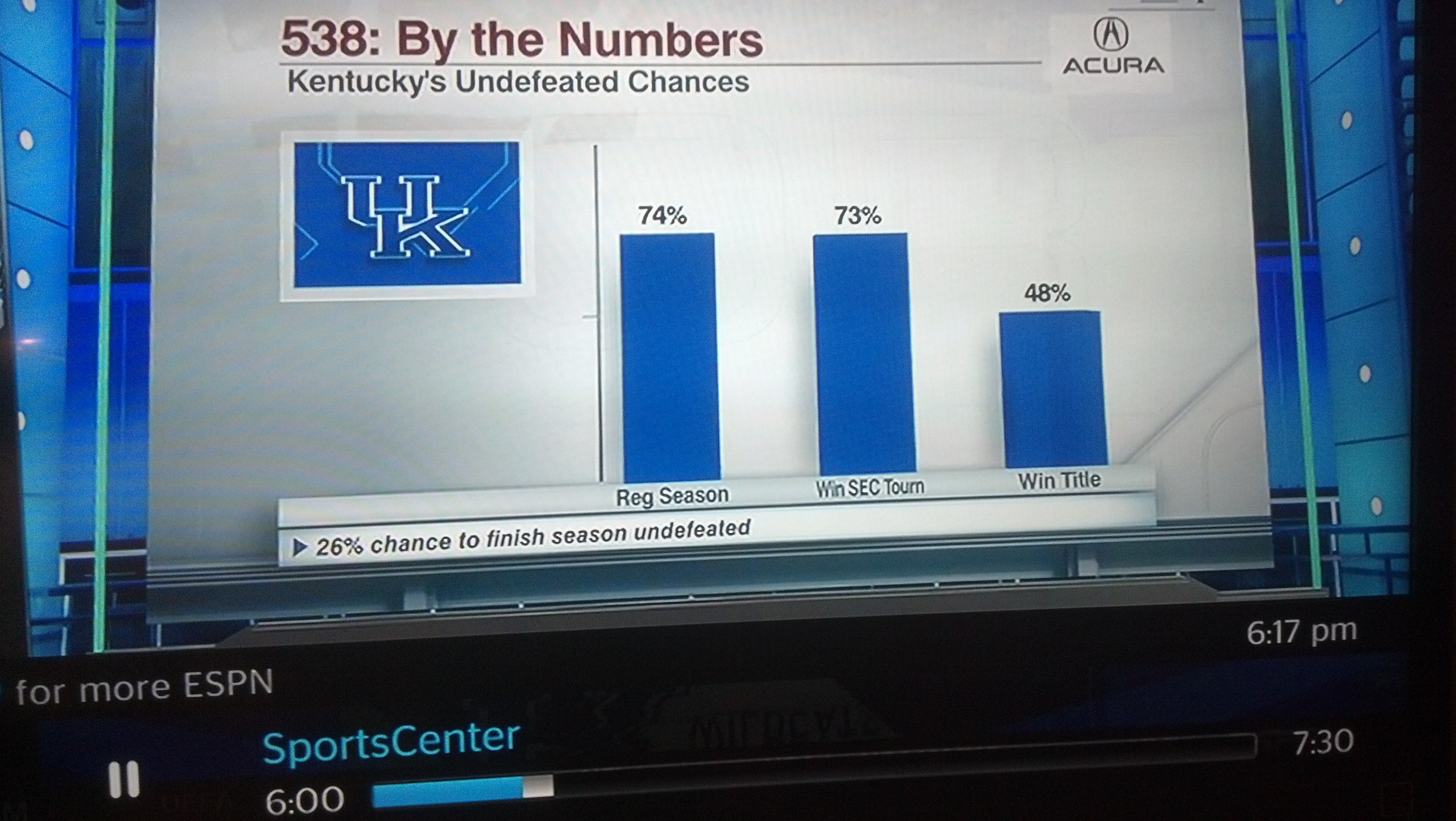 According to FiveThirtyEight.com, Kentucky has a 48 percent chance to win the NCAA Tournament and only a 26 percent chance to finish the season undefeated. The No. 1 Wildcats are now 28-0 after Wednesday night’s 74-56 destruction of Mississippi State. Freshman forward Trey Lyles went for 18 points, 6 rebounds, 2 assists, 1 steal and 1 block in the win. “I thought Trey Lyles was outstanding,” Kentucky coach John Calipari said on the SEC Network. “Trey Lyles is the X-factor, he’s been sick. He is good as any player in the country, but he’s going to have to fight and you gotta dominate when you can.” From FiveThirtyEight on the probability of going undefeated:

Our ESPN colleague Alok Pattani ran the numbers earlier this month, right after LSU almost ended the Wildcats’ undefeated run. He came up with a 24 percent chance that Kentucky would go 40-0. We’ve updated his calculation, with a couple of changes. We used ratings from Ken Pomeroy instead of ESPN’s Basketball Power Index to run 10,000 simulations of the rest of Kentucky’s regular season, the SEC tournament and the NCAA tournament. And instead of using just our ESPN colleague Joe Lunardi’s bracket prediction, we used the consensus bracket according to Bracket Matrix. Considering these changes and that the Wildcats have played three games since then, the results are remarkably consistent. We give Kentucky a 74 percent chance of winning all four of its remaining regular-season games, a 73 percent chance of winning the SEC tournament and a 48 percent chance of winning the NCAA title. That’s very high for a 68-team, single-elimination tournament; no team had above a 15 percent chance of winning last year’s tournament when it began, according to FiveThirtyEight’s model, which is more sophisticated than the one we’re using here. Put this all together, and we give Kentucky a 26 percent chance of going 40-0 — which is consistent with Pattani’s calculation of 24 percent, three easy games ago.

Do you think Kentucky will go undefeated through the NCAA Tournament? Gun to my head, I say they probably pull it off. Cast your vote here.