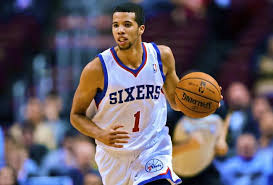 Syracuse coach Jim Boeheim killed the Philadelphia 76ers for dealing former Orange point guard Michael Carter-Williams to the Milwaukee Bucks, a deal that will unite Carter-Williams with another former Syracuse point guard in Tyler Ennis. “I have no idea what they’re doing,” Boeheim said of the tanking 76ers last night on TK99, according to Syracuse.com. “It’s hard to know what they’re doing down there. It’s hard to figure that out.” He added: “They have to feel that [Carter-Williams] is not the answer for them. I’m sure that’s what their thought process is. I guess, more or less, they just gave up on him being a point guard for their team. … Unless you have a top three or four draft pick, there aren’t that many players who can help your team right away. That’s really the problem in the NBA.” Carter-Williams, the reigning NBA Rookie of the Year, has struggled from long range this season. He has the second-worst 3-point percentage among those who have taken at least 100 3s (25.6 percent) and the third-lowest effective field goal percentage of anyone taking at least 10 shots per game. “I can’t lie I’m shocked,” Carter-Williams Tweeted. “I love this city thank you for everything. I can honestly say I gave it my all. I wish Philly nothing but the best.” The Bucks also added Ennis and former Phoenix Suns big man Miles Plumlee in the three-team trade. “We’re thrilled to add three talented young players in Michael, Tyler and Miles to our team,” Bucks general manager John Hammond said in a statement. “[Coach Jason Kidd] and his staff have an excellent track record of developing young talent, and we think this trade will accelerate our team’s growth as we continue to build toward the future and our goal to put a championship-caliber team on the floor.” Ennis wasn’t getting much run in Phoenix behind point guards Goran Tragic, Isaiah Thomas and Eric Bledsoe. On Thursday, the Suns dealt Dragic to the Miami Heat after several other teams, including the Knicks, were reportedly in the mix to land the point guard. Thomas, meantime, was traded to the Boston Celtics, leaving Bledsoe alone in Phoenix. “When Tyler was in here, Phoenix had actually told him they weren’t going to trade him,” Boeheim said. “That’s how crazy the NBA is. They told him when he came in here that they were going to move Dragic or Isaiah and keep him. All of a sudden he was included in the trade. They had four point guards. Now they have one. Bledsoe is a little bit of one, more of a 2. They trade Dragic and Thomas and Tyler. I can’t figure that one. … I don’t get it. They liked him. They liked how he was playing. Then he’s gone.” Ennis wrote on Twitter: “I want to thank the City of Phoenix and the Suns Organization for drafting me. Wish I could have been a part of getting into the playoffs.” He added: “I’m also really excited to get to Milwaukee and continue the playoff push. Can’t wait to learn from one of the greatest PGs of all time.” Still, Boeheim seemed pleased that both of his former point guards were headed to play for Kidd. “They’re going to a team that has one of the great point guards of all-time as a coach,” Boeheim said. “Jason knows how to play the point the NBA. I’m sure he’ll be a great help.”