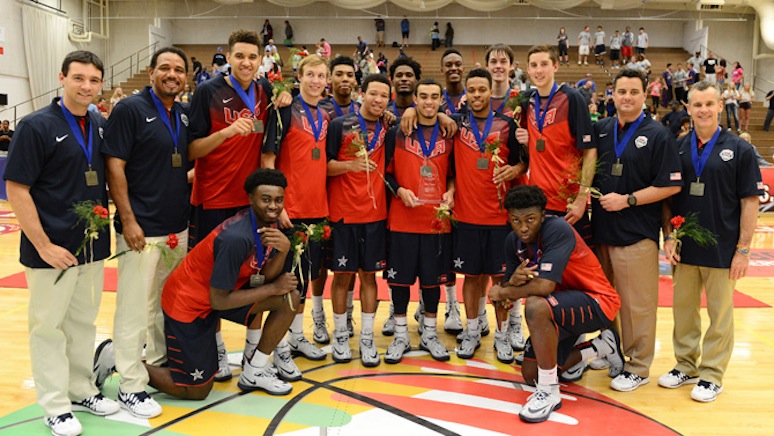 Future Duke, Kentucky and Arizona players are among those looking forward to playing for what could be a loaded USA U19 National Team this summer in the 2015 FIBA U19 World Championship. The event will be held June 27-July 5 in Crete, Greece. Kentucky-bound point guard Isaiah Briscoe, the future Duke duo of Chase Jeter and Luke Kennard and Arizona signee Allonzo Trier all told SNY.tv they are looking forward to trying out — and hopefully making — the team. All four played last summer on the U18 National Team that won gold at the 2014 FIBA Americas Championship under the direction of Florida coach Billy Donovan. USA Basketball is also targeting Villanova-bound point guard Jalen Brunson and uncommitted stars Jaylen Brown, Stephen Zimmerman, Malik Newman, Diamond Stone, Ivan Rabb and Caleb Swanigan for the U19 team. All have USA Basketball experience. Official invitations will go out later this spring. “I’m looking forward to getting back to Colorado Springs, training and representing my country,” Briscoe told SNY.tv. “And then go to Greece.” Jeter, Trier, Zimmerman and Kennard’s father all expressed similar sentiments. “Yessir,” the 6-11 Jeter told SNY.tv when asked if he planned to play this summer. The father of the 6-5 Kennard also said Luke planned to compete. “Yes, if he gets invited,” Mark Kennard said. The 6-3 Arizona-bound Trier is also excited to play. “Yes,” he said. “Zo would be honored to play,” his mentor, Steve Goldstein, told SNY.tv. The 7-foot Zimmerman, who was also on the U18 team, said he would “love to play.” Newman, Swanigan, Stone and Rabb all won gold with the USA U17 team last summer at the FIBA World Championship in Dubai, with Newman earning MVP honors. “It felt great,” Newman said then. “We had a lot of players who played tremendous at this camp, so for those guys to think that I won the MVP was just an honor.” Photo: USA Basketball