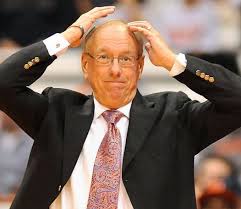 Syracuse may not have been headed to the NCAA Tournament anyway. Now they definitely won’t be dancing. The University on Wednesday announced it previously notified the NCAA that it has instituted a self-imposed post-season ban for the men’s basketball 2014-15 season as part of its case pending before the NCAA Committee on Infractions. Syracuse (15-7) is not currently listed in Joe Lunardi’s NCAA Tournament bracket and were a bubble team at best. “I am very disappointed that our basketball team will miss the opportunity to play in the post-season this year,” Syracuse coach Jim Boeheim said. “Senior Rakeem Christmas has been an outstanding member of the team for the past four years. However, I supported this decision and I believe the University is doing the right thing by acknowledging that past mistakes occurred. Our players have faced adversity and challenges before. I know they will rise to this challenge by keeping our program strong and continuing to make our University proud.” Christmas and fellow co-captains Trevor Cooney and Michael Gbinije made the following statement: “We are all tremendously disappointed that we are going to miss out on playing in the postseason based on issues that do not involve us. However, we support our school and this won’t change how hard we will continue to work in practice and in games.” The University said it “initiated the case when it self-reported potential violations within the Athletics Department to the NCAA in 2007. Much of the conduct involved in the case occurred long ago and none occurred after 2012. No current student-athlete is involved. In addition, beginning in 2007, the University took a series of actions to reform and strengthen existing policies and procedures, implement a series of best practices, and realign and improve a range of student-athlete support services. “The University appeared before the NCAA Committee on Infractions in October 2014 and has continued to cooperatively engage with the Committee. As a further means of acknowledging past mistakes, the University notified the NCAA that it will be voluntarily withholding the men’s basketball team from post-season competition following the current 2014-15 season. This one-year ban includes the ACC Tournament and any additional post-season tournaments such as the NCAA or NIT Tournaments. This action is accompanied by other self-imposed penalties the University also instituted and which the NCAA Committee on Infractions will make public when it issues its final report. The ACC Tournament will now have 14 teams instead of 15, and teams will “slide up to replace Syracuse once the regular season ends,” ESPN’s Andy Katz Tweeted. “Syracuse is included in tiebreakers for seeding.” Chancellor Kent Syverud said, “Syracuse’s history demonstrates a strong commitment to integrity, responsibility and fairness—values I have personally observed in practice many times since becoming Chancellor last year. The University has taken this matter seriously and worked with the NCAA for nearly eight years to investigate and address potential rules violations. The process has been exhaustive. We have taken responsibility for past violations and worked hard to ensure they are not repeated. I am disappointed for our current men’s basketball players who must shoulder this post-season ban. I also recognize that not participating in post-season play will be disappointing for many in the University community and to all Orange supporters. However, we look forward to moving past this matter and I am confident the men’s basketball program will be strong and successful both on the court and in the classroom in the years ahead.” Director of Athletics Dr. Daryl Gross said, “This has been a long process and while this is a tough decision it is in the best interest of the Athletics Department and the University. My greatest disappointment is for the players who will be affected by this outcome even though they were not involved. I am also mindful of the passionate and loyal members of Orange Nation who look forward to post-season play. In the end, I am confident our program will continue to compete at the highest national level and remain strong.” Newly-appointed Faculty Athletics Representative and Falk Distinguished Professor of Sport Management Rick Burton said, “Every Division I program faces challenges and while this is a tough decision for the University and its students, faculty, staff and fans, it helps to close this particular chapter and allows us to focus on the future.” As the NCAA case has not yet concluded, per NCAA bylaws the University is unable to provide additional details or comment further at this time.