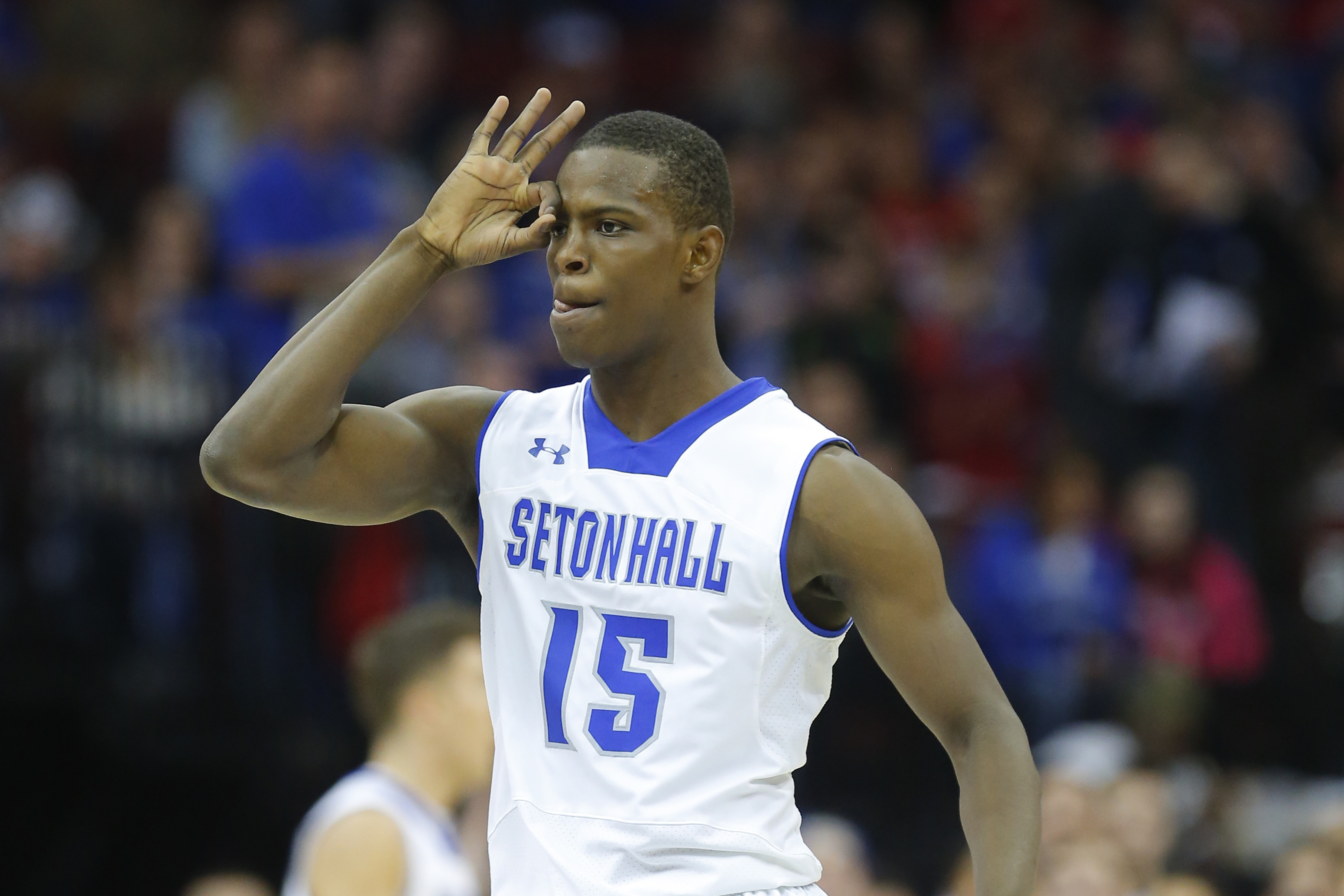 By JOHN PAVIA NEWARK –– Despite missing the previous nine games with a foot injury, Isaiah Whitehead looked like he hadn’t missed a beat in Seton Hall’s 90-82 victory over Xavier at the Prudential Center on Saturday. Whitehead, playing in his first-ever Big East game, poured in 19 points off the bench in 23 minutes of action, and he might have played a bit longer if it wasn’t for foul trouble. He also grabbed four rebounds, dished out three assists and collected three steals as he made his presence well known on the defensive end. Whitehead, along with Sterling Gibbs, helped seal the victory at the foul line in the final few minutes as he finished 8-for-10 from the charity stripe. “Honestly it looked like he never left,” Xavier coach Chris Mack told reporters of Whitehead. “This was about getting my feet wet, and once I got my confidence back, the sky was the limit,” Whitehead said, according to Jerry Carino. “It felt great just to see my team with that emotion, playing their hearts out, and we got the win. It was a great day.” Gibbs also played an excellent game for Seton Hall as he made six foul shots in the last four minutes and four of them in the final minute to help his team pull away. He finished with 22 points and eight assists. Desi Rodriguez, Angel Delgado and Brandon Mobley also finished in double-figures for the Pirates. Freshmen Trevon Bluiett and Jalen Reynolds helped pace Xavier; Bluiett finished with 19 points and Reynolds had 17 points and eight rebounds. Seton Hall’s perimeter defense was very important on Saturday as the Musketeers shot only 1-for-19 from beyond the arc. Seton Hall coach Kevin Willard touched upon Whitehead’s impact both physically and emotionally in this crucial conference game. “You guys watched the game,” he said. “I’ve said this all along that it’s not the offense. Obviously, the offense was great. What he did and what he can do, it’s on the defensive end. I mean, he gets three steals, he had nine deflections, he had some big rebounds, he gets fouled. So it’s just not the offensive side, I think it’s on the defensive side and the intangibles. I mean, he hasn’t played in six weeks, he’s diving on the floor and he’s taking charges. I think that more or less was the biggest boost that he gave us. Obviously, everyone knows if they run hard they’re going to get the ball from him, but he picked us up with the intangibles.” Willard also mentioned that Whitehead was “seven minutes over” their goal for his minutes. “Our goal was 16 to 18 [minutes],” Willard said. “Not for the foot, but just for the rest of his body. I didn’t think I was going to be able to take him out at the end of the game so that’s why we went over, but the end of the game wasn’t as fast-paced so I don’t think the extra seven minutes or six minutes was that big of a deal.” Willard said they would limit Whitehead in practice “a little bit and monitor him for at least the next two games.” He also referred to Whitehead’s fitness not being fully back to where it was before the injury, but was not surprised by his aggressive play. “I think it’s been a long time,” he said. “Everyone kind of forgot how he played. He’s played like that since he’s been here. His foot feels good, his body got a little sore and he got a little winded. He’s never asked me to take him out and he asked me to take him out twice.” Down the stretch, Whitehead was visibly amped up as he started to draw more fouls and get to the free throw line. He also tried and succeeded in pumping up the crowd as Seton Hall gained all the momentum in the waning minutes. “You know, he was excited, he was a little nervous. That was his first Big East game. Everybody forgets. Yeah, he’s played 11 games, but that was his first Big East game. I think he proved to everybody of who the player he is.” Follow John Pavia on Twitter And Like ZAGS on Facebook