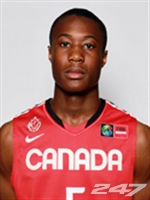 By JACK LeGWIN MONTVERDE, Fla.- Canada has another face who will emerge soon. His name is Koby McEwen. At 6-foot-3, the young point guard has played extremely well thus far this season leading Wasatch Academy (Ut.) to a 14-7 record heading into a showdown with the host and nationally-ranked Montverde Academy (Fla.) tonight. After a 14 point, performance in a 93-76 win over Constitution (Pa.), McEwen said that he has two offers from Ole’ Miss and Baylor, but according to him, those two schools aren’t working the hardest. “I haven’t heard from them lately,” McEwen told SNY.tv. “The schools that have been really trying to get me lately though are Oklahoma, Butler, Oregon, Davidson, Utah and Middle Tennessee State. I guess those guys since they offered me think they don’t have to work for it, but I haven’t heard from them since, so I don’t know.” Ranked No. 98 in the class of 2016 by Rivals, McEwen said that a key factor in his decision will be looking for a coach that he trusts, as well as one that he can improve with. “I’m looking for a school with a coach that is going to be on me, and who is going to want me to get better,” McEwen said. “I’m looking for a system where I can do my thing, where I can run the team the way I’m best at. Just a place where I can get better.” McEwen is an extremely active point guard on the defensive end, both on, and off ball. He frequently caused turnovers by getting a hand in the lane and showed an ability to score at all three levels. “I feel like I bring a versatility to the game,” McEwen said. “I can rebound, I can pass, I can score, I can shoot, I feel like I can do everything. If I can continue to be consistent and continue to learn, I feel like the sky is the limit.” All five starers from Wasatch Academy are from Canada, and McEwen said not only it is a privilege to represent his home country with his teammates, he is doing his best to make his country proud. “It feels amazing,” McEwen said. “It’s one of the best things ever. To come here and showcase your talents. We are here to show that Canadians can play basketball too, I just wanted to come here and do my thing. Everyone is trying to come here to show that we can play basketball with the best and we’ve got a big test against Montverde tomorrow night.” McEwen confirmed that will be representing Canada on the EYBL Circuit this summer on CIA Bounce alongside Brandon Cyrus, Jamal Murray and Nelson Kaputo. He said that the best way he can make a name for himself during the high school tournament and especially on the circuit, is to continue to work hard. “Coming to these tournaments and balling out,” McEwen said. “Every game is big for me, I never get to rest. If I do that, it should take care of itself.” If he does that, Koby McEwen will be a name that will be recognizable for years to come. Follow Jack on Twitter