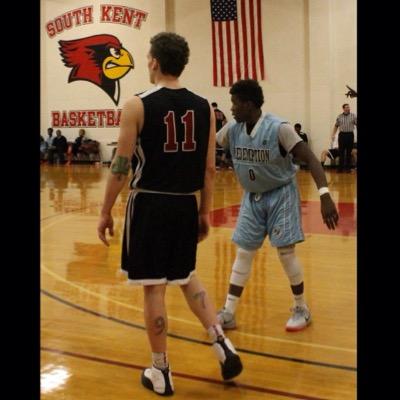 NEW YORK — Travis Atson enjoyed a victorious return home. On Monday, the 6-foot-5 Brooklyn native went for 21 points on 7-for-18 shooting, 5 rebounds and 3 assists as South Kent (Conn.) beat Genesis Academy (Va.), 69-61, at the Big Apple Basketball Invitational at Baruch College. “I had a good game. I missed a lot of shots, could’ve made a lot more shots, but we got the win so that’s all that matters,” Atson told SNY.tv. When Atson returned to the city on Monday, his family and several friends were in the stands cheering him on. “I was a little nervous at first but it just felt good to play in front of my family,” he said. “A lot of family came out, a lot of friends. It felt good.” Aston left defending New York State Federation champion Christ the King after last season and reclassed because he said he wanted a change of pace. “I just wanted another year and I wasn’t comfortable where I was at,” he said. He’s now at South Kent, a rural prep school in Connecticut where there isn’t much to focus on except books and basketball. “Nothing to do at all,” he said. “The gym is 10 feet away from my room, so I’m basically there all day.” South Kent also plays in the tough NEPSAC league against many other New England powerhouses. “The competition is a lot better,” he said. “Practices are a lot harder, it’s against greater guys and it’s just a better atmosphere.” South Kent coach Kelvin Jefferson is no stranger to New York City kids, having coached Maurice Harkless, Derrick Randall and Russ Smith, among others. He speaks highly of Atson, too. “South Kent is not Brooklyn, so [there were adjustments made] being in the woods as opposed to being in Brooklyn,” Jefferson said. “Being at an all-boys school as opposed to not, so there were things he had to get used to but he’s a great kid and he fit right in.” On the basketball court, Atson’s game is growing, too. “The sky’s the limit for the kid,” Jefferson said. “He’s really learning how to make the move from an interior player to a perimeter player. He’s improving his ball-handling, he’s improving his shooting. For a guard his size, he’s one of the best rebounders in the country. He’s doing things this year that he hasn’t done the previous couple of years, so I think as he gets more comfortable out there, he can be as good as any guard in the country.” Atson’s recruitment has taken off since he arrived at South Kent, but he says MAAC power Iona is working the hardest at the moment. Iona associate head coach Jared Grasso was in the stands Monday, as were coaches from UConn, Rutgers, Seton Hall, Miami, West Virginia, Quinnipiac, BU, FDU, Yale and elsewhere. “Iona right now is really, really working hard,” Atson said. “I just love their style of play, how they get up and down the court fast, and it’s close to home, too. [Distance] doesn’t really matter to me right now, but in the end it probably will. I haven’t decided yet.” Atson also listed Florida, Xavier, Boston University, Clemson, Duquesne and DePaul as schools showing interest. “Obviously, there’s more of an impact he could make at a mid-major program,” Jefferson said. “Can he go to a high-major program? Absolutely, absolutely. So he’s gotta decide what’s best for him and then go from there.” Atson said he hopes to make a decision sometime in the fall. “Probably around October,” Atson said. Wherever he goes, “I will bring a lot of energy on the court and just do the best I can.”