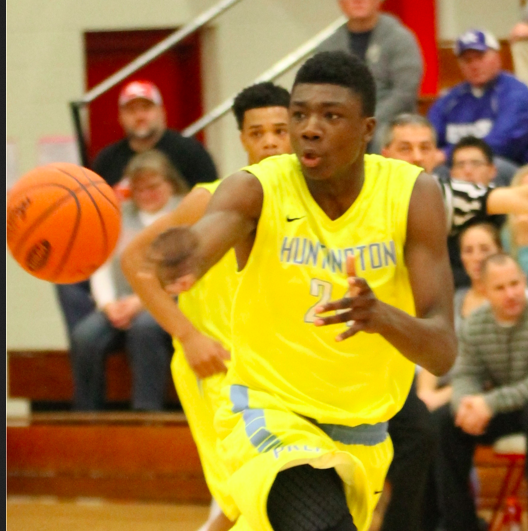 By EDDIE GIBBON SPRINGFIELD, Mass. — In one of the biggest individual and team matchups of the Hoophall Classic, Thomas Bryant and Huntington (W.V.) Prep handled Cheick Diallo and Our Savior New American (N.Y.). With Kentucky head coach John Calipari and Syracuse associate head coach Mike Hopkins sitting front and center, Huntington Prep won, 76-57, and Bryant finished with a double-double of 11 points and 10 rebounds. The 6-9 Diallo — who is considering Kentucky among his five schools but remains wide open — went for 24 points and 9 rebounds in the loss. “That’s great [that Calipari was there],” the 6-foot-10 Bryant said. “It shows me that I keep improving, and each and every day I will keep improving because having coaches like Calipari and all those guys coming to your games it shows you that you’re doing something right.” Calipari has stepped up his recruitment of Bryant, who took an unofficial to Lexington last week for the Missouri game.Calipari recently watched Bryant play in Kentucky, and then saw him again here at he Hoophall. Kentucky could lose three centers — Karl-Anthony Towns, Willie Cauley-Stein and Dakari Johnson — to the NBA Draft, and will need to add bigs in 2015. “They’re recruiting me pretty hard,” Bryant said. “I’m just taking it day by day with the colleges.” Asked what he liked about his visit to Kentucky, Bryant said: “Just how they utilize their players. Their motto is they play big and guard like guards. You need to play hard, play smart and play together. That’s what the team is all about.” Bryant also said he’s a fan of the platoon system. “His platoons are great,” he said. “With that everybody plays the same equal minutes, [Calipari] utilizes everyone that’s in the platoon system. He puts the team together that plays the best together, whether it’s the white platoon or blue platoon.” Bryant listed Kentucky along with Indiana, Missouri and Syracuse as his final four schools. He will decide sometime this spring. Former Huntington Prep coach Rob Fulford is an assistant at Missouri, but Bryant isn’t going to let that relationship affect his college decision. “It’s a little bit of a factor, but I try not to let relationships come between me and my decision,” he said. “This is about me, and not anyone else. It’s for my future.” It has long been assumed that Syracuse is the favorite to land Bryant as he grew up in Rochester. His mom has even made it clear that she wants her son in Orange next year, but Bryant doesn’t seem easily swayed. “That’s her opinion,” Bryant said when asked about it. “I need to look for the best program that fits me, and where I want to go.” When asked what he likes about his final four schools Bryant said, “They utilize their bigs. They aren’t limited to just one thing.” In terms of a timetable, Bryant said he should have a decision by the end of the high school season by the latest. Bryant has two official visits remaining and plans to use one of those on a return trip to Kentucky, although no date has been set yet. Follow Eddie on Twitter