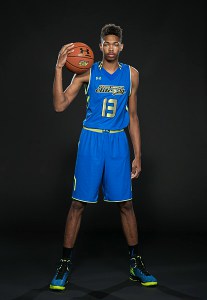 By EDDIE GIBBON SPRINGFIELD, Mass. — Brandon Ingram scored 22 points and dished out 4 assists as Kinston (N.C.) came from behind Saturday to beat Syracuse-bound Malachi Richardson and Trenton Catholic, 56-54,  at the 2015 Hoophall Classic. “I know when I play good, they play good,” Ingram said after the game. “When I play well the other guys rebound hard and play good defense.” The 6-foot-9 Ingram, ranked 12th in the country by ESPN.com, is considering a final six of Duke, Kansas, Kentucky, North Carolina and N.C. State. He said he plans to visit Kansas, Kentucky and UCLA down the road. UCLA assistant David Grace was among those on hand for this game. Ingram is not close to making his college decision and is really trying to focus on winning his fourth straight state championship. Ingram said he has the best relationship with three in-state coaches, Roy Williams of North Carolina, Mike Krzyzewski of Duke and Mark Gottfried of N.C. State. “They’ve been recruiting me my whole high school career,” he said. Ingram also broke down all six schools on his list: N.C. State: “They have been recruiting me for a really long time. Of course they need a big wing like all the other schools, and I know they’ll put me in a good position. They always talk about the T.J. Warren role, and that would be good for me.” North Carolina: “Of course they need a shooter, and I would dive right in. They want me to score the ball.” Duke: “They’re a great program with great fans. Good people around campus.” Kansas: “It’s a basketball city. I loved it out there when I visited for their Midnight Madness. I love everything about coach Norm Roberts and coach Bill Self.” Kentucky: “Just a basketball world. They always have great guys coming.” UCLA: “I love everything about the coaches, we have developed great relationships. Plus, it’s California.”  Follow Eddie on Twitter