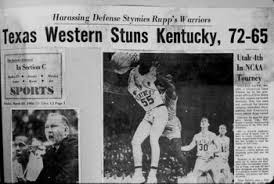 Kentucky and UTEP won’t play their 50th anniversary game in 2016, much to the chagrin of UTEP coach Tim Floyd. Floyd had hoped the two schools could meet on Maryland’s campus around the time of Dr. Martin Luther King Jr. Day to commemorate the 1966 NCAA championship game between an all-white Adolph Rupp-coached Kentucky squad and a Texas Western team that started five African-American players in the NCAA title game for the first time in college basketball history. Texas Western won the game, 72-65, at Cole Field House in College Park, Md. The game was featured in the 2006 film “Glory Road.” “[Kentucky] just backed out, said that there were a lot of people up there that didn’t want the game to be played, for whatever reason, so I don’t want to throw them completely under the bus, but that’s ok, we’ll just stay with a 1-0 record against the Kentucky Wildcats in college basketball,” Floyd told KTSM in El Paso. “If they never want to play again and act like the game never happened, for the reasons why it occurred are significant, then we’ll never play again.” Kentucky coach John Calipari said this week he’d be happy to play the game – at Rupp Arena. “I get it,” he said. “If they’d like to play us, I’m fine with it. Tim knows I’m fine with it. We can try to work something into the schedule if they want to come here. But I just don’t think we can play. I don’t blame the school. I don’t blame them.” He added: “Tim and I are friends. We had talked but part of the issue here is, we just can’t play road games. We can’t play a couple road games and our neutral games, financially, are like a home game. Not when you seat 25-thousand.” Kentucky spokesman Eric Lindsey told the Courier-Journal: “We didn’t back out of anything because we never agreed to play the game. There were discussions about the possibility of playing, but they never materialized past that. It just didn’t work out. Next year our schedule is pretty set as far as games away from home. “We’re still looking for a couple of games at home, but we didn’t have room in the schedule for what we had discussed earlier. We would be open to playing them in future seasons.” UTEP says it hopes to replace the game with another significant opponent.

SMU Receives Notice of Allegations From NCAA Regarding Academic Impropriety