St. John's Drops to 0-3 Big East and Once Again Must Dig Itself Out of a Hole | Zagsblog
Follow @adamzagoria

St. John’s Drops to 0-3 Big East and Once Again Must Dig Itself Out of a Hole 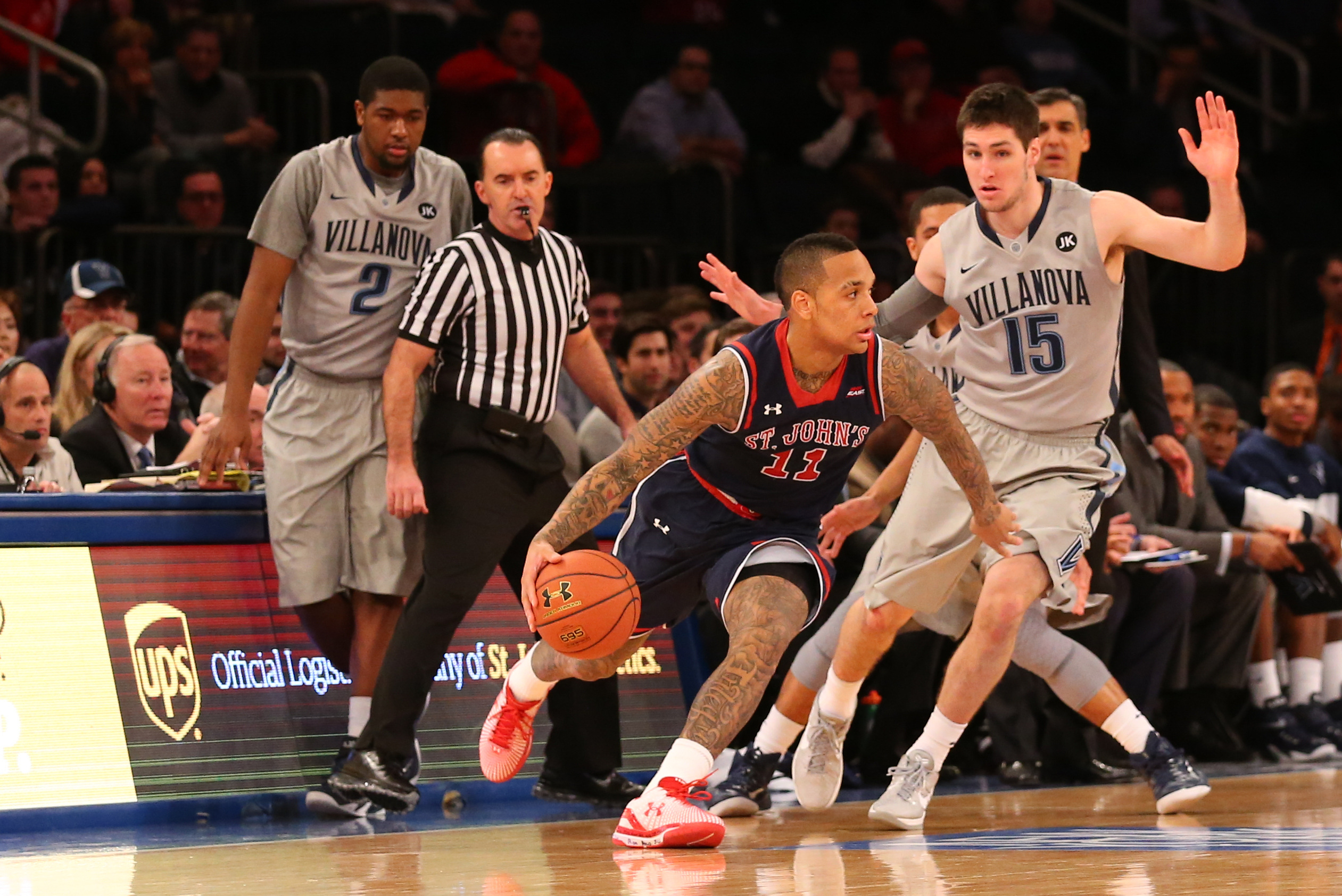 NEW YORK — D’Angelo Harrison limped into the Madison Square Garden press room with his left knee wrapped in ice and his lower lip busted up. Harrison played bravely, scoring a game-high 25 points as No. 24 St. John’s lost to No. 8 Villanova, 90-72, but the state of Harrison’s body mirrored the state of the St. John’s program at the moment. They are battered and bruised, having gotten off to an 0-3 Big East start one year after their 0-5 beginning doomed their NCAA Tournament hopes. “I’ll be alright for Providence,” a defiant Harrison insisted after his team lost to Villanova for the sixth straight time. “I’m fine, I’ll be alright.” Whether St. John’s NCAA Tournament hopes will be alright remains to be seen, but head coach Steve Lavin is conscious of the fact that his team — ranked as high as No. 15 this season — can’t afford to dig itself another hole as deep as last year’s. “When you look at our schedule, we’re playing really good teams,” Lavin said. “Seton Hall is No. 19. Butler beat Georgetown and they beat North Carolina and this team [Villanova] has been the perennial champion of our league and they’re in position to do it again…It’s just a really strong league so there will be no off nights.” Indeed, ESPN’s Joe Lunardi currently has seven Big East teams in the Big Dance, and most recently had St. John’s as a 7 seed. “We could get seven teams definitely in,” said Villanova coach Jay Wright, who won his 300th game at the school. “What’s going on right now doesn’t matter. We all did a great job in the non-conference schedule but how you compete within your conference is really important, too. If you don’t compete in your conference you’re not going to get in. “I think we have eight teams in the conference good enough to get in….This is going to be a wild conference, a lot of really good teams.” It’s early and St. John’s is still 11-4 with a couple of solid wins over Syracuse and Minnesota. They are ranked No. 35 by KenPom. But they can’t afford another 0-5 league start. They’re next two games are at Providence and at DePaul, which is 2-0 in the league. After that they host Marquette and then Jahlil Okafor and Duke in a Jan. 25 matinee at the Garden. “The schedule comes our way in February but we need to be productive enough in January so that we’re in position for those games to be meaningful because you don’t want to be so far behind that those games aren’t even meaningful,” Lavin said. “It’s a daunting task when you’re 0-3.” Lavin then rattled off the “good news” about his team as it relates to overall wins, RPI, conference RPI, strength of schedule, etc., before concluding: “Unless we move enough going forward that won’t even be a talking point.” A year ago, St. John’s finished strong, going 10-8 in the league after starting 0-5. But they lost a must-win game to Providence in the Big East Tournament and then got crushed by Robert Morris in the NIT. This year, with a senior-laden team and all the chips on the table and Harrison saying it would be a “complete failure” if they don’t make the NCAAs, the margin for error is that much thinner. http://web.sny.tv/media/video.jsp?content_id=37111295&topic_id=6479520