BY JEREMY FUCHS NEWARK– A week after Kentucky coach John Calipari praised the wealth of talent in New Jersey, a few Jersey kids and a few kids from New York City helped Seton Hall pull off the upset against No. 15 St. John’s, 78-67, Wednesday afternoon at the Prudential Center. And though Kevin Willard reached into Brooklyn this past recruiting period to land McDonald’s All-American guard Isaiah Whitehead, it was a group of four players from the larger Tri-State area who stepped up while Whitehead is dealing with a stress fracture. Khadeen Carrington, the freshman from Bishop Loughlin in Brooklyn, and Angel Delgado, the freshman from the Bronx who played at The Patrick School in Elizabeth, helped the Pirates beat a really good St. John’s team. Junior guard Sterling Gibbs, from nearby Scotch Plains and Seton Hall Prep, and sophomore guard Jaren Sina, from Gill St. Bernard’s, won the battle against the talented St. John’s guards, and proved that this team can be competitive without Whitehead. 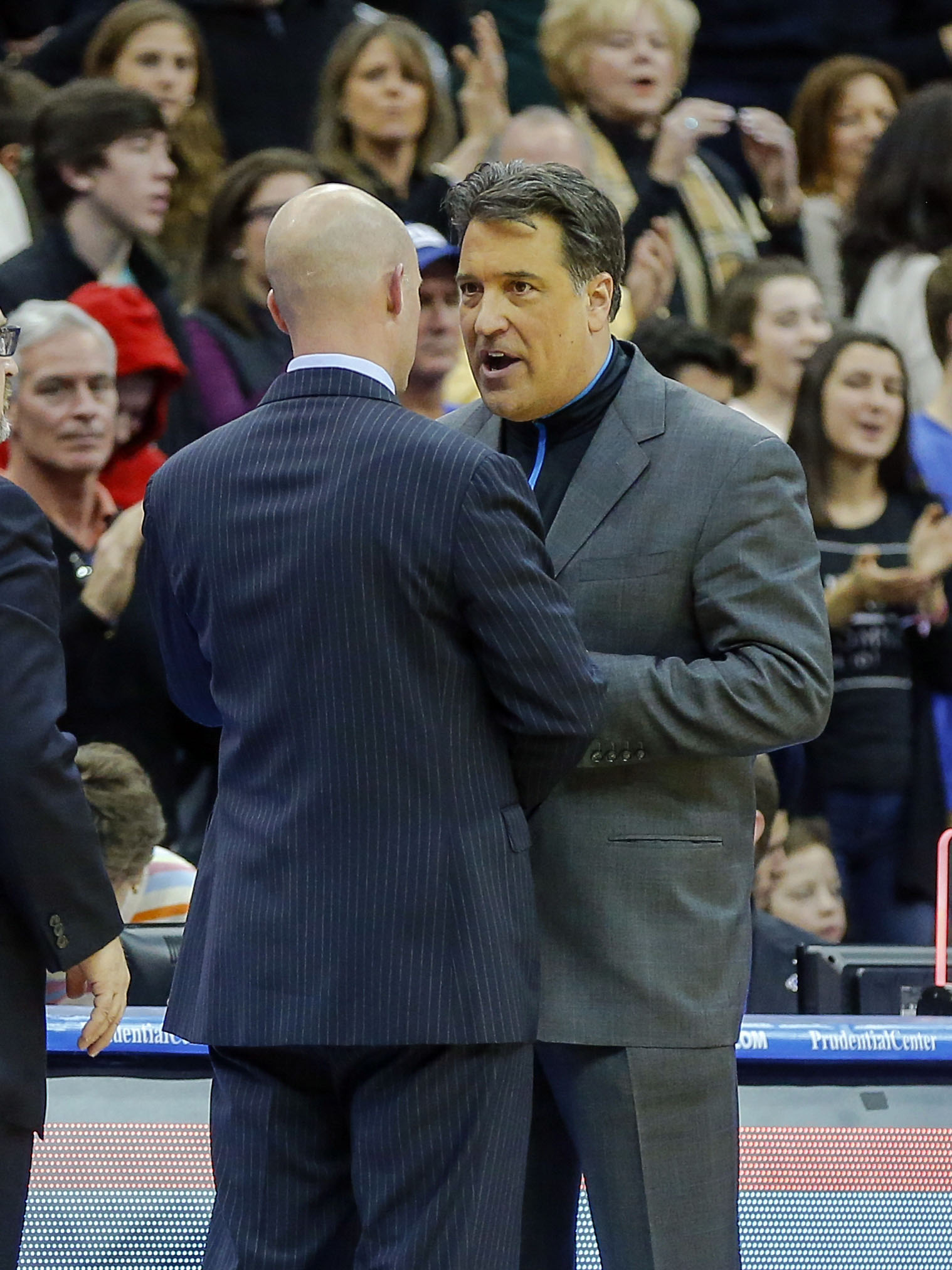 “This area, what I love about this area, people appreciate good basketball,” coach Kevin Willard said after the game. Carrington, a 6-3 guard who came into today’s contest averaging 7.2 points and 2.8 rebounds, drove the Hall with his energy. He finished with 11 points. On one play in the first half, Carrington battled for a rebound, threw the ball off of St. John’s forward Chris Obekpa, took the ball the other way and drew a foul. He also drew a charging foul on St. John’s do-everything forward Sir’Dominic Pointer, who was held to only four points. “I always wanted to play in the Big East,” Carrington said. “That was a great test. I think I did a pretty good job.” The Brooklyn native said that this game was about bragging rights given that the teams are so close. “We try to represent the school, Jersey, represent New York too,” Carrington said. “There’s pride to it. We play for where we come from.” 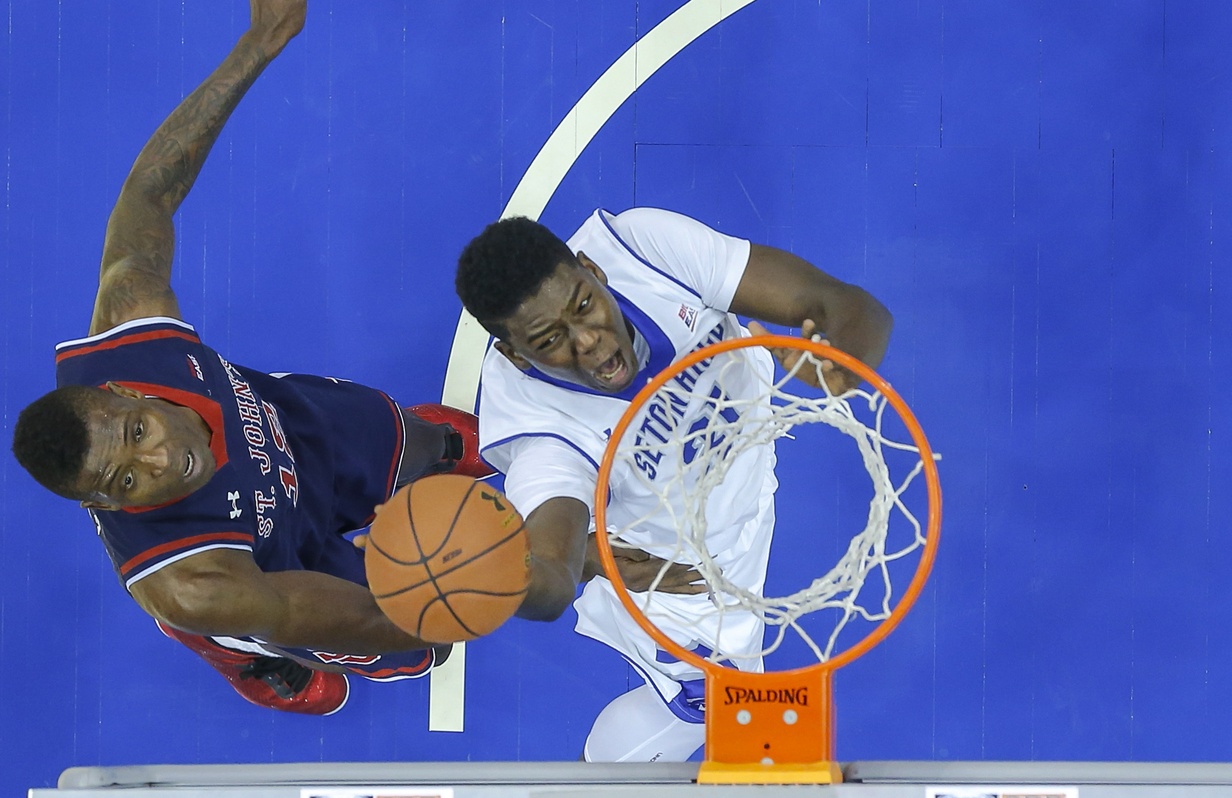 Carrington has begun to play a more important role for the Pirates as the season progresses. Since the game against Mount St. Mary’s at the beginning of December, Carrington has averaged over 24 minutes of action, and just over nine points per game. The all-time leading scorer at Bishop Loughlin, Carrington was a coup to the recruiting class. The guard was the MVP of the 2014 Jordan Brand Classic Regional Game, with 18 points, seven rebounds and five assists. “Khadeen played the best he’s played all year, Willard said. “I thought he played terrifically.” Coming into the game, one of the big matchups to keep an eye on was the battle down low between Delgado and Obekpa. Obekpa is one of the better big men in the nation, averaging 8.8 rebounds per game. He is also the active Division I career blocks leader, with 3.53 per game. Delgado, though, was up to the task. The 6-9 forward scored 13 points and had 12 rebounds. More importantly, he held Obekpa to only five rebounds, helping the Pirates win the rebound battle 37-32. 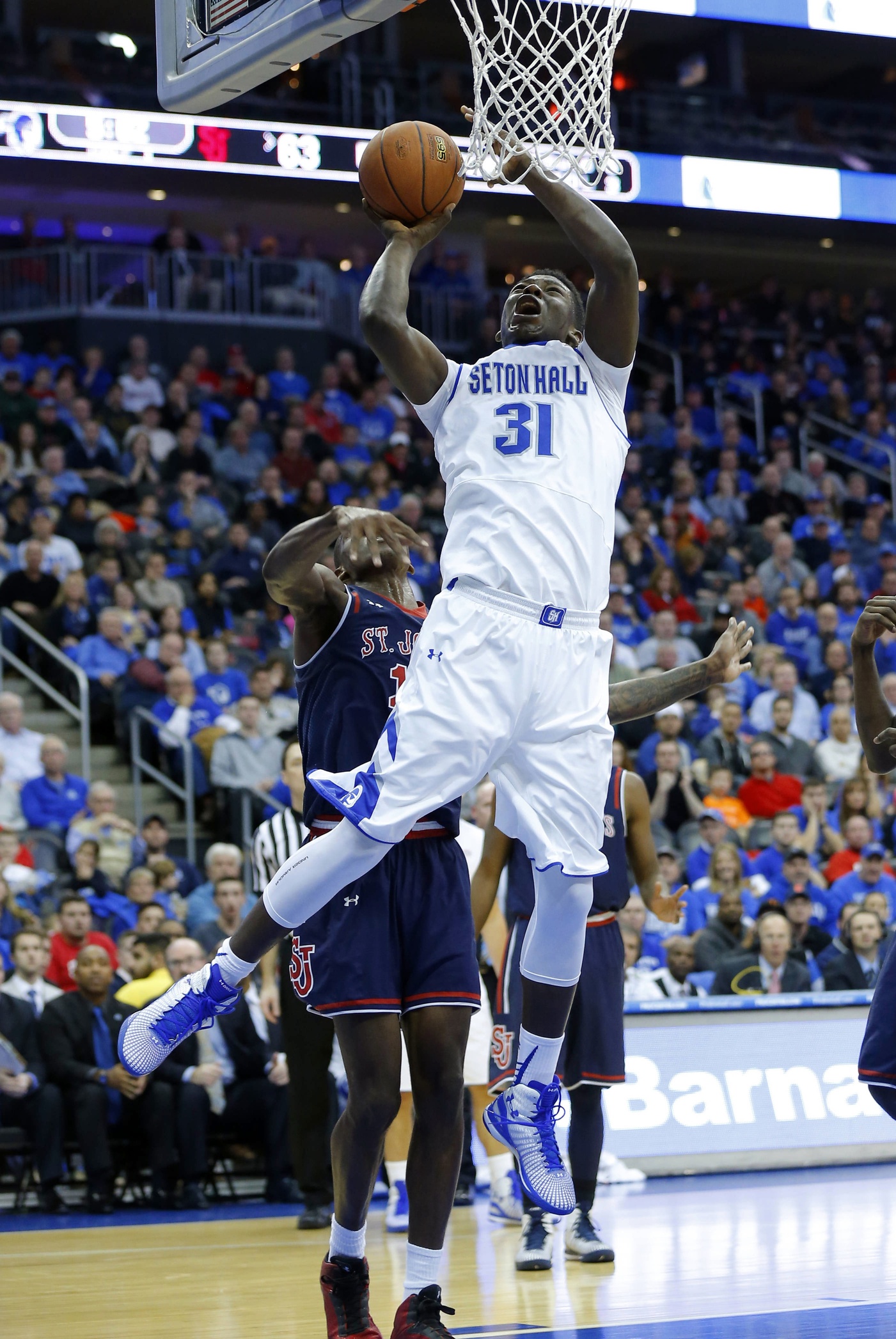 “I think I did great, but I think about my team always,” Delgado said. “I’m trying to focus on my rebounds. If I get a rebound, my teammates can get the ball.” The Big East Rookie of the Week for the week of Dec. 29, Delgado has gone under the radar in South Orange, overshadowed by the play of Whitehead. Quietly, he is third among freshman in the nation in rebounds behind Kevon Looney of UCLA and Jahlil Okafor of Duke. Okafor is the consensus next No. 1 overall pick in the 2015 NBA Draft, and Looney is projected by DraftExpress to be the 10th overall pick. The 48th-ranked recruit, according to the ESPN 100, Delgado has a burgeoning post game, and his defense, noticeable on a good play down low against star Johnnies guard D’Angelo Harrison, is becoming quite impactful. “Angel’s been Angel,” Willard said. “That’s what he gives us every game. That’s what that kid does.” St. John’s coach Steve Lavin thought Delgado played well. “I’m impressed with his strength, the ability to get on the boards,” Lavin said. “I think he’s got a tremendous future.” 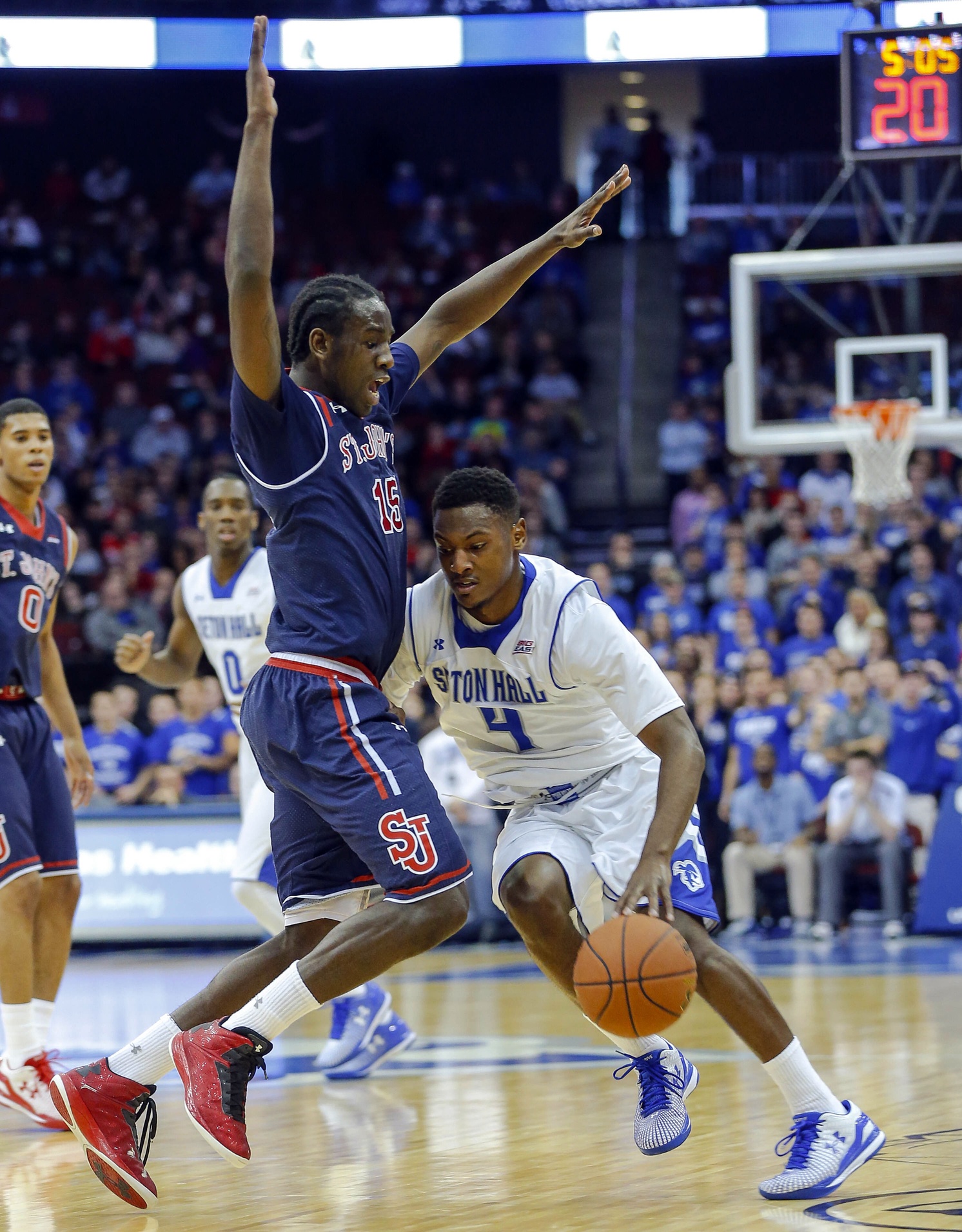 The Pirates also benefited from the strong play of Gibbs, who scored 25 points. Gibbs, who came into the contest averaging 15.6 points, has had to shoulder the offensive load with Whitehead out. In the three games without Whitehead, Gibbs has averaged 15 points. Gibbs also held his own against Harrison,  who also scored 25. “That was one of the better performances in my college career in terms of an opposing point guard,” Lavin said. “Eight assists with zero turnovers in 38 minutes, [that’s] as close to a masterpiece for a leader and a point guard as you can have.” Asked for his response, Gibbs was taken aback. “That’s a big compliment,” Gibbs said. “I know he’s coached against top players. I just want to improve on it.” St. John’s, the No. 15 team in the country and ranked 16th in KenPom’s rankings, is amongst the class of the Big East, right there with Villanova. Enterting Wednesday’s game, their only blemish was a tough loss against Gonzaga, the No. 7 team in the nation. The performance by the Hall today showed the quality job Willard has done recruiting and the depth they have developed. It also is Seton Hall’s best win on the year, and puts a really nice line on their resume for a potential NCAA Tournament berth. The Hall tried to use as much of the shot clock as possible against the Johnnies, hoping to slow down the quick guards in Harrison and Rysheed Jordan, who scored just 11, despite averaging 14.3 on the season. In addition to milking the clock, the Hall consistently made the extra pass, including a number of times to Sina, who scored 14 on 5-of-9 shooting, including five in the last minute and a half of the first half. Sina, who entered today’s game averaging 7.3 points per game, shot 4-of-8 from beyond the arc, despite only shooting 35 percent from distance on the season. Whitehead is out for at least the next game against No. 6 Villanova. Whitehead is the best player on this team, as no one can match his all-around game. But the emergence of Carrington, who played his high school ball just eight miles from Whitehead at Abraham Lincoln, as well as the play of Delgado and Gibbs, gives them a fighter’s chance. “This has always been more than Isaiah,” Willard said. “I have a lot of trust in my guys right now.” Follow Jeremy on Twitter