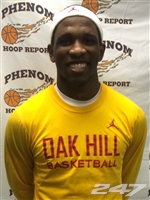 By CHIP MILLER Oak Hill Academy (VA) point guard Terrence Phillips highlights this weekend’s official visits as he takes the first of two currently scheduled. The first, starting Sunday and ending Monday, is to home state Loyola Marymount in Los Angeles. Phillips, a California native, recently gave SNY.tv his thoughts on the Lions. “Well for one it’s back home for me,” he said. “Growing up in California, being back home, playing around my family, which is a big thing I’m looking at for them right now.” Phillips still holds no official offer from Loyola but says he’s expecting the Lions to offer while on campus. “I’m assuming when I go on my official to LMU they are going to offer me,” Phillips said. Missouri is next on the visit list for Phillips as he will travel to Columbus on Jan. 2-4, then he hopes to make a decision before his birthday. “In all honesty, if it comes to a late decision it just happens to be that, but I kind of want to get it done before my birthday, Jan. 12,” he said.

* Christ The King (NY) shooting guard Rawle Alkins went for 18 points and 18 rebounds on Saturday to lead CTK to a 63-51 victory over Gonzaga College Prep at Slam Dunk to the Beach. Alkins, who recently started recieving interest from Kentucky, holds offers from Kansas, Indiana, Louisville, Villanova and Miami among others.

* Tyus Battle continues to be plagued by an ankle injury. The five-star 2016 guard missed Gill St. Bernard’s game on Saturday and is expected to miss todays game at Slam Dunk to the Beach. Battle is being recruited by the blue bloods of college basketball and recently discussed Duke and Kentucky with SNY.tv.

* Antonio Blakeney scored 30 points on Saturday to help lead his Oak Ridge (Fla) team to a 71-62 win. The five-star 2015 shooting guard is still undecided on his college future but is considering LSU, Kentucky, Missouri, North Carolina and N.C. State. Blakeney recently reported he planned to sign late, but that may change.

* Malik Newman continues to dazzle fans, this time it was a 44-point performance in a 83-62 win on Saturday. Newman has yet to officially release a list but has hosted several in-home visits and recently discussed playing with Kentucky commit Isaiah Briscoe.

* Speaking of scoring, Duke signee Luke Kennard is the player who currently holds the Beach Ball Classic scoring record of 52 points, hitting 18-26 from the field, 2-6 from three-point range and 14-17 from the free throw line to go along with 15 rebounds in a win on Friday.