NBA Scout: Cauley-Stein ‘Made Himself Some Money Tonight’ 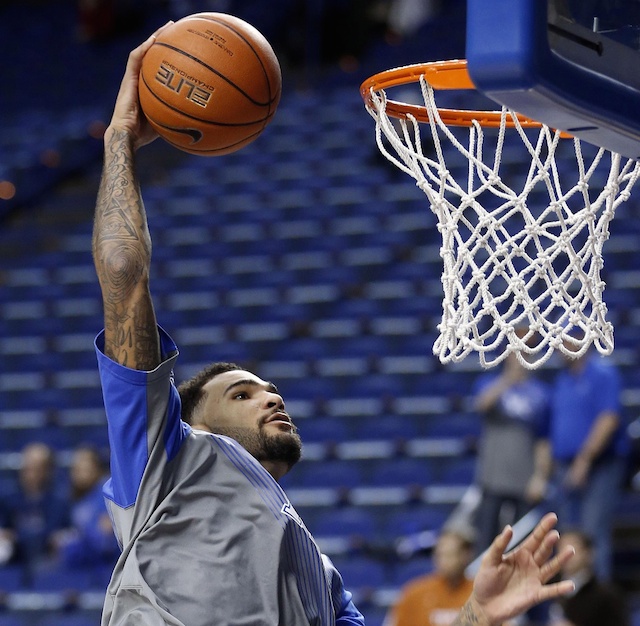 Kentucky’s Willie-Cauley Stein sure helped his draft stock on Friday. The 7-foot junior went for 21 points, 12 rebounds, 5 steals and 3 blocks and made several key defensive plays in No. 1 Kentucky’s 63-51 victory over No. 6 Texas at Rupp Arena. “Made himself some money tonight,” one  veteran NBA scout told SNY.tv. “Best player on the floor.” Cauley-Stein is projected as the No. 9 pick in the 2015 NBA Draft by DraftExpress.com. He said he returned to campus for his junior year to improve his draft stock. “For sure,” he said. “You know, that is one of the biggest reasons that I came back is to just develop myself more as a basketball player. I feel like I am just starting to do that. It’s only December. I still have three months left.” “I wish he was on my team, that’s what I think about him,” Texas coach Rick Barnes said. “He really is terrific and in the zone he did some things in there….Even in the zone he was terrific. He affected the game in every way he could affect it. I mean, his steals I thought getting around him, most guys like that don’t even try to get around. They are just sit back there and let you get it, try to guard you. But he does his work early and he was very impressive.” “Well, he was ridiculous today,” Kentucky coach John Calipari said. “He’s older, more mature. The biggest thing I’m working on him with our people, and Kenny [Payne] is, he’s got to come to wide bases when he comes to a stop. When his feet are really close, he’s just got no balance and he just flops around. When he comes to that wide base, he’s 7-foot and he just jumps over the guy. He reaches up, literally he’s shooting the ball and he’s above the square (on the backboard) shooting down. The other thing is I like the fact that he made free throws today. I liked the fact that he’s not afraid to shoot the ball in the middle.”

NCAA Looking Into Kentucky Signee Labissiere, Guardian Says, 'We Have Nothing to Hide'