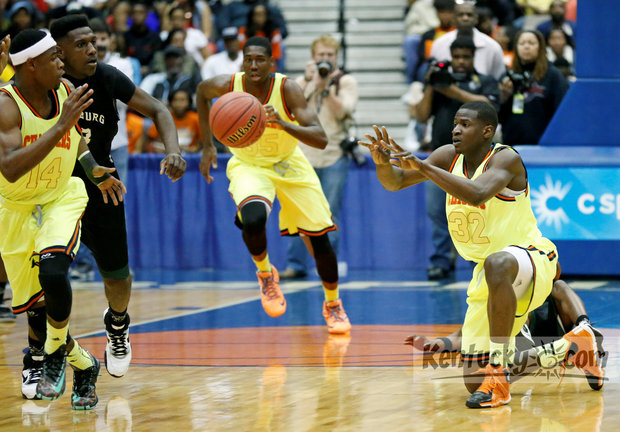 By ADAM ZAGORIA & CHIP MILLER BENTON, Ky. — Malik Newman’s father has no idea where his son will play his college basketball — and reiterates that his son won’t announce until April. “He said he is signing late, that is all he told me,” Horatio Webster said at the Marshall County Hoop Fest where Newman went off for 35 points, 4 rebounds 4 assists in a 76-65 loss to UNLV-bound Derrick Jones and Archbishop Carroll, and followed that up with a 42-point, 5-rebound effort in an 85-71 loss to Orangeville Prep. “Even my wife even asked me as late as last [Thursday] night, she asked, ‘Where do you think he is going?’ I said, ‘I don’t have any idea, we haven’t even talked about it.’” The 6-foot-4 Newman is projected as the No. 5 pick in the 2016 NBA Draft by DraftExpress.com. He has said he won’t announce until after the deadline for college players to declare for the NBA in April. Newman is considering Kentucky, Kansas, UConn, Ole Miss, Mississippi State and N.C. State, among others. He’s had home visits with Kentucky’s John Calipari, Kansas’ Bill Self, N.C. State’s Mark Gottfried, Mississippi State’s Rick Ray, Ole Miss’ Andy Kennedy, UConn’s Kevin Ollie, Texas A&M’s Billy Kennedy and Samford’s Scott Padgett, his father said. “Same as always,” Newman said. “It’s open to everyone still.” Newman didn’t even watch college basketball two years ago, but now his father says they will pay closer attention. “He’s started watching it now,” Webster said. “As it gets closer he will start watching and paying attention to the style of play, I mean Kansas, Kentucky, Connecticut, N.C. State, just everybody.” Newman recently took an unofficial visit to Kentucky for Big Blue Madness where Drake performed. “It was crazy,” Newman said. “It was an unofficial visit. The Big Blue Madness was crazy. It was really everything that I expected. The fans showed me a little more that I expected. It was crazy out there.” He also attended a couple of practices. “We went to two of them,” Newman said. “They were good practices. The guys were playing hard, they were getting after each other. It’s something that you like to see in the college ranks.” Newman reiterated that Isaiah Briscoe’s recent commitment to Kentucky wouldn’t deter him from going there, and in fact might encourage him. Briscoe has reached out to Newman about playing together. “I like Briscoe,” he said. “I think we could be a good backcourt together if that was the school I was to choose. Only time will tell. I think my game complements his and I think his game complements mine. His New York style of play, he’s always on the take and I’m always on the take so you really can’t double either one of us and it really kind of opens up the floor for both of us.” Kentucky will also likely return Tyler Ulis and Devin Booker. “I think those guys are good,” Newman said. “Like I said if that was the school I decided to go to, I think those guys could really help push me and get me to where I want to.” Meantime, Webster says he talks to Kentucky assistant Kenny Payne regularly. “We don’t have enough time to talk about what Cal says,” he said of head coach John Calipari. “Cal’s a great guy, I mean, he really is. He’s a great guy. Cal don’t really recruit. His program speaks for itself, so he really doesn’t have to say much. I talk with Kenny Payne almost everyday of my life. That’s my guy.” Kansas is also in the mix. Asked what Newman likes, Webster said: “Everything, I mean. Again, it’s Kansas basketball. To answer your question, I don’t know but he likes Kansas.” Meantime, Webster played at Mississippi State but said he doesn’t necessarily want his son following in his footsteps. “I’m going to be honest with you, I’m not going to have any influence on that,” Webster said. “I’m going to let Malik make his decision so whatever happens with his career, he’s responsible for it and not me. So I’m going to stay out of that.” Ole Miss is also in the mix. “I think he liked Coach [Andy] Kennedy’s style of play, but he also liked Coach [Rick] Ray’s style of play so, both of them are upcoming programs,” Webster said. “They’re both upcoming programs.” Newman has no visits planned right now, but could take some in December. “I think he may do some soon, here over the Christmas break he may take a couple,” Webster said. Photo: ROGELIO V. SOLIS — AP And like ZAGS on Facebook.