By JEREMY FUCHS NEWARK — When Isaiah Whitehead, Seton Hall’s prized freshman from Brooklyn’s Abraham Lincoln High School, scored 18 points against Illinois State in the final of the Paradise Jam tournament in the Virgin Islands, it was easy to take notice. But when Whitehead scored 15 points, with five assists, six rebounds and two blocks in a 58-54 win over George Washington at the Prudential Center, it was truly a pivotal moment. The Big East Preseason Rookie of the Year took over the game for the unbeaten Pirates (5-0) and GW (3-2) did not have an answer. His vision was outstanding on his dimes to Brandon Mobley down low, and his jumper was silky smooth. His tremendous athleticism was on display on one particular play in the first half. At the top of the key, Whitehead did a nice shake and bake move to drive to the hoop. Staying alert, he ran back down the floor for an emphatic block. “It’s just about facilitating first,” Whitehead said. “Now that I’m practicing a lot, I think I’m getting a feel for it.” 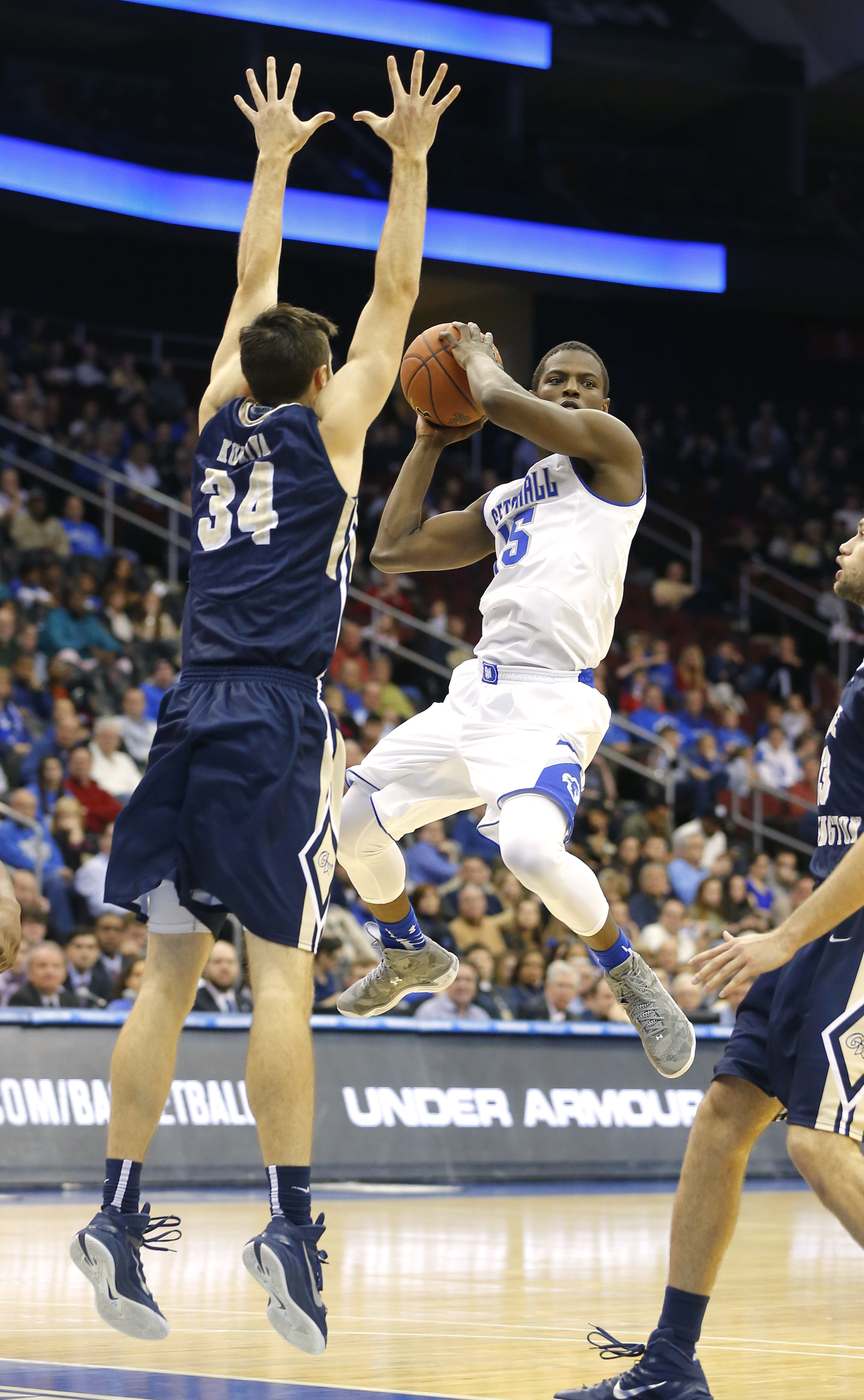 Whitehead is the leader of the loaded recruiting class that head coach Kevin Willard has brought in. He’s helped by Angel Delgado, an impressive 6-foot-9 forward who scored 10 points and had 10 rebounds against the Colonials, picked second in the A-10. Desi Rodriguez, a high school teammate of Whitehead’s, was sharp, with four points. Whitehead, the fifth McDonald’s All-American to choose Seton Hall and the highest rated New York City recruit since 2009, was ranked 14th on the ESPN100, and the second-ranked shooting guard behind D’Angelo Russell of Ohio State. Whitehead is ranked 34th on the DraftExpress 2016 NBA Mock Draft board. “Just taking my time, my shots are coming,” Whitehead said when asked about his progress. “Just playing off the ball, getting used to it. Just getting a feel. Everything has to be defense first.” But the 6-4, 210-pound freshman’s skills stand out above the rest of a talented Seton Hall team. “Whitehead can shoot it,” a NBA scout told SNY.tv in April at the McDonald’s All-American game. “Whitehead looks like a good player to me, that’s a good player for Seton Hall to get. He’s a good driver, good pull-up jumper, strong.” Whitehead has steadily improved since the beginning of his this season. After a tough debut against Mercer where he scored only two points, Whitehead rebounded with eight points each against Nevada and Gardner-Webb, before finishing the Paradise Jam with 18 points and six assists against Illinois State. 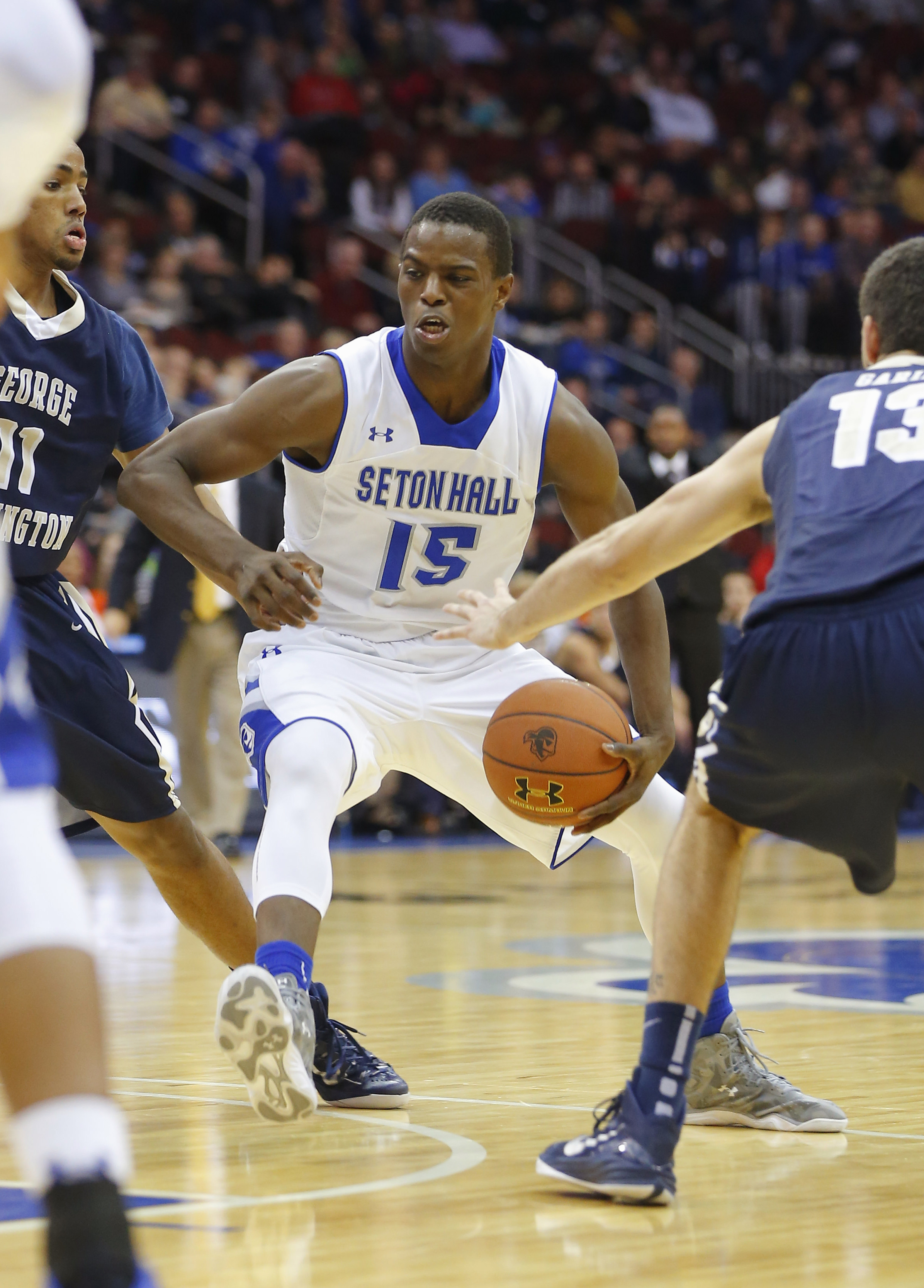 “I’ve put a loose leash on Isaiah with the shot selection,” Willard said. “He’s an unbelievable player, offensively, defensively, passing. It’s getting him to understand a brand new offense.” The freshman class for Seton Hall gives the Pirates hope for a brighter future. Coupled with junior guard Sterling Gibbs, who scored 11 against GW and 40 against Illinois State, the Pirates have a chance to stand out in an impressive Big East. “I think he took one bad shot today,” Willard said. “He gets a little excited on the break. He’s got to make a little better decision with his passes. In another week or two, I don’t expect that to happen.” Whitehead showed tremendous maturity when taking a charge towards the end of the game. Mobley was impressed. “That’s big time,” Mobley said. “It’s the little things that win games. He came in when he needed to.” Whitehead is the latest in a string of talented guards from Lincoln. Stephon Marbury, Lance Stephenson and Sebastian Telfair all starred at the Brooklyn school. Isaiah Briscoe, who Whitehead was openly recruiting to The Hall, ended up choosing Kentucky over St. John’s. Seton Hall was previously in the mix. “No, that’s my brother,” Whitehead told SNY.tv. “Wherever he goes, I support him 100 percent. He didn’t go here, but hey, just live with it.” Whitehead’s talent is evident; his play keeps getting better and better each game. What’s next for him and the 5-0 Pirates? “A lot of people were saying we weren’t that good just on who we played,” Whitehead said. “I think it just shows how mature we are.” Led by Whitehead, this Seton Hall team could surprise. FREE THROWS Bryce Aiken, T.J. Gibbs and Myles Powell were among the recruits on hand for the game. Photos: US Presswire Follow Jeremy on Twitter