Kyle Wiltjer Is Rooting for Kentucky…Until They Meet Gonzaga 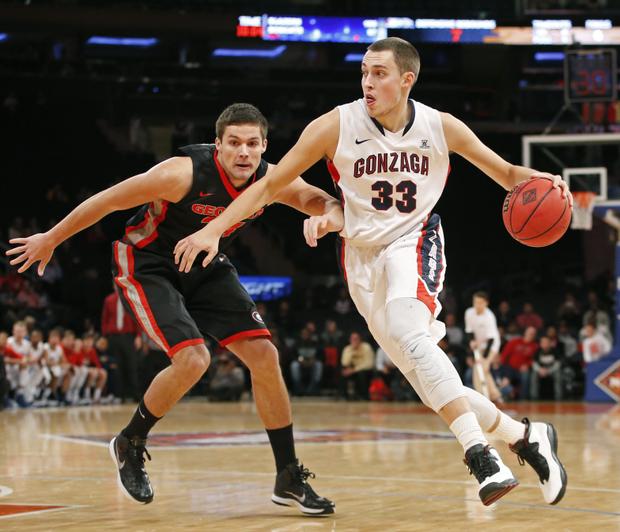 NEW YORK — Kyle Wiltjer is a high-scoring forward and an integral member of a team that some believe can win the NCAA championship come April. Two years ago, that description might have summed up Wiltjer’s role at Kentucky. But now that he’s found a new home at Gonzaga, the 6-foot-10 Wiltjer seems to fit in perfectly with his new team. In two games here at the NIT Preseason Tip-Off, he combined to score 40 points and grab nine rebounds en route to being named to the All-Tournament Team. The No. 10 Zags beat St. John’s, 73-66, Friday night at Madison Square Garden to win the NIT championship. “It was a good test for us, it was our first real road game,” Wiltjer, averaging 16.8 points and 5.2 boards on the season, told me in the Knicks locker room, which doubled as the Gonzaga dressing room this week. “It would’ve been nice to win by more, but I think it was a good test for us and I think that’s what we needed.” After pouring in a career-best 32 points in a semifinal win over Georgia Wednesday night, Wiltjer managed only 8 points on 3-of-9 shooting against the Johnnies. But five of his teammates reached double-figures to offset his off night. “I think it says how balanced we are, and how versatile we are,” Gonzaga coach Mark Few said. “He’s a tough guard. He’s a skilled power forward that can stretch you literally out to 25 feet, so you’ve got to adjust….If you do switch it, he’s pretty effective at taking those guards down and being patient and getting his shot down there. He wasn’t as good tonight, but this is kind of our team. If he makes a couple free throws tonight, we have six guys in double-figures, which is about right for us actually.” Wiltjer left Kentucky after a sophomore season in which he averaged 10.2 points on his way to earning SEC Sixth Man of the Year honors in what was a down year for the Wildcats. He remains in touch with Kentucky big men Alex Poythress and Willie Cauley-Stein, as well as several walk-ons. “Those are my good friends,” he said. Kentucky head coach John Calipari is running a 10-man platoon system in which he’s utilizing six bigs in Poythress, Cauley-Stein, Karl-Anthony Towns, Dakari Johnson, Marcus Lee and Trey Lyles. “A lot of my friends are still there, so it’s cool that they can do that,” Wiltjer said. Does he ever wonder what it would be like if he were in the platoon? “No, I’m focused on our season here and I don’t need to worry about that because I’m not part of the program anymore,” he said. “I stay in touch with those guys, but I don’t need to worry about that stuff.” Asked what the platoon system says about Kentucky, he said, “It shows that they’re a deep team as well.” Gonzaga might be one of the few teams in the country that could matchup down low with the Wildcats. After all, they feature the 6-10 Wiltjer plus two bangers in the 6-10 Domantas Sabonis (14 points, 8 rebounds) and 7-1 Przemek Karnowski (10 points, 7 rebounds). “Oh, it’s really nice,” Wiltjer said. “Playing along with these two big guys is really fun because they pass the ball really well and we look for each other which is fun.” Their height, combined with their depth in the backcourt, is one reason some, including ESPN’s Jeff Goodman, have picked the Zags to win it all. “The [NCAA] Tournament’s a great thing because all the top teams can compete with each other,” Wiltjer said. “So we just want to continue to get better over the course of the season and continue to get better with time.” As for his feelings for Kentucky, Wiltjer has nothing but good wishes. “Of course, those are my friends so I want them to do well until the time comes when we face each other,” he said. “I’m a competitor, I want to win, but those are my frinds so I wish them the best.” And of course, it’s always possible Gonzaga and Kentucky could face off when it really matters. “Who knows?” Wiltjer said. “Its’ a crazy tournament.” Photo: AP