For Better or Worse, the Johnnies Are Going Small | Zagsblog
Follow @adamzagoria

For Better or Worse, the Johnnies Are Going Small 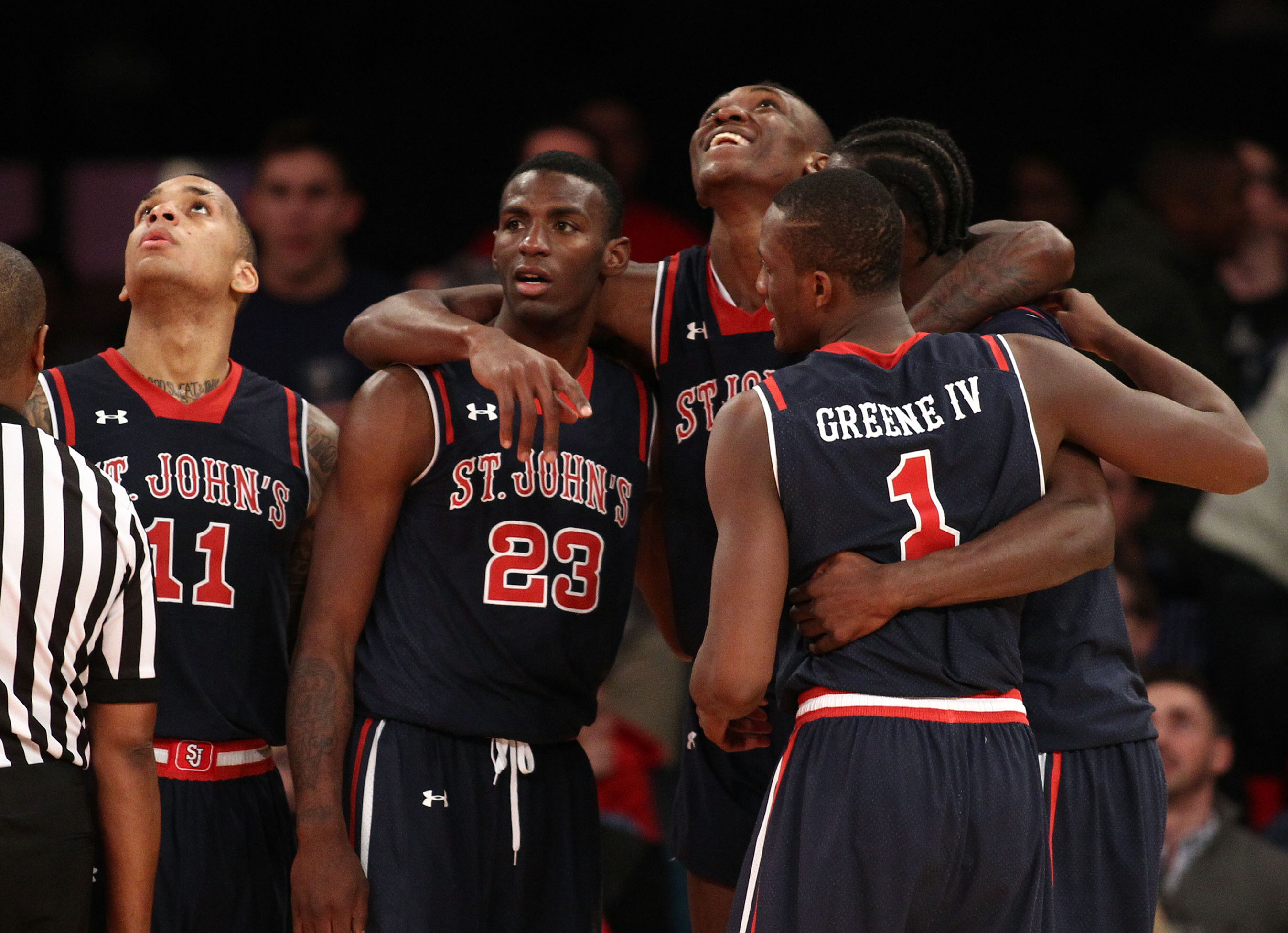 NEW YORK — As St. John’s coach Steve Lavin looked out and surveyed Gonzaga’s massive front line in the final of the NIT Preseason Tip-Off, he must’ve wished he had another big man to throw into the mix. Once 6-foot-9 Chris Obekpa fouled out in the second half, the Johnnies had nothing else in the way of bigs. Nada. Their biggest player was 6-6 Sir’Dominic Pointer. Still, the Johnnies’ small lineup closed to within three points in the final minute before losing to the No. 10 Zags, 73-66, in the championship game at Madison Square Garden. “Granted, with Chris Obekpa out, the leading shot-blocker in the country, it puts us at a real disadvantage,” Lavin said. “Gonzaga is a good team and they have a lot of size, a lot of lumber down low,” he added. “We just didn’t get over the hump in the last minute or so.” Gonzaga’s massive front line included 6-10 Domantas Sabonis, the son of the former NBA big man Arvydas Sabonis, and 7-1 Przemek Karnowski, a mountain of a man. Together, those two giants combined for 24 points and 15 rebounds. Yes, the Johnnies made a courageous run, getting to within 3 points on two occasions thanks to two huge 3-pointers from Phil Greene, who led St. John’s with 20 points, making 4-of-9 from the arc. There was a late-game offensive foul call on D’Angelo Harrison (15 points on 4-for-16 shooting) and some clutch free throw shooting by the Zags late. “My job is to play, the whistle didn’t go my way,” Harrison said. But the bottom line is this: If the Johnnies are going to make the NCAA Tournament this year, and make any kind of run, they’re going to have to do it with a small lineup essentially featuring Obekpa and four guards and wings. “We’ve gone small before,” Harrison said. “It wasn’t the bigs that was hurting us towards the end…Credit them. They found ways to win the game. We didn’t get stops when we needed to and the ball didn’t bounce our way at the end…We’ll get better.” Surely, Lavin would’ve loved to have had Keith Thomas to throw into the mix. The 6-foot-8 forward from Mount Vernon, N.Y. led all Division I junior college players with 15.7 rebounds per game and averaged 15.3 points in 32 appearances last season, but he was ruled academically ineligible in October. Adonis De La Rosa, a 6-10 freshman from Christ the King, is in a holding pattern while his academic situation is reviewed. Joey De La Rosa, Adonis’ 6-11 older brother, becomes eligible in late December and Lavin said he can help the team. “He’s a just a big, strong, physical, different than Chris,” Lavin said. “They’re a nice complement because they can play together. But if Chris is in foul trouble, he’s someone that can protect the rim so he’ll be helpful.” Still, despite fantasies about what might have been with Thomas or even JaKarr Sampson back in a St. John’s uniform, Lavin is intent upon focusing on his core of seniors — Harrison, Greene, Pointer and Jamal Branch, along with Obekpa and sophomore Rysheed Jordan, who, along with Harrison, made the All-Tournament Team. “At the end of it, this is the group that was going to dominate the minutes,” Lavin said. “We might have 8-10 for another reserve, but at the end of it, these six were going to dominate the minutes and then it’s just us figuring out who was going to be that seventh or eighth man. I don’t see anyone who came in this year who was going to knock any of those first six out of that 25- or 35-minute range, but Joey and Adonis will be helpful in terms of giving us some quality backup minutes.” Make no mistake. St. John’s has big ambitions this year for an NCAA Tournament appearance, and maybe even a run of some sort. But while this game proved their small lineup can compete with the elite, it also proved that if Obekpa gets in foul trouble, they have nothing else to back him up with…unless one of the De La Rosas can do something. That means the Kentuckys, the Texas’ and the Gonzagas of the world can just exploit them in the paint. “Obviously, we tried to attack inside/out on our end,” Gonzaga coach Mark Few said. “At the other end, with the small lineup, we’re just trying to contain them and get a hand up. They were able to hit two deep 3’s.” So this is pretty much it, St. John’s fans. The Johnnies are rolling with a small lineup plus Chris Obekpa because that’s all they’ve got. For better or worse. Photo: US Presswire