With Kansas On Deck, Kentucky Survives Scare From Buffalo 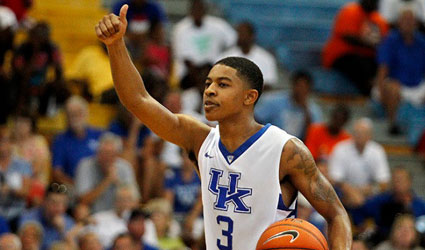 By JOSH NEWMAN Kentucky fans should probably hold off on burning those ’45-0′ t-shirts, at least for now. Four days after Southern Methodist head coach Larry Brown suggested the Wildcats should go ’45-0′ with all of their talent, they trailed by five at halftime on Sunday to Buffalo at Rupp Arena. That got cleaned up in a hurry, though, as top-ranked Kentucky held the Bulls to 21.1 percent shooting in the second half and had three players score in double-figures to pull away for a 71-52 victory in front 22,175 in Lexington. Tyler Ulis and Trey Lyles, two of a record nine McDoanald’s All-Americans for head coach John Calipari, each finished with a team-high 12 points, while sophomore big man Dakari Johnson had nine points to go along with 12 rebounds and four blocks for the Wildcats. With Calipari intent on platooning with this team, all 10 players who played went at least 10 minutes. Of the 10, nine played at least 18 minutes and six went at least 20. “And I know all of our fans, ‘Oh, we can’t ever lose a game. We can’t,'” Calipari said tongue-in-cheek. “Well there are going to be some L’s the way we’re trying to do this for a while until they get it.” The win comes two days before a highly-anticipated matchup against Kansas at Bankers Life Fieldhouse in Indianapolis as part of the Champions Classic. Kentucky-Kansas is the first end of Tuesday’s ESPN doubleheader, with Michigan State-Duke serving as the nightcap. The Champions Classic, which is in its fourth year, has become one college basketball’s great early-season events and is expected to draw more than 60 NBA personnel to the Heartland.  “It was good for us for somebody to come out and hit us in the mouth, for us to show what we’re about,” Ulis said. “It was a good start for them. They hit a lot of shots, which helped us, made us execute better at the end (of the game).” Buffalo head coach Bobby Hurley had his contract extended through the 2018-19 season after helping the Bulls to 19 wins last season, his first at the helm after serving as an assistant to his younger brother, Dan, at Wagner and Rhode Island. Bobby was 1-0 for his career against the Wildcats entering the day. The one win, of course, was the epic 1992 East Regional final, which featured Christian Laettner’s last-second turnaround jumper at the old Philadelphia Spectrum. “Obviously, being able to have a halftime lead against this type of opponent was a big thing for us,” Hurley said. “Hopefully, it is a confidence-building performance.” Photo: University of Kentucky Follow Josh Newman on Twitter