In Season-Opener, Rutgers Gets 'Punched in the Mouth' by GW | Zagsblog
Follow @adamzagoria

In Season-Opener, Rutgers Gets ‘Punched in the Mouth’ by GW 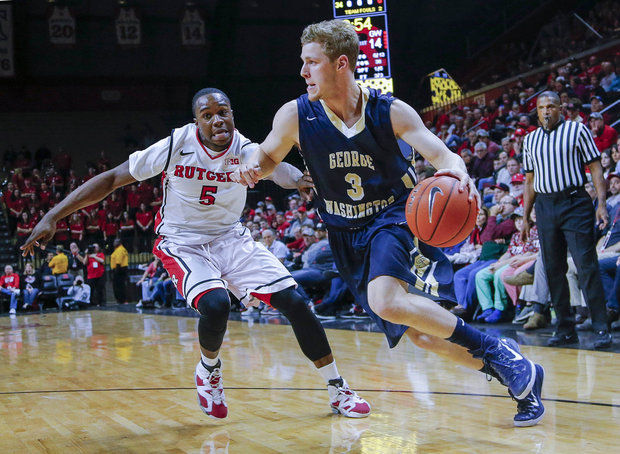 By JEREMY FUCHS PISCATAWAY, N.J. — Before Rutgers’ season-opener against George Washington on Sunday, senior guard Bishop Daniels said he had a plan for the Colonials. “What we plan on doing to them is, like I said, stepping on their throat,” Daniels told the Rutgers Daily Targum. How’d that one work out? Rutgers ended up losing to George Washington, 70-53, at the RAC, shooting a paltry 35.2 percent from the floor. Myles Mack outpaced all Scarlet Knight scorers with 14 points and added three assists. The next highest scorer was freshman guard Mike Williams with 10 points. Rutgers played without senior big man Kadeem Jack (sprained thumb). The Colonials capitalized on the missed shots and had seven steals to cruise to the easy victory. “We got punched in the mouth,” Daniels said after the game. “Can’t let that happen again.” “Hopefully, we can convert on Wednesday,” coach Eddie Jordan said. “I thought our defense was solid. They got some offensive rebounds and putbacks. We guarded their screening action, which is tough to guard. Our game plan, we executed. They didn’t get a lot of putbacks. Have to give credit to GW, that’s a tournament team. They played very well, they got into Myles early. When they get into Myles and we don’t have Kadeem, we will struggle.” GW is a talented team, with three scorers notching double-digits. Guard Kethan Savage led all scorers with 18 points, and first-team Preseason All A-10 pick Patricio Garino added 10 points. Impressive 6-8 freshman forward Yutu Watanabe, the third-ever Japanese player in Division I history, netted eight points. A tournament team last year, GW looks poised to challenge VCU in the A-10 after being picked second in the preseason poll. That said, they would be a middle of the pack squad in the Big Ten. The Big Ten has six teams in the AP Top 25, led by Wisconsin, a Final Four team last year, at No. 3. Shooting 35 percent from the floor will lead to blowouts against the cream of the Big Ten crop. The Scarlet Knights face a tough Big Ten schedule. After home games against Northwestern and Penn State, they play at No. 21 Nebraska, followed with a home game against No. 3 Wisconsin, two games against No. 24 Michigan, and games against No. 18 Michigan State and No. 20 Ohio State. Their schedule also includes a tough road game against a good Iowa team, which garnered a few votes in the AP Top 25. Mack can compete in the Big Ten. The 5-10 senior guard from St. Anthony averaged just under 15 points last year and could hit 20 this year. Without Jack and with Rutgers incorporating three freshmen, though, it was easy for GW to control Mack. “When I was coming up without the ball, they would deny me,” Mack said. “They did a good job at that. I got a couple baskets going backdoor. I think they did a good job of denying me and getting the ball out of my hands.” Rutgers moved the ball fairly well and played solid defense, holding the Colonials to 40.6 percent from the floor and only 6-of-21 from three. However, teams like Wisconsin will usually have better nights from the floor. Rutgers also missed Jack badly. “A lot,” Jordan said when asked how much the team missed Jack. “Even the fact that he can score helps us in a lot of other areas. He wasn’t out there. Other guys have to step up. I’m not really sympathetic about not having Kadeem.” The Scarlet Knight do have an impressive trio of freshman, who all looked good in their debuts. Shaquille Doorson, a 6-11 center from the Netherlands, looked solid on defense. Williams, a 6-5 guard from Brooklyn, played good defense and handled the ball well. D.J. Foreman, a 6-8 forward, stood out with his aggressive offensive game, and showed off his athleticism by charging down the lane and finishing with a monster slam in the second half. He finished with nine points. Those three will need to play important minutes going forward and could be building blocks for Jordan to build off of. “We’re coming off the bench with Shaq and Mike Williams and Foreman, they’re trying to get their feet wet,” Jordan said. “I’m giving those guys minutes. I’m going to live with those guys. We’ll have to live with their mistakes.” Rutgers takes on Fairleigh Dickinson at home on Wednesday. A year ago, FDU beat both Rutgers and Seton Hall. Things will have to change in order for Rutgers to get their first win. Photo: Jim O’Connor-USA TODAY Sports Follow Jeremy on Twitter