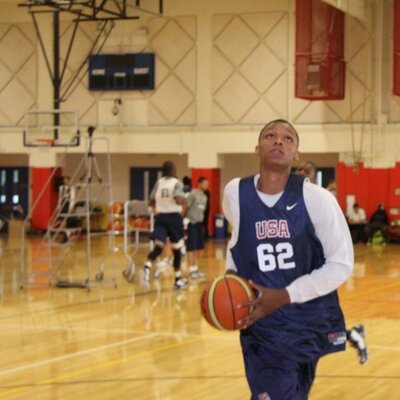 Ivan Rabb, the 6-foot-10 2015 big man from Oakland (CA) Bishop O’Dowd and the Oakland Soldiers, watched Kentucky’s Blue-White Scrimmage Monday night as part of his official visit, according to Ben Roberts of the Lexington Herald-Leader. Rabb will also “most likely” take an official to Kansas Nov. 7, his high school coach Lou Richie confirmed to SNY.tv after it was reported by Roberts. Rabb is down to Arizona, California, Kansas, Kentucky and UCLA, but hasn’t scheduled visits to the West Coast schools yet. Stephen Zimmerman, Rabb’s Soldiers teammate, also watched the Kentucky scrimmage on the SEC Network, his mother Tweeted. The 7-foot Zimmerman has already visited Kentucky. Roberts reported that Karl-Anthony Towns, the Kentucky freshman from St. Joe’s-Metuchen in New Jersey, went for 20 points, 13 rebounds and 3 blocks in the Kentucky scrimmage. “It felt really good,” Towns said. “Starting out I had some nerves, but I shook them off really quick and I felt that we had a great showing as the UK Basketball team. The whole squad came out and played well together; we showed some great spots and we just have to build on those.”

Skal Labissiere to Play for New Prep Team This Season