Briscoe Has ‘Great’ Mizzou Visit, St. John’s Up Next 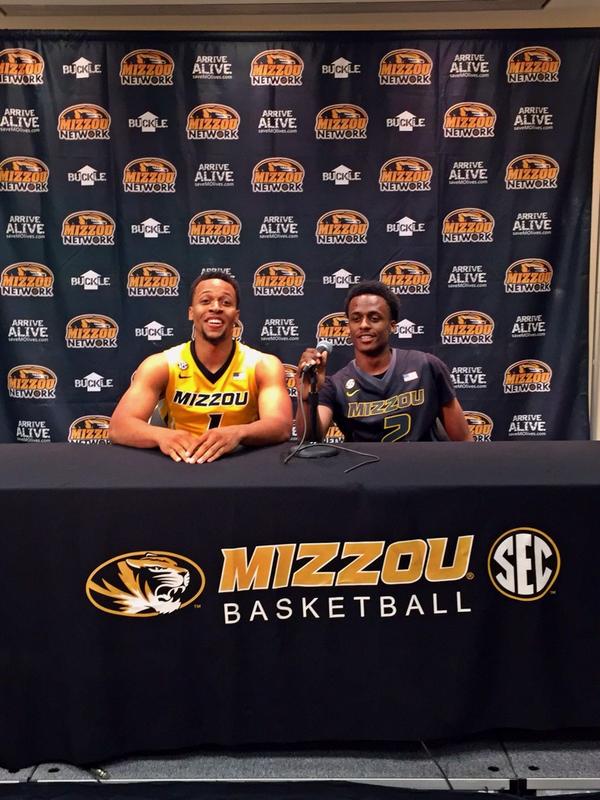 Isaiah Briscoe enjoyed a “great” visit to Missouri this weekend along with Antonio Blakeney and Thomas Bryant, and is planning on attending St. John’s Midnight Madness on Friday, his father told SNY.tv Sunday evening. “The visit went great,” George Briscoe said. “There are a lot Nike kids that played for the EYBL on Missouri’s team, so he knows a quite a few of them. And then he was with Antonio Blakeney and Thomas Bryant, so whatever they were talking about, they had a football game with 80,000 people shouting, ‘Briscoe, Blakeney, Bryant.'” The Tigers lost to Georgia, 34-0, in SEC football action, but the basketball visitors apparently had a great time. Briscoe and Blakeney, who have discussed playing together in college, took the above picture wearing Missouri uniforms in their media room. The 6-4 Blakeney decommitted from Louisville and is considering Missouri along with Kentucky, LSU and others, while the 6-10 Bryant is considering Mizzou along with Syracuse and Indiana and is expected to decide in the spring. “I think he had a great time, real talk,” George Briscoe said. “I don’t know what that means yet because I haven’t gone home and talked to him. I just let him enjoy the process. I never want to ask him how does this compare to St. John’s, UConn or Kentucky, I don’t want to do that to him while he’s out there. I don’t want him thinking about that. “When you 80,000 people in the stands, that’s not basketball, that’s football….I just let him enjoy it. Just every visit is different. They definitely surprised that this is a major D-1 elite program, that’s for me. The stuff that they have at Kentucky or Arizona or Duke or Georgia Tech or North Carolina or Syracuse, I’m surprised that they have all this stuff out here and no one’s coming. “I’m not saying it’s for Isaiah but he said he had a great time.” He also praised the staff. “Tim Fuller, Kim Anderson, Rob Fulford, they were great, the Missouri family has been great,” he said. Briscoe has now visited UConn, Kentucky, Seton Hall and Missouri in recent weeks, with St. John’s up next. George said he would definitely attend with his son. “Oh, [heck] yeah, I’ll be there,” he said. “St. John’s has been recruiting my son for too long for me to be blindsided.” Asked what he meant by that, George said, “I’m not just jumping because others are recruiting my son. You can print that because [St. John’s coach Steve] Lavin and the St. John’s family has been at Isaiah’s games, at the home, they’ve been at this thing for a couple of years now. “Oh no, we’re going to St. John’s. St. John’s has been great to Isaiah and they’ve been recruiting my son off their ass.” George expounded upon how his son might fit in at St. John’s. “New York, New Jersey, Connecticut, Philadelphia, I mean he’s made for that [stuff], that’s what he does,” he said. “I mean, New York is New York….You know the deal. So whatever his choice is when I get home to talk to him, we’ll see.”