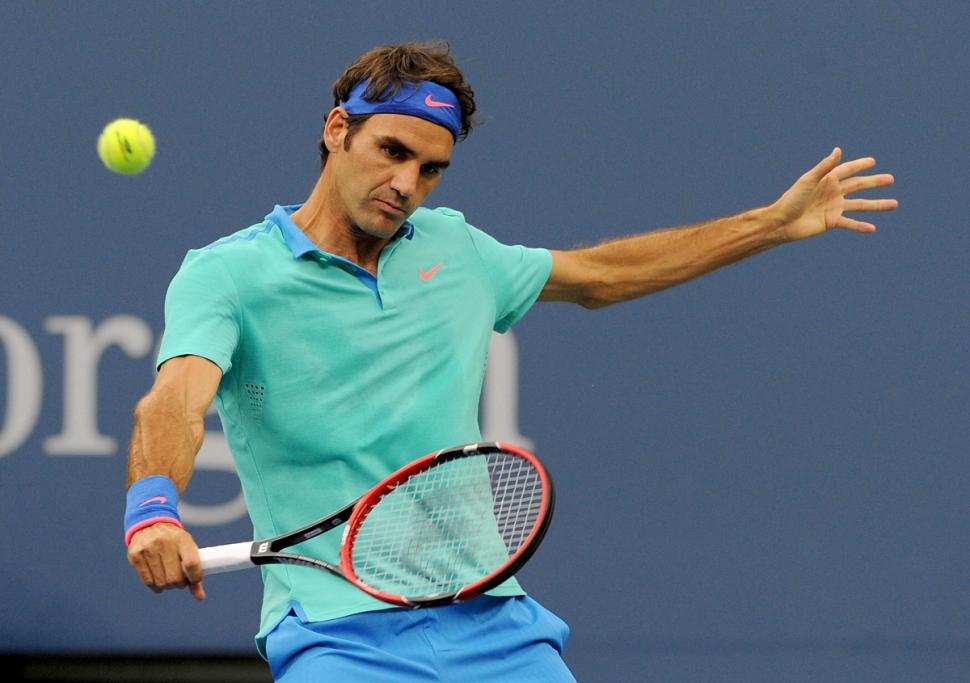 NEW YORK — While his arch-rival Rafael Nadal is missing yet another Grand Slam tournament with an injury, Roger Federer is playing in his 60th straight Major and continues to look like a man who could win one for the 18th time. Federer, the 33-year-old father of four, overcame a slow start and a rain delay of almost two hours to dispatch Marcel Granollers, 4-6, 6-1, 6-1, 6-1 to advance to the fourth round of the U.S. Open, a tournament he has won five times but not since 2008. In the fourth round, No. 2 Federer will face No. 17 Roberto Bautista Agut of Spain, a man he has never met before. Federer’s draw looks favorable for him to reach the final, especially after No. 4 David Ferrer — his potential semifinal opponent — was ousted Sunday by No. 26 Gilles Simon in four sets. Afterward, Federer was asked about his remarkable stretch of 60 straight Majors and what it says about his fluid style of play, which taxes his body much less than does Nadal’s grinding, punishing technique. “I mean, I’m happy I wake up every day and I’m ready to go,” said Federer, who has won 21 of his past 23 matches, including winning the U.S. Open tuneup in Cincinnati and reaching the final in Toronto. “It’s also great to see [Tommy] Robredo fit like a fiddle at the end last night. I thought that was impressive, too. He’s my age, too. I think when you keep yourself in shape and train the right way, that’s how you do it. Then actually it’s not such a surprise for yourself. But I’m clearly happy about it because it’s become a game of movement.” Federer wasn’t moving well at the start of the match, when he fell behind 0-3 and 2-5 before the match was stopped for two hours while rain pounded the Billie Jean King USTA National Tennis Center. After the day session was cancelled and the match resumed in the evening, Federer competed before a sparse crowd as the fans with night tickets slowly made their way into the stadium. Asked if he recalled the last time he played in a stadium that empty, Federer said, “I don’t know. I don’t remember. Could have been like not long ago, but I don’t know. At that point you’re not really concerned if there’s five people in the stadium or 20,000. Really it’s about getting back into the match. I thought it all worked out well at the end for fans, TV, us as well. It was a bit different feeling, but it was nice the way it filled up quickly. It was natural. There wasn’t ever any interruption. I think it was quite smooth actually.” Federer looked like a different player after the delay, in what he said were cooler, less windy conditions. He won 18 of the next 21 games by constantly moving forward and putting pressure on Granollers’s serve. Federer won the match with a forehand volley winner, capping an evening in which he won 32 of 51 points at net. 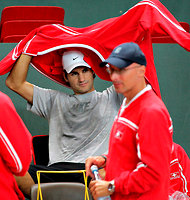 On air, John McEnroe said Federer’s longtime fitness coach Pablo Paganini, deserved a medal for helping to keep Federer in such good shape all these years. Paganini, 56, has been with Federer since 2000. “He’s not in the limelight,” Federer said. “He doesn’t show up much at tournaments, only from time to time. So the hard work gets done away from the tennis tournaments really. There’s only so much you can do during. There’s a lot of maintenance going on. We’ve worked together for a long time. We really got to know each other from 14 to 16, then not 16 to 19 because he left the Federation. Then I started with him again I think at 19 or 20 years old until now. He’s been a great man in my corner. I mean, clearly we’ve worked unbelievably hard and I think in the right way, as well, to keep me injury-free.” Last year, when Federer was the No. 7 seed here and was bounced in the fourth round by Robredo, he was dealing with back problems, and he said he and Paganini would constantly discuss how to best handle them. “I think last year was particularly challenging for both of us with the back problems I had,” Federer said. “Where do we go now? Are we allowed? What can we do? I think we were all training with the hand brake on and it wasn’t very enjoyable. He would always ask me, How does this feel? Is this dangerous for you? We just felt this was not the way to go, so we had to figure things out. I’m happy we did so. And the record continues, so I’m very happy about it.” Speaking with the New York Times in 2012, Paganini said Federer’s love for the game was his biggest asset. “I think it’s that his life is all related to tennis, but he also knows how to take a step back from it, which is really important,” he said. “He knows recovery is an important part of the process, so for him it’s natural to recover after a series of tournaments and then he’s even more motivated to start training again. What I find interesting is that he is just as motivated now as he was as a junior. I’d say even more so for the physical training. When he was young, he was an artist who wanted to be an artist. Now he’s an artist who knows exactly what he needs to do to express his virtuosity.” Photos: Daily New/ NY Times And Like ZAGS on Facebook.

Djokovic Advances to US Open Quarters, Andy Murray Up Next