Malik Newman in No Rush to Make a Decision 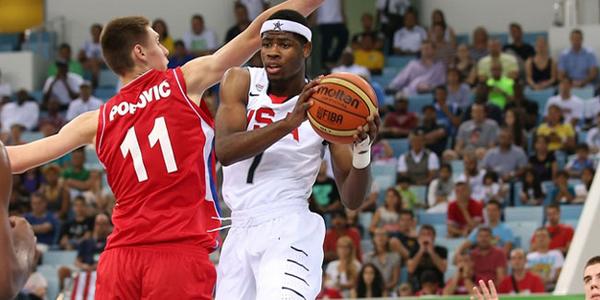 Malik Newman, the top point guard in the Class of 2015, is in no rush to make a college decision. “Just knowing Malik, from now until the time the season is over, [college coaches are] really just going to be wasting their time,” David Sanders, Newman’s coach at Jackson (MS) Calloway, told Ben Roberts of the Herald Leader. “Because he’s not going to think about recruiting. He’ll listen to what they have to say and enjoy his visits, but as far as making his decision — he is not thinking about it. That’s the farthest thing from his mind right now.” One source close to the recruitment said they expect Newman’s decision to come down to Kansas, Kentucky, UConn and N.C. State, but Mississippi State is also expected to be in the mix. The 6-foot-4 Newman, who recently played in the Under Armour Elite 24 game and won a gold medal with the USA U17 team at the World Championship in Dubai, will host in-home visits next month and has already hosted UConn coach Kevin Ollie. “I get that question from a lot of coaches, asking me what I think he’s going to do,” Sanders told Roberts. “And I think that’s because they can’t get a bead on him. They don’t know one way or another either. I just tell them, ‘I don’t know, Coach. The kid doesn’t let on anything.'” Newman has said he wants to attend the same college as 6-10 Milwaukee Dominican center Diamond Stone, who just cut his list to five schools:  Duke, Maryland, Oklahoma State, UConn and Wisconsin. Stone will announce his college choice Nov. 12, while Newman is not expected to announce until the spring. Of the schools on Stone’s list, UConn is thought to be the only school actively recruiting Newman, meaning Ollie is in position to land both players should they hold true to their package plans.

Chris Clarke Down to 7, Set for UConn Visit