Team USA Roster Set at 12 as Scene Shifts to Spain 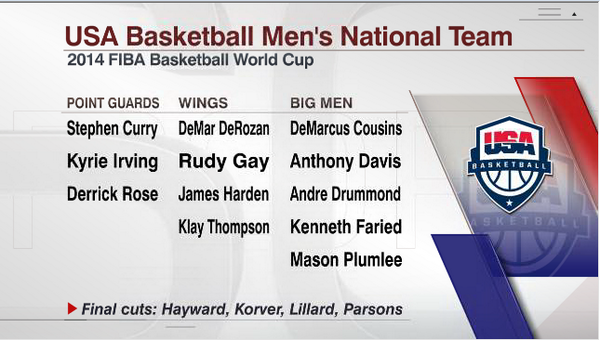 By JOSH NEWMAN In the wake of the United States National Team’s 112-86 win over Puerto Rico on Friday night at Madison Square Garden, head coach Mike Krzyzewski said he wanted to cut his roster from 16 to 12 before the team departed for Gran Canaria, Spain on Saturday morning. He wasted little time in doing just that. The 12-man roster that will play in the FIBA World Cup was finalized early Saturday morning and it can be seen by clicking on the picture above. The fact that Damian Lillard, Kyle Korver, Gordon Hayward and Chandler Parsons were the four cuts is not Earth-shattering, but the fact Krzyzewski is bringing five big men to Spain is noteworthy. Anthony Davis was a mortal lock to make the roster and Kenneth Faried was also considered to be in good shape throughout the process. DeMarcus Cousins played well enough to make the cut, as did Mason Plumlee, who played his way to Spain via the USA Select squad. That team scrimmaged against Team USA in Las Vegas during training camp before Plumlee was elevated to National Team consideration. Drummond’s inclusion comes as a bit of a surprise as it was looking like he was going to be the odd-man out with the other four big men outperforming him, but there is likely a method to Krzyzewski’s madness. The United States is on a collision course with Spain. The two could meet in the gold medal game on Sept. 14 with an automatic bid to the 2016 Rio Olympics at stake. If that happens, Spain is bringing with it a front line of Pau Gasol, Marc Gasol and Serge Ibaka. With that, bringing a fifth big could act as insurance. Team USA will play one last exhibition on Tuesday against Slovenia. It will play five pool-play games in six days in Group C at the World Cup beginning Aug. 30 against Finland. The round of 16 is Sept. 6, the quarterfinals are Sept. 9 and a World Cup semifinal would be Sept. 11 in Barcelona before the Sept. 14 gold medal game in Madrid. Under Krzyzewski, the National Team is 62-1 with the one loss coming in a World Championships semifinal to Greece. The United States is the defending world champion, having beaten hist Turkey in the gold medal game in 2010. Follow Josh Newman on Twitter