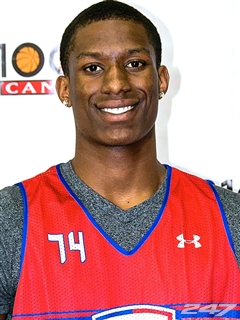 Horace Spencer, a 6-foot-8 power forward from Findlay Prep, received an offer from Rutgers head coach Eddie Jordan during his unofficial visit on Tuesday. “He did offer and he said Horace would end up playing the 4 spot if he comes there,” Horace Spencer Sr. told SNY.tv by phone. “They have a kid leaving and Horace would move right into that spot. He’s someone who can play multiple positions and guard multiple positions, so he could also play the 2 or 3 in addition to the 4. Horace would be able to fill that role very well.” “It went real good. We both liked the campus, liked the coaches, liked everything there.” Next up for Spencer is an unofficial to Auburn this weekend. “We’re going to Auburn this weekend to tour the campus and for an unofficial visit there also and then he goes back to school on Sunday at Findlay Prep,” Horace Sr. said. Spencer has also visited Seton Hall, Temple and UNLV. Seton Hall was attractive to the Spencers. “We like it there because of how it is in its own little community and their facility was up to date,” Horace Sr. said. “They were very forthcoming about what they wanted and they have a high graduation rate.” Temple also remains strongly in the mix. “I like the coach,” said Horace Sr., who lives right outside of Philadelphia. “Fran Dunphy is a guy who’s very sincere and honest. He’s not pushy. He didn’t try to convince me to tell Horace to come there and plus it’s close to home for me.” He added: “My son at first he wanted to stay close to home. Now that he went to Findlay Prep, he’s going to venture out further than home, but as far as me and the family, I would like to see him stay close to home. But he’s the one who has to go to school, not me. He has to feel comfortable and get a good education and start a career after that.” Horace Sr. listed a slew of schools still under consideration, including Rutgers, Temple, Auburn, Providence, UNLV, Purdue, Xavier, Cincinnati, Xavier, Oklahoma State, Oregon, Washington State, Georgetown, Georgia Tech, South Florida, Florida State, Florida. “We got to figure out how to cut it down,” he said. “We got a lot of schools, we have to figure out which ones he really wants to do.” Horace Sr. said there is no timetable on a decision but indicated his son might not sign until the spring. “Hopefully around springtime, we should know exactly what he’s going to do,” he said. “He has to do some official visits first.” FREE THROWS Southern Miss transfer Aaron Brown, who played at St. Benedict’s Prep, will visit Iona Wednesday and Rutgers Thursday…Rutgers will also have an in-home visit Sept. 9 with Showtime Ballers point guard Corey Sanders, sources told SNY.tv. Jordan and assistant Greg Vetrone aggressively recruited Sanders all summer. Follow Adam Zagoria on Twitter And like ZAGS on Facebook