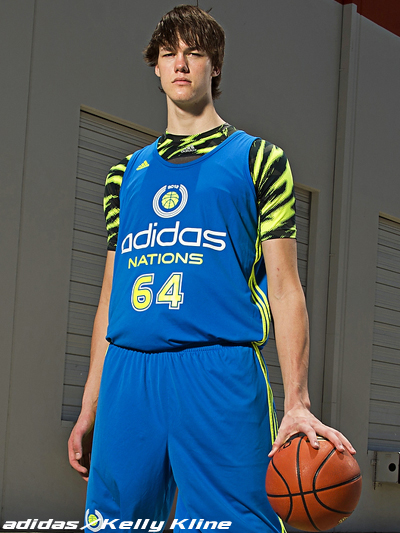 BY NICK MEDLINE SPECIAL TO ZAGSBLOG CHICAGO— Stephen Zimmerman stole the show on Saturday at the Nike Global Challenge. The Las Vegas (NV) Bishop Gorman center was — almost undoubtedly — the most valuable player at the event. He averaged 17.5 points and 11.5 rebounds while shooting 63 percent from the floor over four games. He also led Team USA West to an undefeated run, winning the championship against USA East. Zimmerman also earned praise from teammate Tyler Davis, who talked about how easy it was to play alongside Zimmerman because of his solid, vocal play. Zimmerman earned the MVP honors. He showed up and competed, and for all of the criticisms he faces, no one could guard him. With five officials and six in-homes lined up, he’ll soon be ready to make a team better. — Jalen Brunson highlighted the All-Tournament team with his stunning play throughout the weekend. He’s now risen to become the No. 15 prospect in his class according to Rivals.com. It makes sense. He always appears to be among the best players on the floor. He’s always capable of making the perfect extra pass. Better, he showed great scoring ability in transition. Brunson played especially well with Duke commit Luke Kennard. With the right supporting cast — and even without — he’ll be a superb get for any team. Brunson has five officials set. — D.J. Hogg was also outstanding, earning All-Tournament honors. With his recruitment down to six schools, Hogg dominated offensively. He’s one of the best shooters in the country, yes, but can also finish shots at the rim and plays tough every possession. Fellow West standout and Ohio State commit Austin Grandstaff also shot well — scoring 18 points with four triples in the tournament final. The mix of shooting and skilled bigs helped the West cruise to a win. They had the right balance and played extremely well as a unit. — Edrice Adebayo, Malik Monk and Jaylen Brown joined Hogg and Brunson on the All-Tournament team. All were predictably good. Adebayo was one of the most entertaining players in the tournament. He had 16 points and 12 rebounds in the final. And, of course, the scary part: He’s only a 2016 prospect. Monk, also a 2016 guy, must have earned the respect of his teammates. He owns the reputation of an excellent scorer, but was most impressive when making passes. There was some selfish play in the elite tournament. Monk instead used the weekend as an opportunity to help his team. And finally, Brown played exactly like any No. 1 prospect would. He’s capable of filling the stat sheet any game, and dominated at times. He wasn’t perfect — and turned the ball over too often — but looked the part of someone special. Other Key Players Follow Nick on Twitter Follow Adam Zagoria on Twitter And like ZAGS on Facebook

NBA Scout: Kentucky's Towns Could Be In Mix For No. 1 Pick, Cats' 2nd Five Better Than Most Teams' 1st