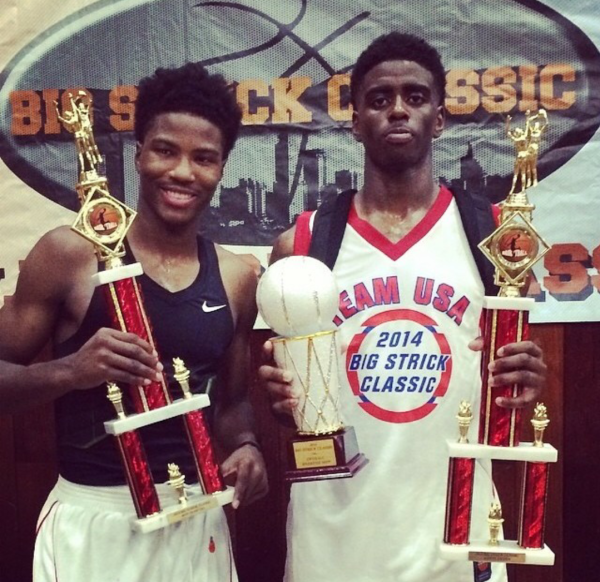 By RUSSELL STEINBERG Special to ZAGSBLOG NEW YORK — The raucous crowd that packed into the Gauchos Gym Saturday night got everything it could have wanted. In a back-and-forth game throughout, the Big Strick Classic came down to the final seconds, with Team NYC defeating Team USA, 137-135. In the game dedicated to the memory of streetball legend John “Big Strick” Strickland, both teams played with something to prove for 48 minutes. Rawle Alkins, a 6-foot-4 guard from Christ the King who said Indiana, Cincinnati and N.C. State are recruiting him particularly hard, took home co-MVP honors for Team NYC by scoring 17 points. His play was especially big down the stretch, when he scored six points to hold off a USA team that continued to chip away at NYC’s lead. Antonio Blakeney, who won the 3-point contest earlier in the evening, also won co-MVP honors and had 33 points for Team NYC. The 6-4 Blakeney out of Sarasota (FL) Oak Ridge  is considering a top seven of Florida State, Louisville, Missouri, Kentucky, Oregon, LSU and USC. Malik Beasley, a 6-foot-4 shooting guard from Alpharetta (GA) St. Francis who cut his list to eight schools on Friday night and will visit St. John’s on Sunday, went for 24 points and earned co-MVP honors for Team USA. Dwayne Bacon, a 6-6 shooting guard from Oak Hill Academy (Va.), also took home co-MVP honors behind a 30-point performance in the loss. That included a dunk to cut the USA deficit to two with 10 seconds left. Bacon’s award was just another accolade to add to his big weekend. On Friday he scored 58 points to steal the show at the event’s scrimmage. After Saturday’s game, he talked about his recruiting and what’s on the horizon. He will visit Florida State Sept. 5-7 and Tennessee Oct. 4-6, but with so many schools after him, is not ready to set a final list yet. UNLV, SMU, Clemson are other schools he may visit. “I’m not sure about anyone else right now,” he said. “I haven’t finalized any other dates.” “I want to be comfortable from when I walk in,” Bacon added. “I want to be comfortable with the coach and hopefully give him something that no player has ever given him.” Also on the USA side, Stephen Zimmerman went for 22 points and 10 rebounds and stood out right from the start of the event. The 7-footer held his own in the 3-point contest, made the first triple of the game for USA, grabbed the first three rebounds and was a force inside the entire night. He said that he knows he doesn’t play like the typical big man, but he is striving to be as consistent as he can, regardless of what role he needs to take. “I’m just trying to be the most ‘overall’ player I could be,” he said. Zimmerman has a visit to North Carolina on Oct. 3 – the first of five straight for the center. Kansas, Kentucky, UCLA and Arizona will all follow. The New York team was playing short-handed with Isaiah Briscoe out with a foot injury. Though he did not want to comment on his recruiting, he said his foot was starting to feel better, and even abandoned his crutches near the end of the game to cheer on his teammates from the sidelines. Photo: Malik Beasley Follow Russ on Twitter

7-4 Koumadje Names a Top 3, Will Remain at Montverde Academy