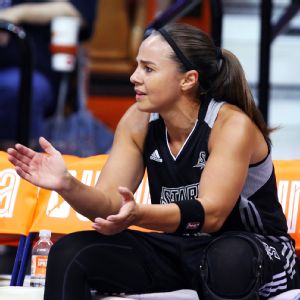 The San Antonio Spurs made history on Tuesday by announcing that former New York Liberty star Becky Hammon has been hired as an assistant coach. She is the second female assistant coach in NBA history, following Lisa Boyer, who served on the Cleveland Cavaliers’ staff under John Lucas in 2001-2. Boyer was part time and was not paid by the time, while Hammon will be a full-time paid employee. “It’s a tremendous challenge, and it comes with tremendous responsibility,” Hammon said Tuesday, according to The New York Times. “There have been so many other women that are doing really, really great things, and I’m just kind of following in their paths.” Hammon, who is currently in her 16th WNBA season, announced on July 23 that she would retire as a player at the conclusion of the 2014 season. Named one of the WNBA’s Top 15 Players of All-Time in July of 2011, Hammon ranks seventh in WNBA history in points (with 5,809), fourth in assists (1,687) and sixth in games (445). “I very much look forward to the addition of Becky Hammon to our staff,” said Spurs Head Coach Gregg Popovich. “Having observed her working with our team this past season, I’m confident her basketball IQ, work ethic and interpersonal skills will be a great benefit to the Spurs.” Hammon will meet the media Tuesday afternoon. A six-time WNBA All-Star, Hammon has spent the last eight seasons with the San Antonio Stars. She is the Stars all-time leader in assists (1,112) and three-point field goals made (493) while ranking second in franchise history in points (3,442) and games (218). In 2012 Hammon was the top vote getter for the Stars All-Decade Team. In her WNBA career Hammon has appeared in 445 regular season games, averaging 13.1 points, 3.8 assists and 2.5 rebounds in 28.0 minutes. She has earned All-WNBA First Team honors twice (in 2007 and 2009) and was named to the All-WNBA Second Team in 2005 and 2008. A three-time All-American at Colorado State, Hammon went unpicked in the 1999 WNBA Draft. She signed with the New York Liberty in May of 1999 and spent eight seasons with the Liberty before being traded to the Stars in a draft night deal in 2007. Release: Spurs Follow Adam Zagoria on Twitter And like ZAGS on Facebook