Andrew Wiggins: 'I just want to play for a team that wants me' | Zagsblog
Follow @adamzagoria

Andrew Wiggins: ‘I just want to play for a team that wants me’ 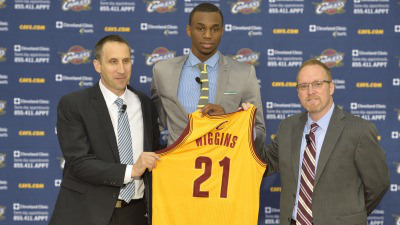 With reports circulating that Kevin Love is “likely” to be traded by Aug. 23 or 24, Andrew Wiggins’s days in Cleveland appear to be numbered. Appearing in a somewhat awkward interview on SportsCenter, the soft spoken Wiggins, the No. 1 overall pick in June’s NBA Draft, said he just wants to be wanted. “I just want to play for a team that wants me, so whichever team wants me I’ll play for,” Wiggins said. Asked if he expected to end up being a teammate of LeBron James in Cleveland, Wiggins added: “I don’t really know what to say. When I’m in Cleveland I’m going to play as hard as I can, give it my all and I’ll play for whoever.” The Cavaliers cannot trade Wiggins until Aug. 23, and Minnesota Timberwolves owner Glen Taylor told the St. Paul Pioneer Press that Love is “likely” to be traded by Aug. 23 or 24, when he could join forces with James and Kyrie Irving to give the Cavs their own Big Three. “I’m saying it’s most likely because Kevin has made it pretty clear that that’s what he wants to do,” Taylor told the Pioneer Press, adding that his preference is to keep Love in Minnesota. ESPN reported that the Cavs will likely ship Wiggins, former No. 1 pick Anthony Bennett and a future first-round pick to the Wolves in exchange for Love. “I think when you move somebody like Kevin, who’s been an All-Star, that you’ve got to get a number of players on your team that have the potential of replacing him,” Taylor told the Pioneer Press. “Flip [Saunders, Wolves president and coach] has looked at this team and offensively, he’s got a pretty good team. Defensively, it’s got to be better, so I think that’s where some of the areas will be replaced.” Wiggins said he has yet to speak with James, who opted to leave Miami to return home to Ohio in the Decision 2.0. “I haven’t [spoken to him],” he said. “I feel like I had a busy summer. It’s hard for me to get on the phone and really contact people so I can imagine what it’s like for him.” Wiggins said he thought it was “great” that James returned to the Cavs. “I thought it was great for the organization, Cleveland, and it would be great for every player on the team to learn from the best and pick his brain to see what it takes to get to his level,” he said. As for the speculation surrounding his future, Wiggins said he has no control over it. “No, right now I’m just taking it day-by-day,” he said. “What happens in the future, happens. I can’t control nothing, it’s out of my hands. At the end of the day you have to remember that the NBA is a business before anything. “I’m just waiting to hear. I’m a rookie, I don’t really have too much say.” **For previous articles on Andrew Wiggins, click here. Follow Adam Zagoria on Twitter And like ZAGS on Facebook