Ivan Rabb Could Package With Newman & Stone at Kansas or Kentucky 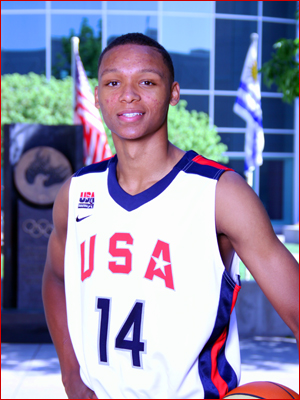 NORTH AUGUSTA, S.C. — Malik Newman and Diamond Stone aren’t the only ones talking about going to the same school together next year. Ivan Rabb, the 6-foot-10 forward from Oakland (CA) Bishop O’Dowd and the Oakland Soldiers, told SNY.tv he wants to join up with Newman and Stone, too. “Me, Diamond and Malik, we’re all planning to kind of go to school together,” Rabb said at the Peach Jam. “But I’m not really 100 percent. They’re more serious than I am because we all have different schools  that we’re looking at…so I make my own decisions at the end of the day because I’m my own man. But if the opportunity is right and I think it’s a good decision, then maybe that might happen.” Rabb and Newman will both be in Colorado Springs, CO beginning this week for the USA Basketball U17 trials (where several hundred coaches are expected on Friday) and will talk more about it there, just as Jayson Tatum told SNY.tv he plans to have similar conversations with fellow U17 players Harry Giles, Seventh Woods and Dennis Smith. Rabb, Stone and Newman were all roommates in 2013 when the USA U16 team won the gold medal in Uruguay. “We saw it at the USA games,” Rabb said. “We were all really efficient in those USA games. We’re all really efficient, we love playing together. In USA it’s us three all the time, no matter what we’re always together. We’re like best friends. We talk to each other every day on the phone.” Rabb said he and the 6-10 Stone complement one another’s game at the four and five. “He can go inside, he can also go outside and I can do the same thing,” Rabb said. “He can also pass the ball and he’s a really good low-post scorer and I can score on the block. I think we complement each other. Stone recently said he will announce his college choice Nov. 12, while Newman hasn’t picked an announcement date yet, fueling speculation that the two won’t land at the same school after all. UConn, Kentucky and Kansas are perceived as the three schools with the best chance for the pair, but Stone is also being courted hard by home-state Wisconsin (among others), while Newman has also mentioned N.C. State, Miami and Florida. Still, Rabb said the trio has talked of playing at two big-time schools. “The two biggest ones are Kentucky and Kansas,” Rabb said. “Those two are on all our lists so that’s kind of why. We just talk about those.” Rabb said he plans to visit both schools. On Kentucky:  “Yeah, I think that’s a good visit for me to go on. [2015 commit] Charles Matthews has really been trying to get that visit with him, so we talk a lot. That’s my guy.” On Kansas: “Kansas, I’m really interested in that school so I think I might end up at least taking a look at them if not taking an official.” Rabb is also being courted by Cal, USC, UCLA, Arizona, Georgetown, Duke and North Carolina, and plans to cut his list after the summer. “I’m still trying to figure out the five I’m going to take because I can only take five,” Rabb said. On Cal, which he likely won’t take an official to because it’s so close: “It’s only 15 minutes from my home…I like everything about Cal-Berkeley.” On Georgetown: “I liked the city, Washington, D.C. The campus was great. All the coaches. I met big coach, Coach John Thompson. I went to his house, we talked for a while. They took me to the big man gym, that’s where all the battles happen, and that’s what I like about that school.” On Duke: “They recently offered me a scholarship during LeBron camp, they offered me. The visit, we just kind of talked for about an hour with all the coaches in the room, just me and my mom. And just had a good conversation about things that I can improve on, things like that.” On North Carolina: “I like the town, it’s kind of like this town a little bit, it’s kind of quiet. We went to the gym, the gym is enormous. I didn’t realize how big it was, how many people can fit in there. I like the whole coaching staff. They made me feel like family. We joked around, we laughed a lot. That’s what I’m looking forward to, is a family atmosphere.” On USC and UCLA: “I haven’t been there. I was supposed to go there and Arizona in three or four days, but plans fell through. We had a family emergency so I couldn’t do it.” On Arizona: “I used to get irritated the last few years people just always telling me since I’m playing for the Soldiers that I’m automatically going to Arizona, which is not true. But now I don’t let it get to me. I’m just looking at them from a basketball player’s standpoint. They have a good coach, they win a lot of games and they do some things that I like in their program.” Rabb conceded that getting him, Stone and Newman — three guys from different parts of the country (California, Mississippi and Wisconsin), different AAU teams and different sneaker sponsors (Stone is on the Under Armour circuit and Newman and Rabb play on the Nike circuit) — could be tough. “We talk about it and then maybe it’s not the right choice,” Rabb said. “Normally [it’s] two, not three [players talking about a package]. It’s definitely hard to make it happen because everybody has to be happy in that situation. The easiest part is saying that you’re going to go there but once you get there you have to find out how well it’s going to work, the ups and downs of things that can happen.”

USA Basketball U17 Trials to Draw Players, Coaches Away from AAU Events; Serves as Incubator for Potential Package Talk