Here’s a quick roundup of some recent recruiting news: **Greek forward Konstantinos Mitoglou has signed with Wake Forest beginning with the 2014-15 season. “We are excited to welcome Dinos into the fold,” said head coach Danny Manning. “He is a skilled big man who is just scratching the surface of his potential. He comes from a wonderful family, and he has been well-coached throughout his young career. We are looking forward to getting him on campus and integrating him into our team.” The 6-10, 225-pound Mitoglou (nicknamed “Dinos”) is one of the top young players in Greece and will suit up for the country’s U18 national team in this month’s U18 European Championship July 24 through Aug. 3 in Konya, Turkey. A native of Thessaloniki, Greece, Mitoglou played for Greece in the 2013 U18 European Championship. Mitoglou averaged 5.8 points, 7.0 rebounds and 1.1 assists per game while shooting 49 percent from the field during the tournament. A starter for Greece, Mitoglou led the team 15 points on 6-of-8 shooting with eight rebounds in an 85-65 win over the Czech Republic last year. He also pulled down 13 rebounds and dished out four assists in a 76-51 win over Ukraine. 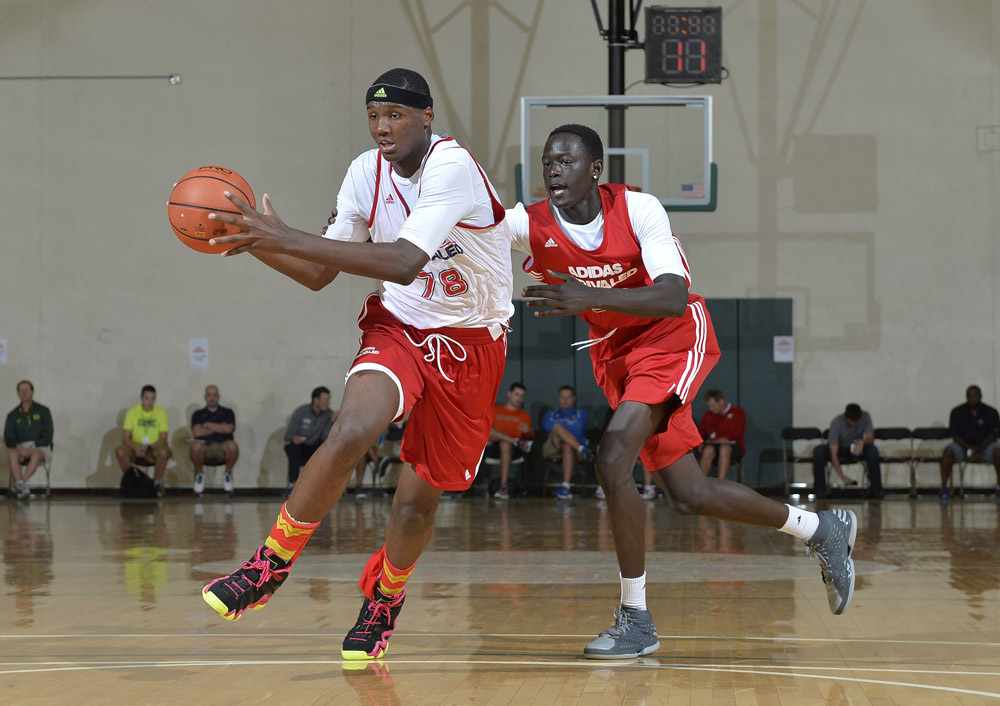 **Carlton Bragg will visit Kansas Oct. 10 for “Late Night in the Phog.” The 6-foot-8 power forward out of Cleveland (OH) Villa Angela-St. Joseph plans to cut his list to five on Sept. 1 and previously told SNY.tv that Illinois, Kansas and Kentucky will make his final list. **Kentucky offered 6-8 center Caleb Swanigan of Fort Wayne, IN (Homestead), according to Scout.com. That followed a strong performance at the Peach Jam, where Swanigan made the ZAGSBLOG All-Peach Jam 1st Team. Kentucky has now offered in excess of 20 players in the Classes of 2015 & ’16. **North Carolina extended offers to 2016 Bentonville (AR) guard Malik Monk, who went off for 40 points in one Peach Jam game, and Skal Labissiere, the 6-10 2015 big man from Ridgely (TN) Evangelical Christian School. Both offers were reported by Scout.com. **Donovan Mitchell, the 6-3 shooting guard from Brewster (NH) Academy, continues to pile up offers, adding them from Wichita State and Auburn, he told SNY.tv. **Christ Koumadje, the 7-4 African big man whom I profiled here, will visit UConn Aug. 22 and Houston Aug. 29, his mentor told SNY.tv. Koumadje, a native of Chad, is a huge Hakeem Olajuwon fan so Houston has an appeal for him. Also, both Koumadje and 6-11 Ifeanyi Umezurike are leaving Montverde (FL) Academy for the Village Christian School (CA),their mentor said. **Former UConn commit Prince Ali will take officials to UCLA Aug. 31 and Louisville Sept. 6, Sagemeont (FL) School coach Adam Ross told SNY.tv. **Jayson Tatum, the 6-8 2016 St. Louis Chaminade guard who impressed mightly at Peach Jam, added a UCLA offer, per Evan Daniels of Scout. **Cheick Diallo, the 6-9 2015 big man from Our Savior New American, will be sidelined for the rest of July with back issues, sources confirmed to SNY.tv. Diallo suffered back problems at the Peach Jam, but they are thought not to be serious, just the result of wear and tear. Diallo has visited Kentucky and Pittsburgh and is also considering Kansas, Iowa State and St. John’s. **Bruce Brown, a 6-3 2016 combo guard from Vermont Academy, has added offers from Arizona State, Texas Tech, Virginia Tech and Providence in recent days. **Virginia and Davidson offered 2016 Iona Prep/New Heights point guard Ty Jerome.