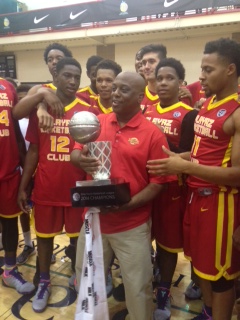 By JACK LeGWIN Special to ZAGSBLOG NORTH AUGUSTA, S.C. — Isaiah Briscoe scored the final two points of the 2014 Peach Jam from the foul line after a controversial technical foul call with 3.8 seconds left and the Playaz Basketball Club held on for an 85-83 victory over Team Penny on Sunday afternoon. It was the first Peach Jam title for coach Jimmy Salmon and the Playaz. “Coming into this year at the beginning of the season, I told coach that we could win Peach Jam,” Briscoe, a 6-foot-3 rising senior out of Roselle (N.J.) Catholic who finished with 20 points, 12 rebounds and 7 assists, told SNY.tv after the win. “We all bought into what we had to do, and as you can see, we came out on top.” A controversial technical foul call on Dillon Mitchell at 83-83 gave the Playaz two free throws with 3.8 seconds left, both of which Briscoe knocked down with ease. “I’ve been with this program for seven years,” Briscoe said. “I told them that this is what I wanted, I wanted to win Peach Jam before I left, so they put me on the line.” Assistant coaches from Arizona, Louisville, St. John’s, Rutgers, Seton Hall and Villanova were on hand to watch Briscoe, who is considering those schools and discussed them with SNY.tv here. If the Peach Jam handed out Most Outstanding Players honors, Briscoe should be the recipient. But he was helped by a strong supporting cast. Syracuse-bound power forward Moustapha Diagne of Sparta (N.J.) Pope John went for 16 points, 14 rebounds and 6 blocks. T.J. Gibbs, a 2016 guard from Seton Hall Prep who was brilliant all tournament long, had 19 points, 5 assists, 3 rebounds and 3 steals. Trevon Duval, a 2017 guard from St. Benedict’s Prep, tallied  12 points and 3 assists, and 2015 guard Eli Cain of St. Benedict’s had 11 points, 5 rebounds, 4 assists and 3 steals. Florida-bound guard Kevaughn Allen went for 22 points, 3 rebounds and 3 assists in a losing effort. Memphis-bound 2015 forward Keelon Lawson had 20 points, 10 rebounds and 8 assists, while his brother Dedric Lawson, a 2016 forward who committed to Memphis before the final, went for 14 points, 8 rebounds 5 blocks and 4 assists. P.J. Washington added 14 points, 8 rebounds and 3 blocks for Team Penny. This is the 19th year of the Peach Jam and four programs have won it twice: Boo Williams, Riverside Church, the New York Gauchos and the Illinois Warriors. Since the EYBL began in 2010, the event has been won by Team Takeover (2010), BABC (2011), the Oakland Soldiers (2012) and E1T1 (2013). Now the Playaz, who went 13-3 during the EYBL season, are added to that list. In the first semifinal, Team Penny beat Boo Williams, 77-68, behind 17 points and 12 rebounds from Keelon Lawson. The second semifinal was a matchup of Northeast-area teams when the Playaz met Team Scan. The Playaz beat Scan 65-55, behind Briscoe’s 18 points and 3 rebounds, Gibbs’s 13 points 4 steals and 2 rebounds and Diagne’s  11 points and seven boards. For Team Scan, Tyus Battle led the way with 18 points and 5 rebounds, while Cheick Diallo had 13 points, 11 boards and 3 blocks. Follow Jack on Twitter